Posted on November 2, 2010 by George Backhus

The Kasbah of Rabat

The weather forecast called fresh easterly for the Strait of Gibraltar, we tossed off the lines that attached Moonshadow to the Queensway Quay Marina in Gibraltar Town.  By the time we were out of the Bay of Algeciras, we had 20 to 30 knots on our backs, helping to slingshot us out into the Atlantic Ocean against the 2 knot current flooding into the Mediterranean Sea. 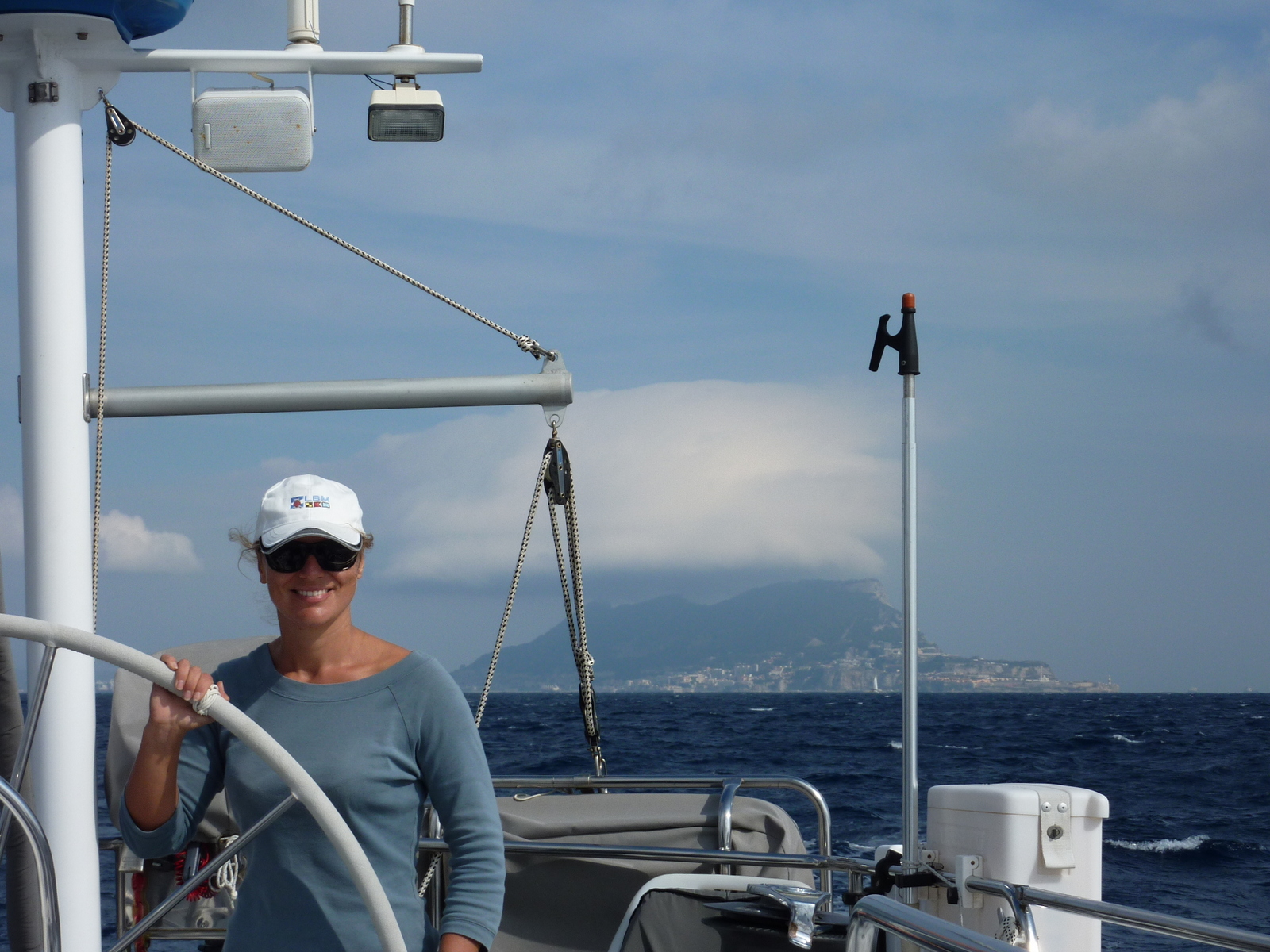 Our first gybe took us across the commercial shipping lanes at a fairly obtuse angle.  We gybed onto starboard close to the Moroccan coast where we caught a nice 4 kg. mackerel tuna.  As the strait narrowed, the wind against tide effect increased and we encountered some very rough patches in the water.  A couple more gybes kept us to the south of the shipping lanes until the strait opened up into the Atlantic Ocean.  The Atlantic welcomed Moonshadow back into her waters for the first time in 15 years with calmer seas and lighter breezes.

In the Strait of Gibralter we had to dodge mega container ships like this that can carry up to 15,000 20-foot container equivalents (TEU’s)

The rest of our overnight passage to the capital city of Rabat in Morocco was uneventful and we arrived a few hours before high tide.  Two other arriving boats were waiting for the pilot to escort them to the Bouregreg Marina a mile up the river.  With a spring tide and very little swell, the pilots guided us up to the Customs dock without incident.  The shallowest we saw was 4.7 meters over the first bar, but the depth sounder went crazy after we crossed the bar into water that was muddy and full of debris. 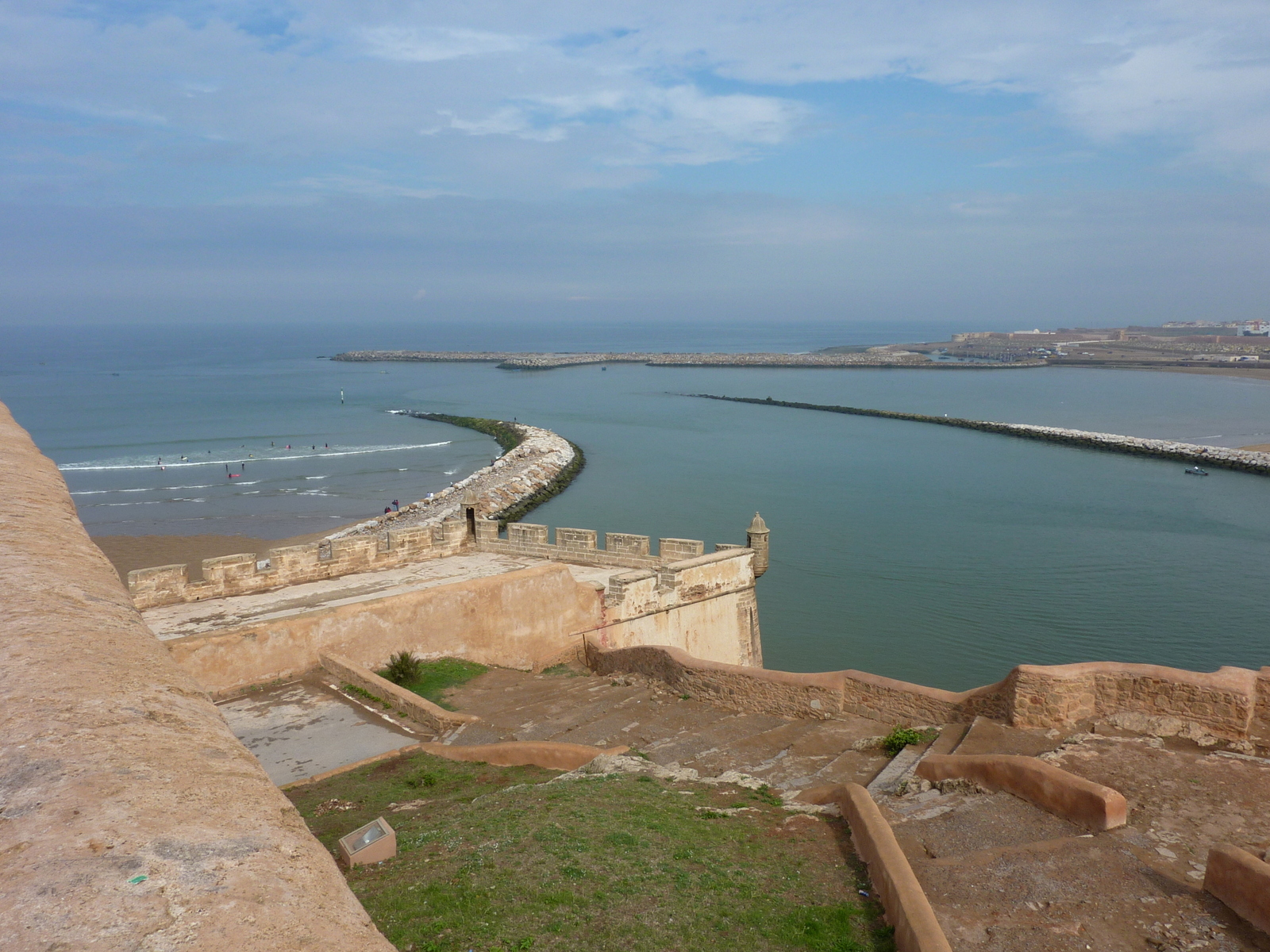 The bar at Rabat looks fine here, but waves break at the entrance when the swell builds up in the north Atlantic

Shortly after the three yachts rafted up to the short Customs dock, we were boarded by a group of very polite and smartly dressed officials who processed our entry paperwork in about a half an hour.  There was not even the hint of baksheesh (bribes or tips) and the check-in was a delightful experience.   That is till the large German shepherd drug sniffer dog and his handler showed up for the final inspection of our yacht.  The dog had big hard claws and was hyperactive, but after a quick sniff around the cabin, he was off to the next boat.

Bouregreg Marina is on the Salé side of the Bouregreg River.  It is a new facility with all the usual amenities.  A few trendy cafes and restaurants have sprung up along the quay and more are planned as part of a large residential/commercial waterfront complex.  Salé is, however, a very old and fundamental Islamic enclave which is intolerant of many western ways, so none of the establishments in the marina sell alcoholic beverages.

We set out on foot early the next morning to explore the medina, or old walled city, of Salé.  Walking through the bab (gate) was like being transported back in time a thousand years. Other than a few cars and ATM’s, mod-cons are almost non-existent.  We found the central market and the Grand Mosque and then got lost for a few hours in the labyrinth of narrow pedestrian-only streets.  Salé does not see many tourists so we were noticed but not harassed in any way.  We were fascinated to observe people going about the business of life much as it has been done for centuries, watching people doing things by hand the old fashioned way. 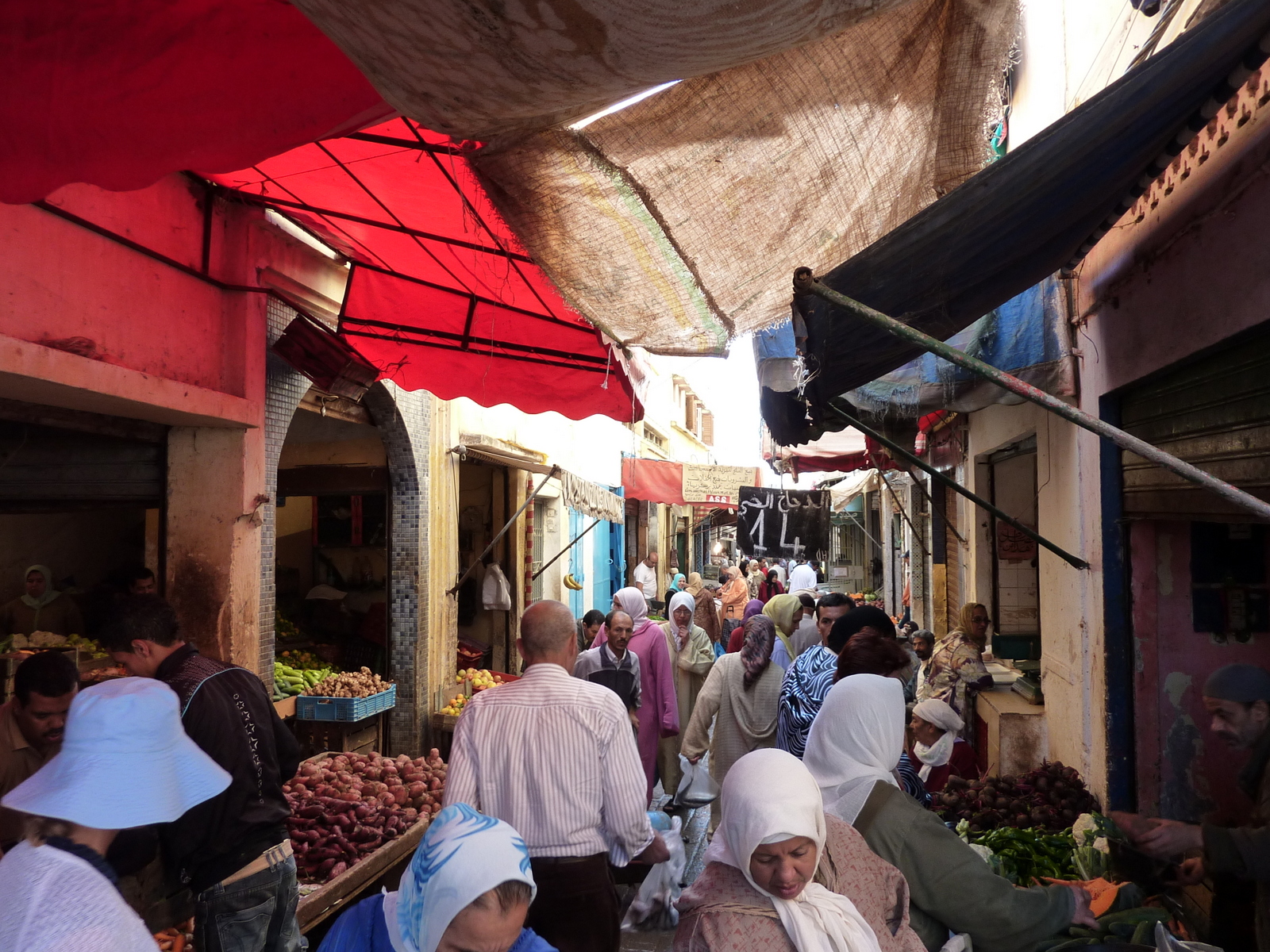 Daily life in the Medina at Sale A shoe merchant displaying the very latest styles.  Notice all the gold pointy ones in the back. 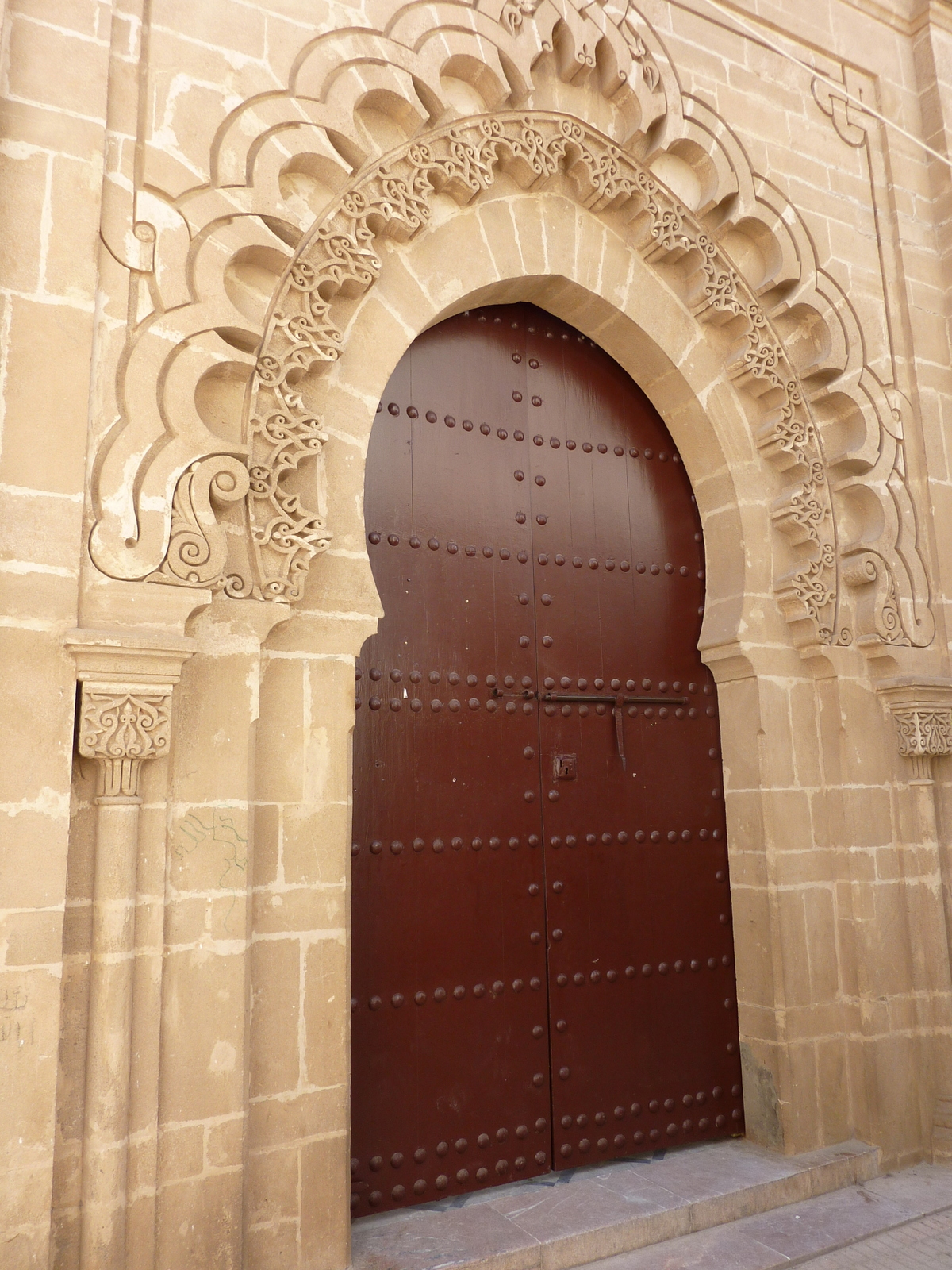 The ornate entrance to the Grand Mosque in Sale A rather interesting character we spotted in Sale

We were welcomed to Bouregreg that evening with a cruiser’s happy hour aboard Tahane Lee by Phil and Corelle, where we met and socialized with the other transient cruisers who were on stopover in Rabat.

The next morning we headed over to the Rabat side of the river to see a bit of the capital city.

We started first in the Kasbah, a quiet old residential enclave enclosed in what was once the ribat (fortress) that guarded the entry to the port.  We wandered around the narrow streets enjoying the beautiful doors and interesting homes and took in the old Andalusian Cathedral and its adjoining gardens. The entrance to the Kasbah in Rabat A quiet back street in the Kasbah The Andalusian Cathedral in the Kasbah Musical instruments for sale in the Kasbah

The restaurant that we had hoped to visit for lunch was closed but a man guided us to another place that occupied an ornate old home, which was not even marked by a sign.  We enjoyed an excellent tajine (clay pot stew) in the enchanting atmosphere. The courtyard of an old Rabat home converted to a restaurant

The afternoon was spent afternoon shopping in the medina of Rabat where we found some excellent bargains on locally made goods. Heavily laden with our purchases, we hired an oarsman to take us back across the Bouregreg River to the marina.  We enjoyed another tajine that evening ashore with the Windies. Shopping is excellent in the medina of Rabat

A fresh northeasterly was forecast, which would give us a fast ride down to the Isla Graciosa in the Canary Islands, situated about 465 miles to the southwest of Rabat.  As much as we enjoyed the people, atmosphere and food of Morocco, we decided to take advantage of the excellent weather window and head out.

We’ll leave you with a series of photos we shot of some of the beautiful doors in the Kasbah of Rabat and in Sale. The entrance to a 12th century university in Sale 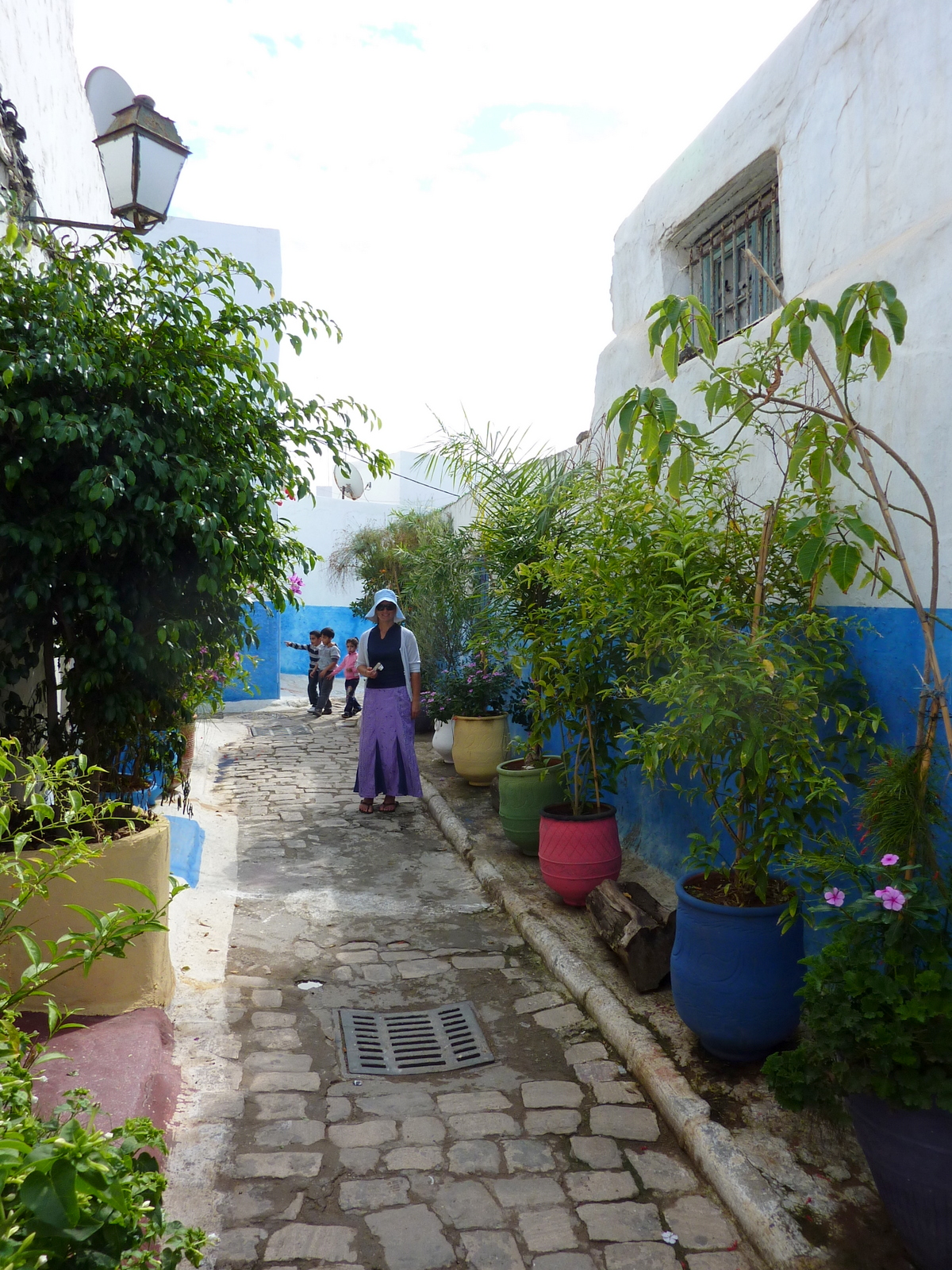 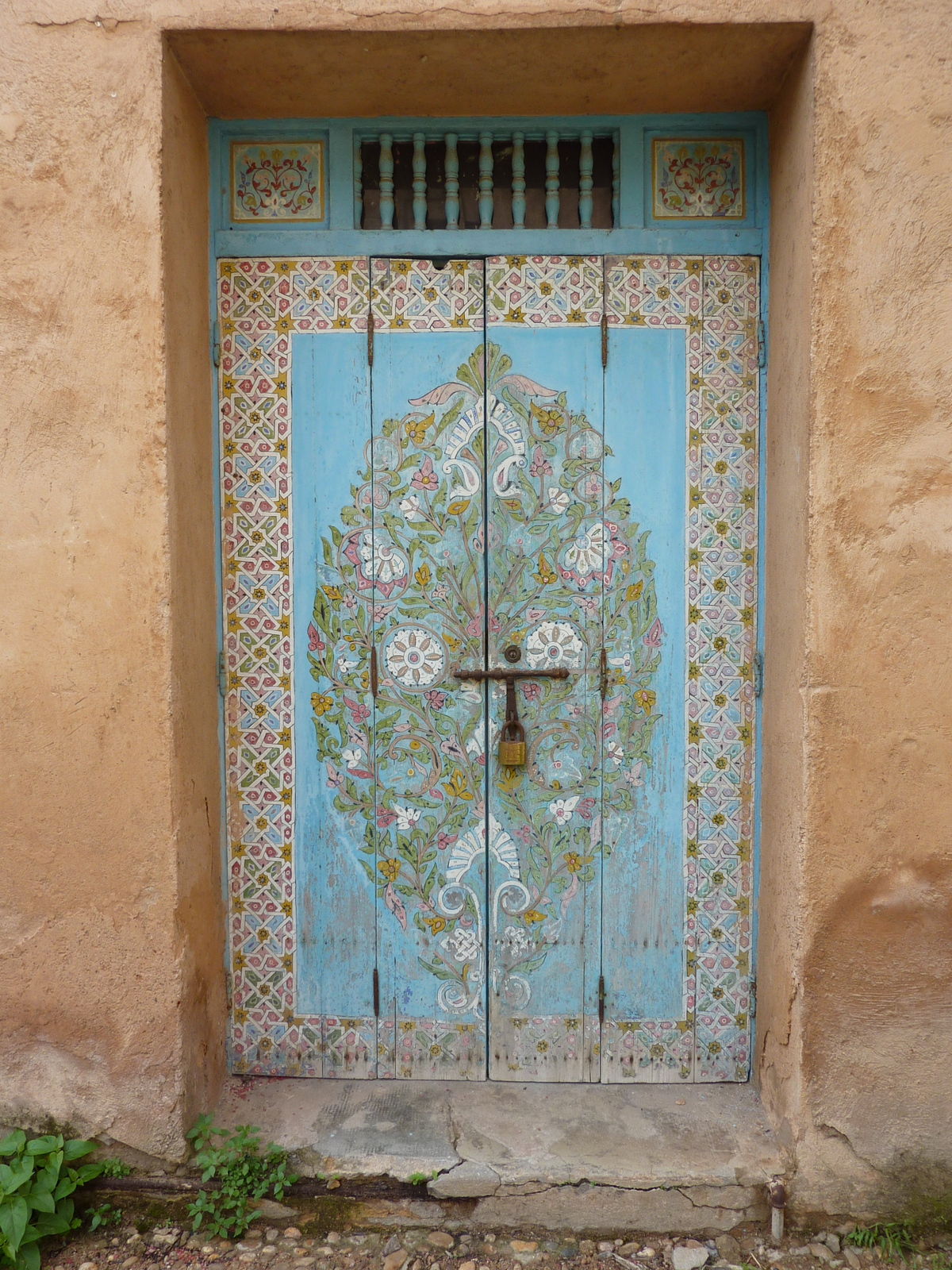 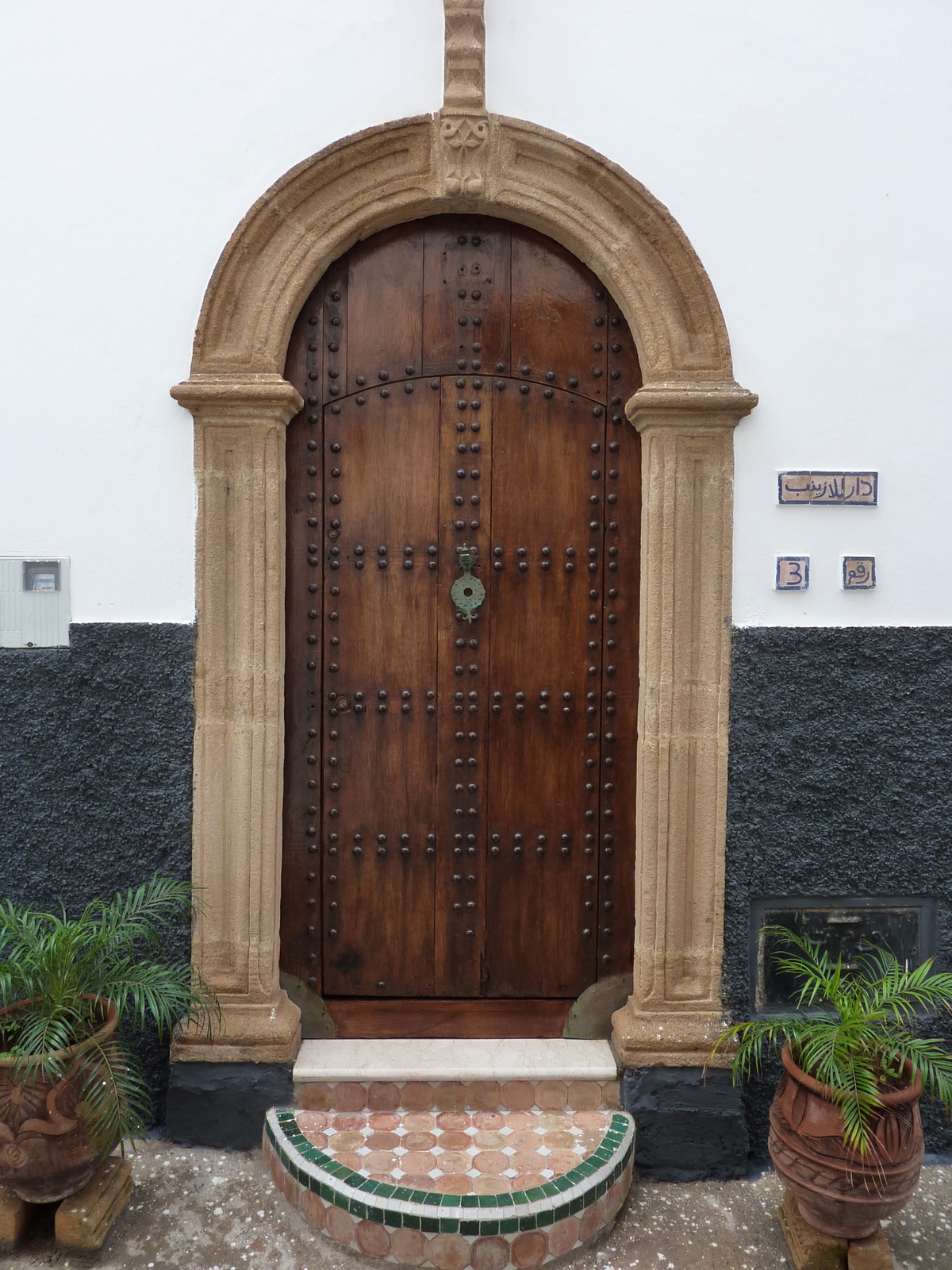 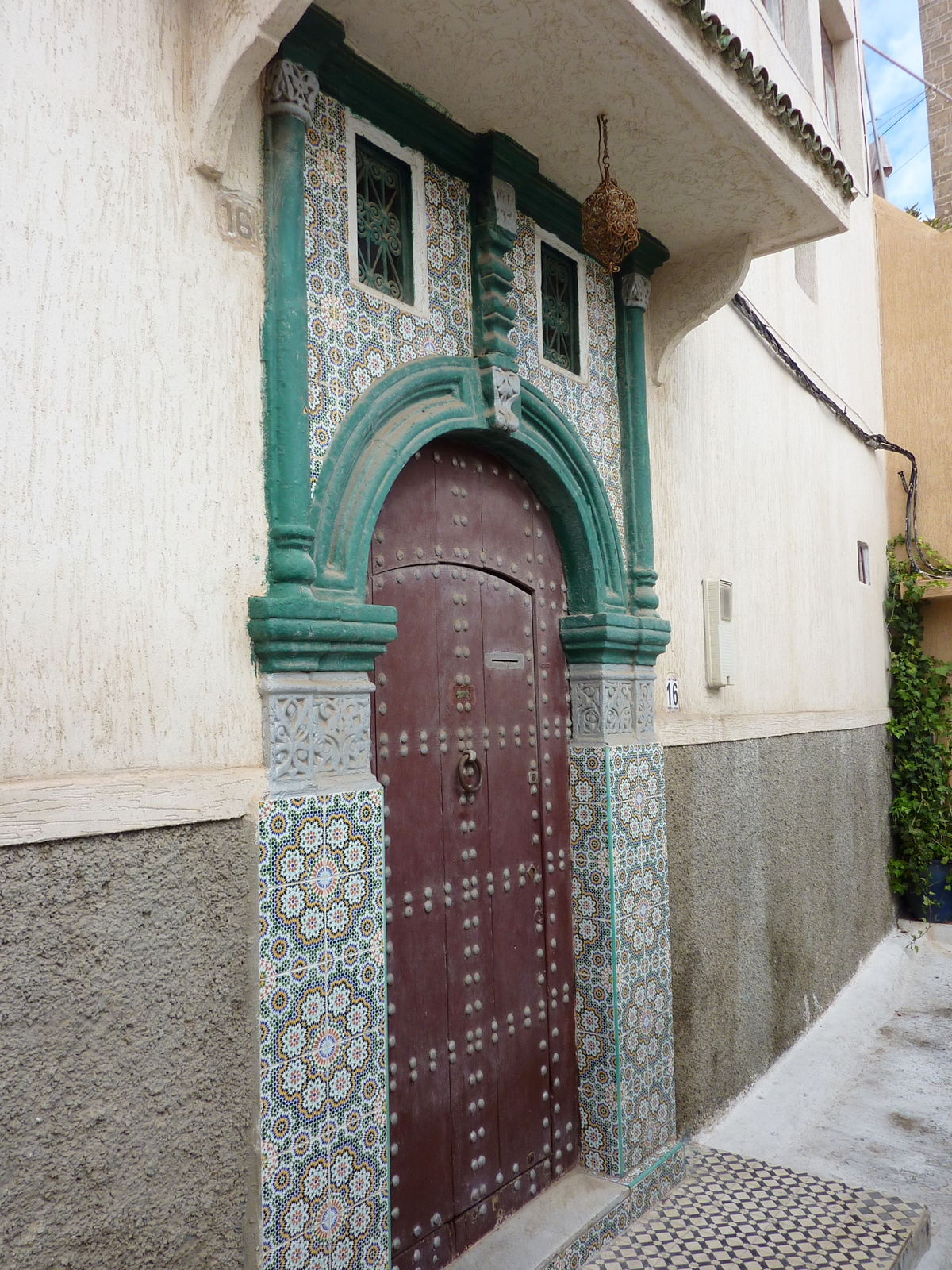 This entry was posted in All Cruising Logs, Atlantic Ocean Logs. Bookmark the permalink.