The South Coast of Sardinia

We’re presently weather bound, anchored on the south end of Isola San Pietro, a small resort island off the southwest corner of Sardinia.Mistral is the local term for the fresh northwesterly blows that spawn up in the Gulf of Leon and affect the central Mediterranean Sea.This one, packing winds of up to 40 knots is forecast to be around for the next few days. The Mistral and the resultant rough seas are not something one wants to intentionally sail into. We’re waiting for the weather to moderate before we sail to Mahon on the Island of Menorca in Spain’s Balearic Island group, about 200 miles West-Northwest of our present position.

We decided to spend of bit more time on the picturesque and less crowded south end of Sardinia as we make our way westward toward the Strait of Gibralter this season.Among other things we wanted to do one last stock-up on all the Italian goodies (cheese, wine, olives, seasonings, specialties, etc.) that we came to enjoy during our travels in Italy last season.

Our passage from Favignana in the Egadi Islands was a mixed bag.We were wide awake at 0230 hours due to the rolling caused by an easterly swell coming through the anchorage.We decided that since we weren’t going to get any sleep anyway, we might as well be covering some miles.We weighed anchor and set sail for Sardinia at 0300 in calm wind and seas and light fog, dodging some tuna nets marked with tiny white strobe lights.

A few hours after sunrise, a nice 10-15 knot northerly breeze filled in and we were able to set the jib, cut the engine and sail at a reasonable speed of 6-7 knots.We were visited later in the morning by a pod of small but playful dolphins that played in our bow wake, danced on their tails and did some spinning leaps. 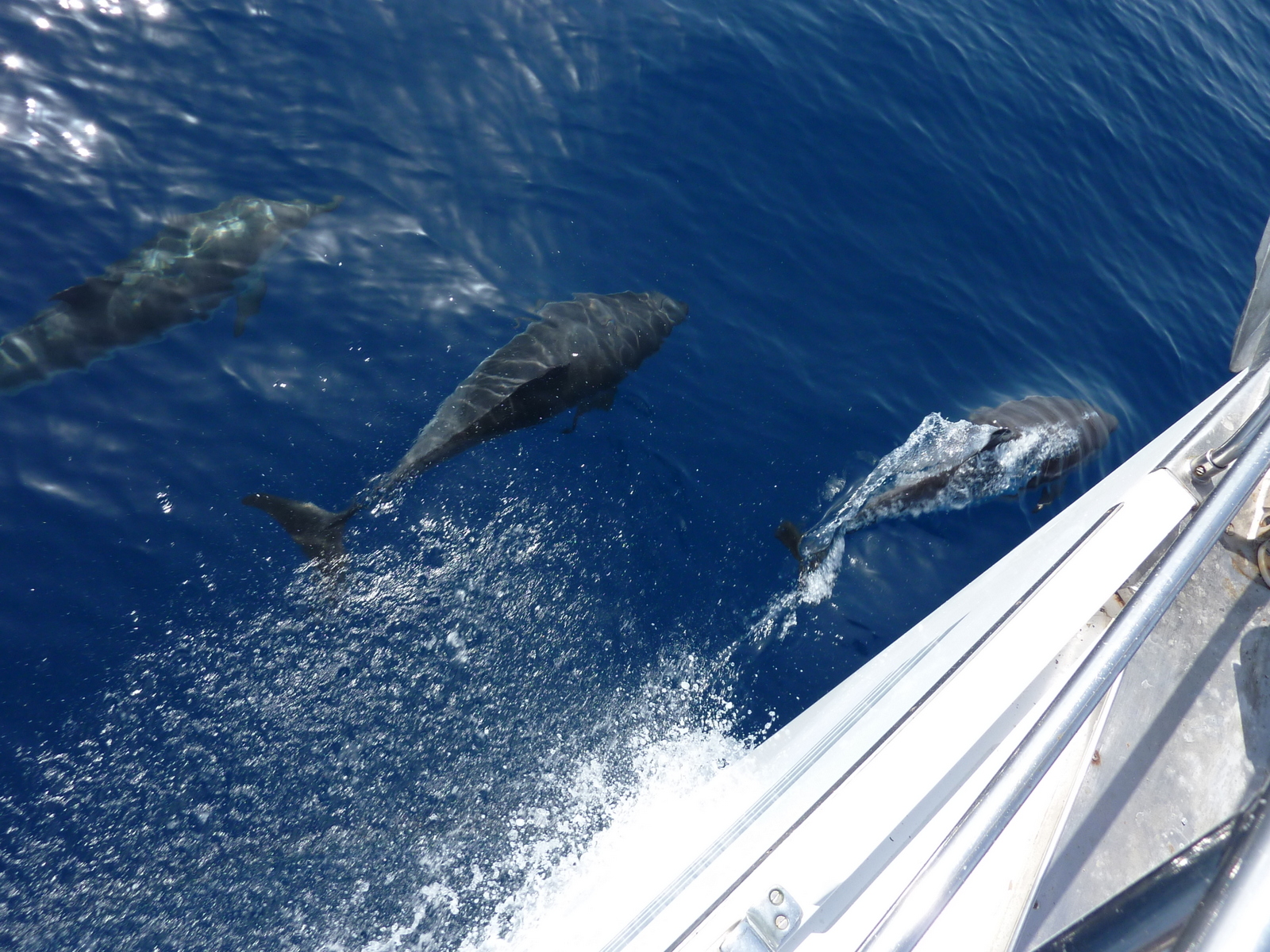 Mid-air shots like this are difficult to catch-good job Merima!

The breezed gradually died and by late afternoon we were motor-sailing once again.A few hours later, as we approached the south east corner of Sardini the breeze filled in again, but this time from the south west at 15 to 20 knots.The good news is that we could sail once again.The bad news is that this breeze would make our intended anchorage off the town of Villasimius on the west side of Capo Carbonara untenable.

Fortunately there was another option for us on the east side of Capo Carbonara, a shallow bay called Porto Giunco.We never like to make landfall in a strange place at night, but just after sunset, we could see a couple of megayachts and a few other cruising boats safely tucked in there.The approach was straight forward with the off-lying hazards lit and/or charted and we were safely anchored by about 2200 hours with good protection from the sea swell.

The southwesterly had moderated and hoping to anchor in the beautiful sand-bottom bay off Villasimius that we enjoyed last season, we took a jaunt around Capo Carbonara.The swell had persisted so we returned to the less crowded anchorage just south of Porto Giunco.The chart showed no off-lying hazards, but as we approached an open spot in the small bay, I could clearly see a shallow patch.We quickly headed up and anchored well clear of what appeared to be a rocky pinnacle just below the surface.

After a relaxing lunch we saw an Italian yacht heading into the anchorage, sun in their faces, on a collision course with the pinnacle.I whistled to get their attention and the skipper threw the helm over just in time to narrowly avoid contact.After they had anchored safely, we noticed the owner/skipper of the yacht swimming towards us, holding a bottle of wine out of the water.It was a generous gesture of appreciation which we did not expect, but I would not have wanted him to swim all the way back to his yacht holding that lovely bottle of wine out of the water.He thanked us and told us that the pinnacle did not show on his charts either.

Late that afternoon, we waved another yacht approaching in poor light away from an impending collision with the pinnacle to a safe spot in the anchorage.  They told us the pinnacle did not appear on their charts. Assuming that this thing had been whacked by many craft, I decided to go have a look the next morning.

A northeasterly started to blow, which would make anchorage on the east side of the cape uncomfortable, if not unsafe.Before we departed the anchorage, I had a morning swim over to the unmarked and uncharted pinnacle.Lurking a foot or so below the surface, I could actually stand on the top of it.Surprisingly, I did not find any evidence of contact let alone any remnants of anti-fouling paint from the numerous boats that we could only assume had discovered this pinnacle by surprise.We made a note of it on our electronic chart as well as numerous other uncharted rocks we could see lying just off the shore on the way down to Capo Carbonara. 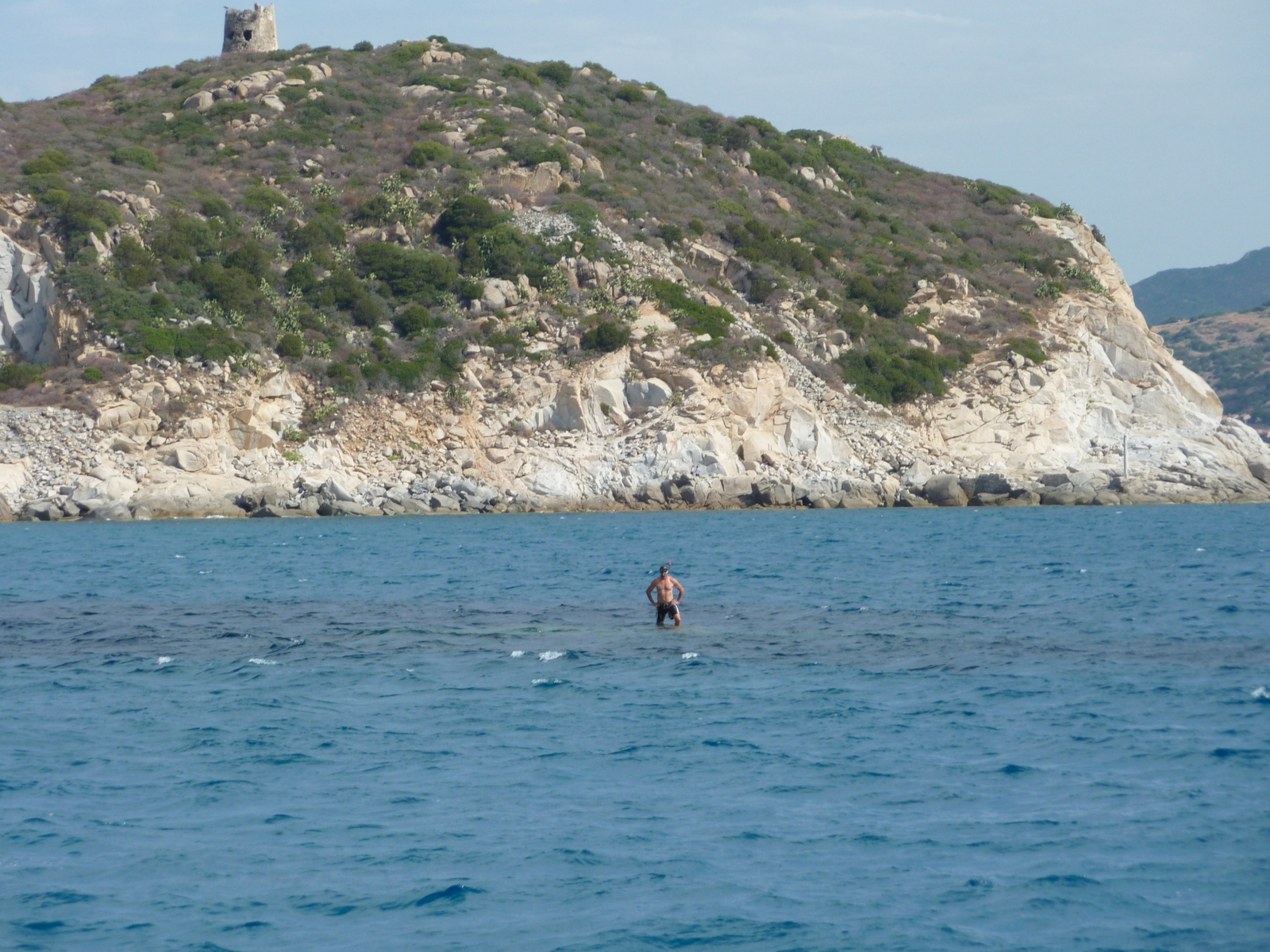 George stands on top of the uncharted pinnacle

Rounding Capo Carbonara, the wind immediately died and the seas were calm, but we headed west to the large open bay off the town of Poetto.We had planned to go into the marina in Cagliari the following morning so this put us within spitting distance to the entrance of the large port.

The next morning we tied up at Marina del Sole where we had stayed the previous year.Marina del Sole is a ragtag old marina that shows its deferred maintenance as much as many of the boats tied up there.It is a long walk into the center of Cagliari but reasonably close to a few restaurants, chandleries, a grocery store and the bus to town. 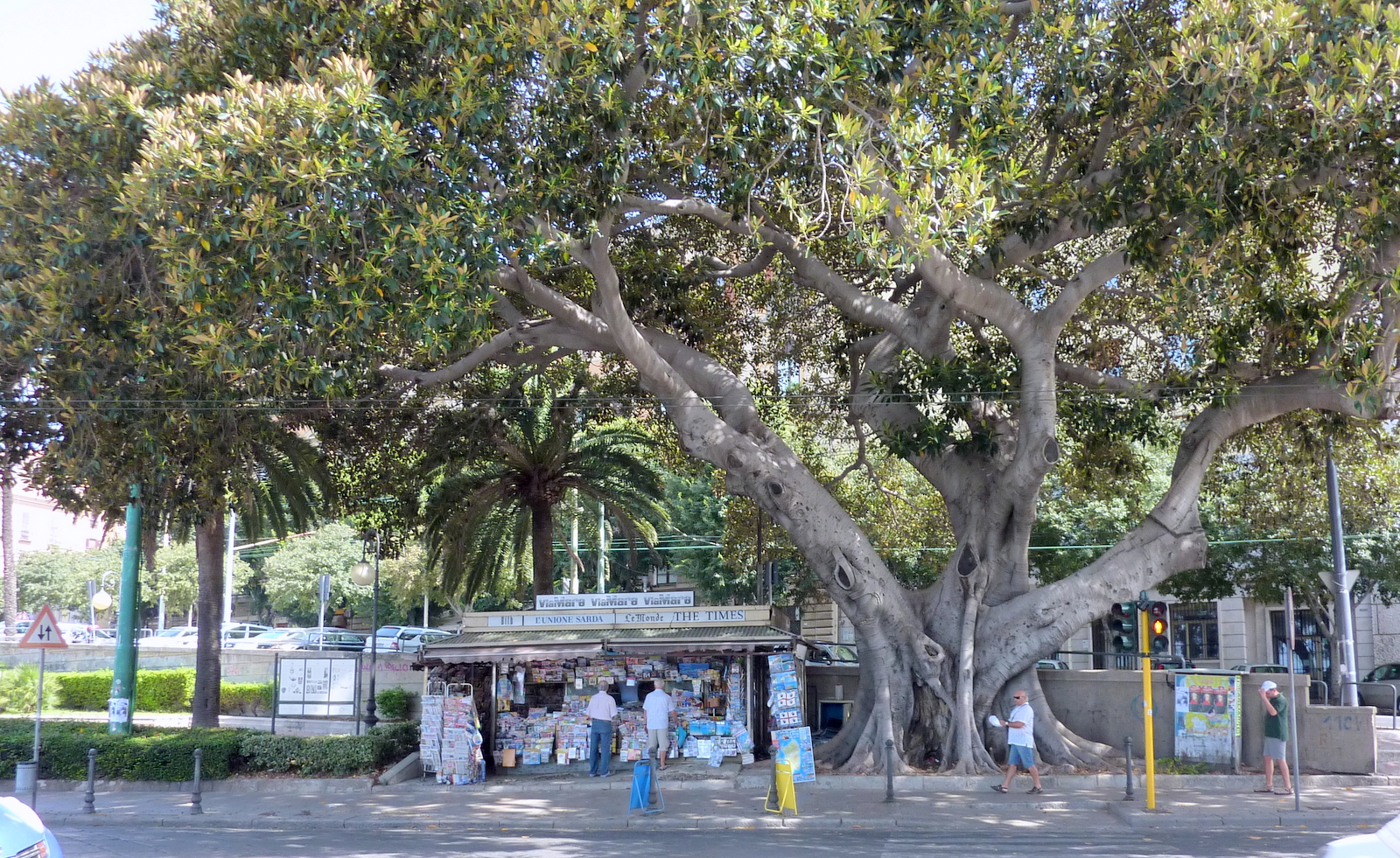 A news stand in the shade of a huge ficus tree, Cagliari Because of their comparatively low rates, Marina del Sole is favored by cruisers as a place to winter over.They also have a couple of old Fiats that they rent out by the hour and a barbecue social every other Saturday night.We enjoyed the barbeque (salt fish, chicken and pork skewers and Sardinian sausage) and meeting some other cruisers at the marquis set up on the main pontoon.We took advantage of the rental car to get to the Auchan supermarket on the other side of town to do a big provisioning.

After spending two hours at Auchan filling up two large shopping carts with provisions, our Visa cards were declined at the checkout.Merima went with one of the service ladies down to try to sort it out.After much conversation and phone calls to the local bank, they informed me the problem was at my end.I rang my bank in the States, thinking it was another “security hold.”Nope!Another few phone calls to the local bank and an hour later it was sorted.The last challenge was to load all the bags and boxes into carts at the marina and move them along the rickety docks to Moonshadow, which just happened to be the furthest yacht from the parking lot.Moving carts along a dock that is listing ten degrees and is criss-crossed with dock lines and shore power cords is a cruiser’s version of running the gauntlet, but by late afternoon we had everything safely on board and stowed away.

Stocked up, cleaned up and slightly hung over from the party, we headed back over to Poetto for what we had hoped would be a quiet night.For some reason, Sunday is a big night in Poetto and the discos along the beach were pumping out “doof-doof” music till almost sunrise.

With another fresh southwesterly in the forecast, we headed across the Gulf of Cagliari to a little bay behind the Capo de Pula. Protection was good in the picturesque little bay at Pula and we could see the ruins of the ancient city of Nora along the nearby shore.The breeze piped up to 20+ knots late in the afternoon so we enjoyed our happy hour watching arriving yachts with varying degrees of skill levels try to anchor in the thick weed bottom with varying degrees of success.The breeze calmed in the evening and we enjoyed the beautiful scene of a full moon rising from the sea near the flood-lit nuraghi perched on Capo di Pula.This nuraghi is one of about 7000 similar defense towers dating back nearly 4000 years, scattered around the Sardinian countryside. 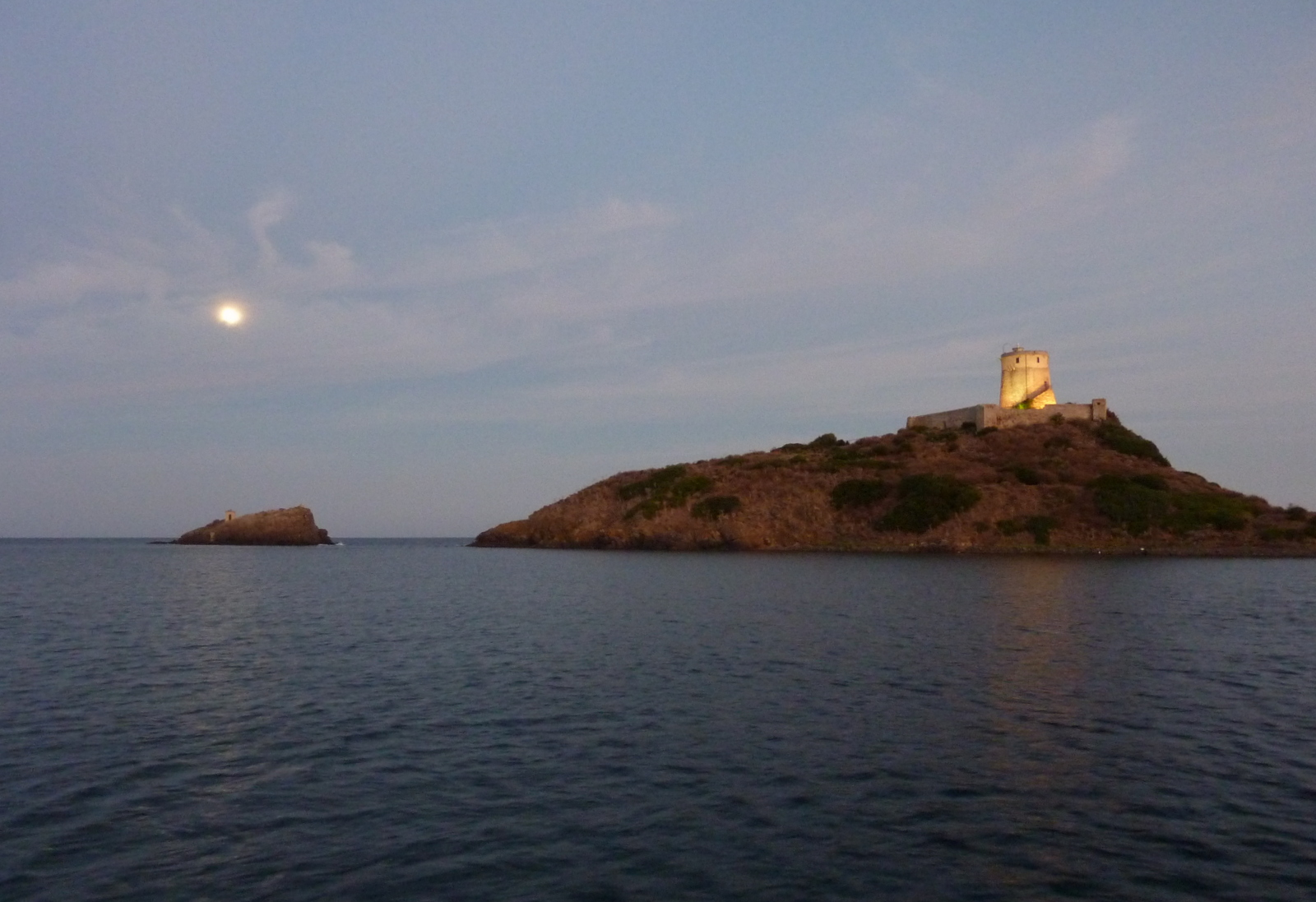 Moonrise and the nuraghi at Capo di Pula

After a couple days, we headed further south, returning to Porto Malfitano, the place where we had jumped off to sail to Tunisia the previous year. We had a pleasant few days there enjoying some swimming and snorkeling in the gin-clear waters.I even tried some spear fishing along the rocky shoreline.What was I thinking-there are no fish in the Med!

We headed west again to Porto Ponte Romano where we ran into our old cruising friends Kerstin and Hans from Cinderella.We spent the afternoon taking a walk around the nearby town of Sant’ Antioco and joined the Cinderellas for drinks and dinner in town that evening. 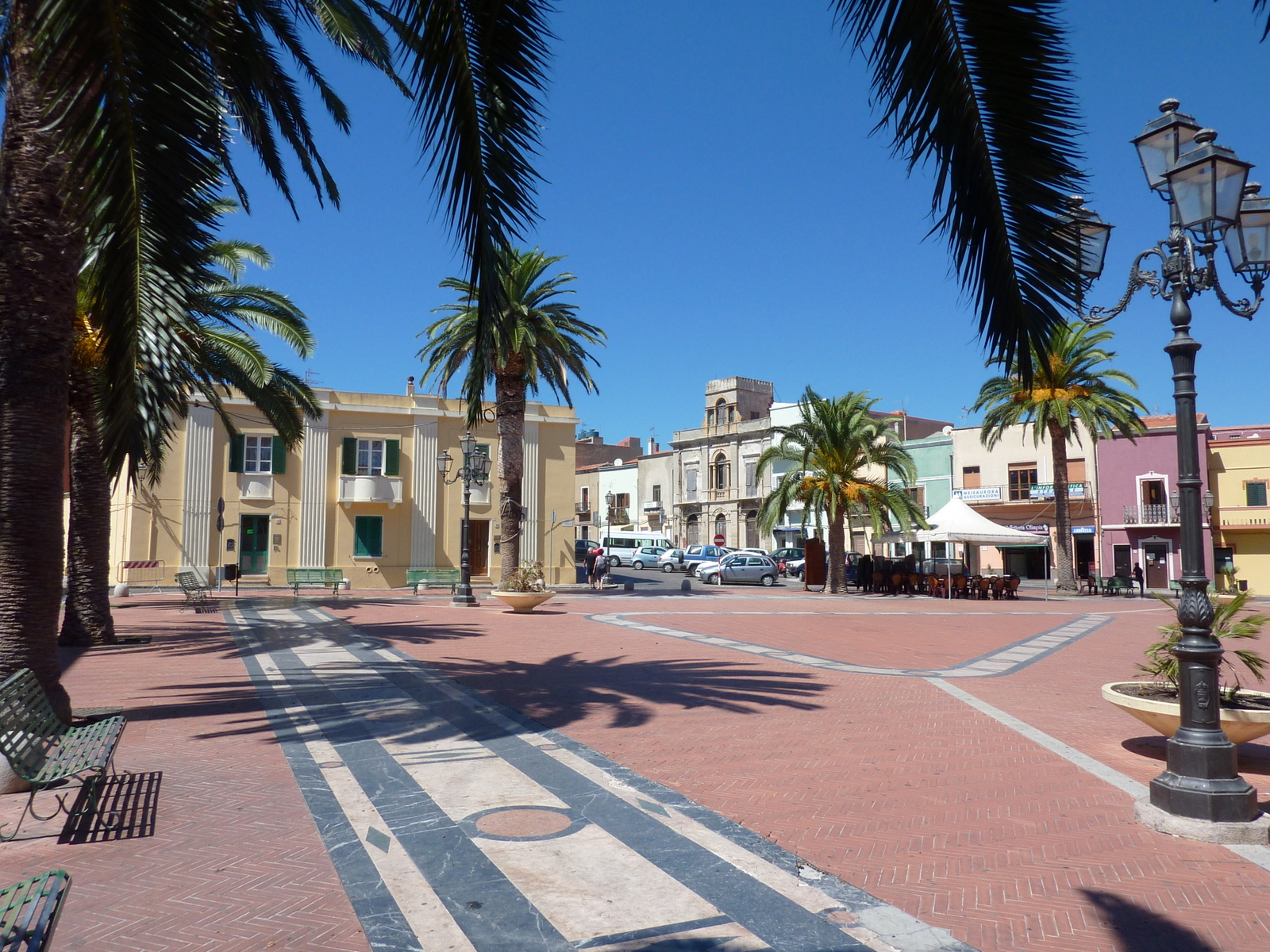 A piazza along the Corso, or main street in Sant’ Antioco The next day brought light breezes so we decided to motor around the island of Sant’ Antioco to the resort island of San Pietro.We anchored outside the breakwater off the main port town of Carloforte.Although Carloforte is a relatively modern town, it is quite attractive with its many pastel colored buildings.Most of the town was enjoying the typical afternoon siesta, so with the exception of the area near the ferry terminal, the town was very quiet.We did find one good supermarket that opened late in the afternoon, giving us the opportunity to pick up a few fresh provisions. 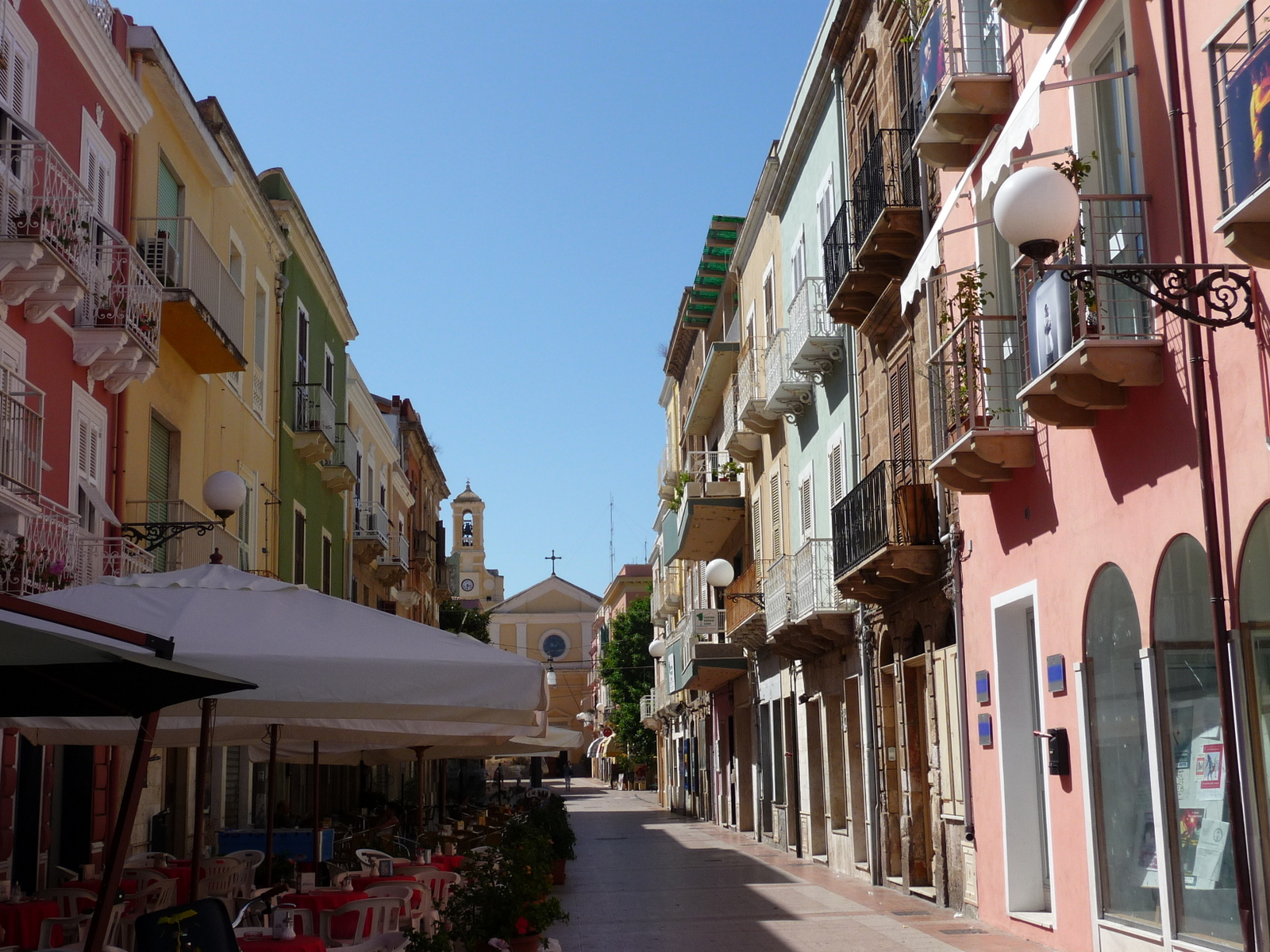 The streets of Carloforte are very quiet on a Friday afternoon. . . 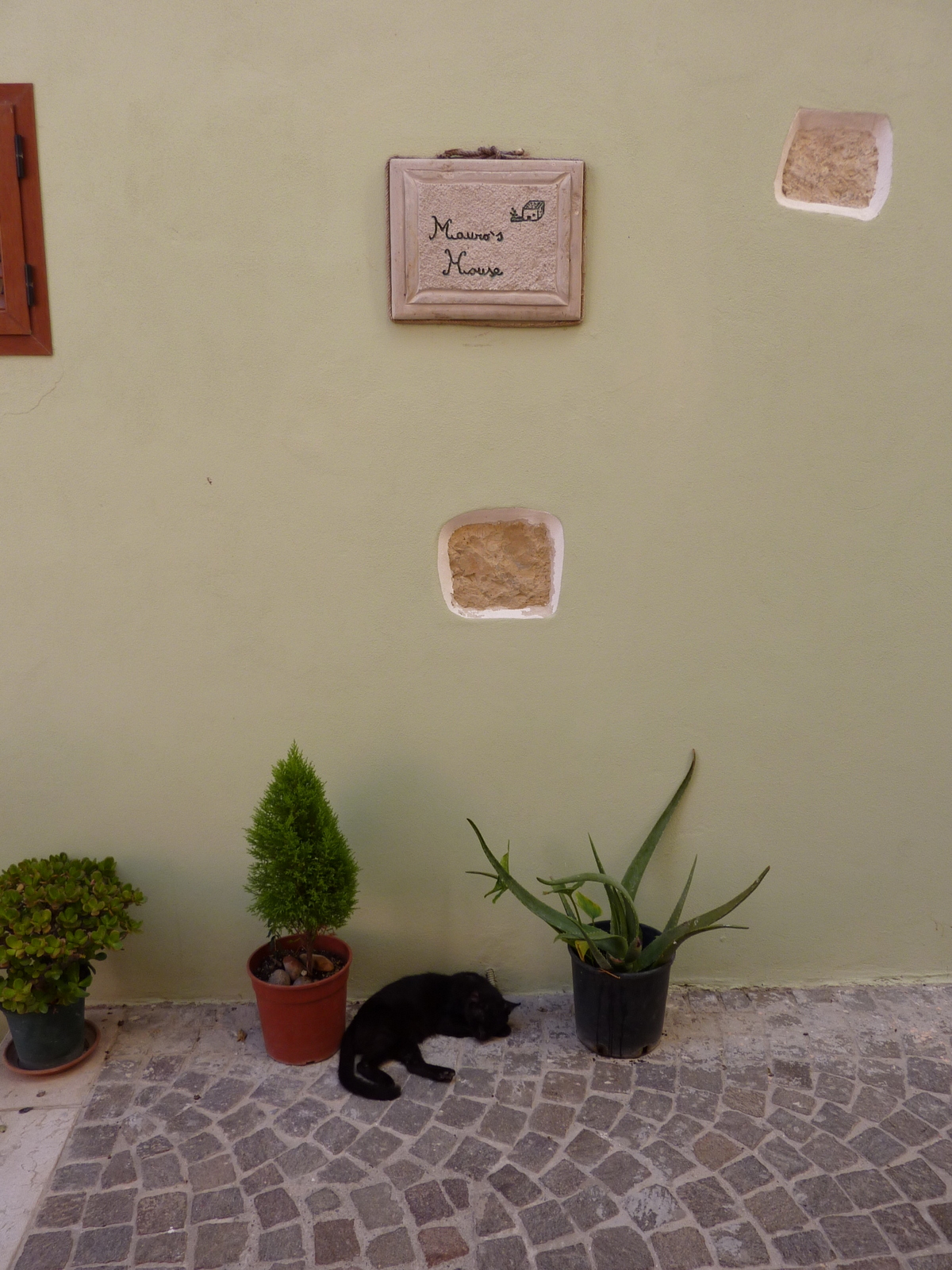 Everyone is taking a siesta Exploring the back streets (and stairs) of Carloforte

The grib (meteorological data) files we downloaded showed that a Mistral was heading our way.The next morning we headed south a few miles to the south end of the island where a couple of small bays would afford us with some better protection from the northwest and we could wait out the upcoming blow.