With the wind fresh from the northeast, conditions were perfect to sail across the channel from Menorca to Mallorca, the largest of Spain’s Balearic Islands.

Our Australian friends Annie and Liam on Gone With the Wind were heading across as well and we decided to have a bit of “friendly competition between nations.” We weighed anchors at 1000 hours and set sail for the east coast of Mallorca. 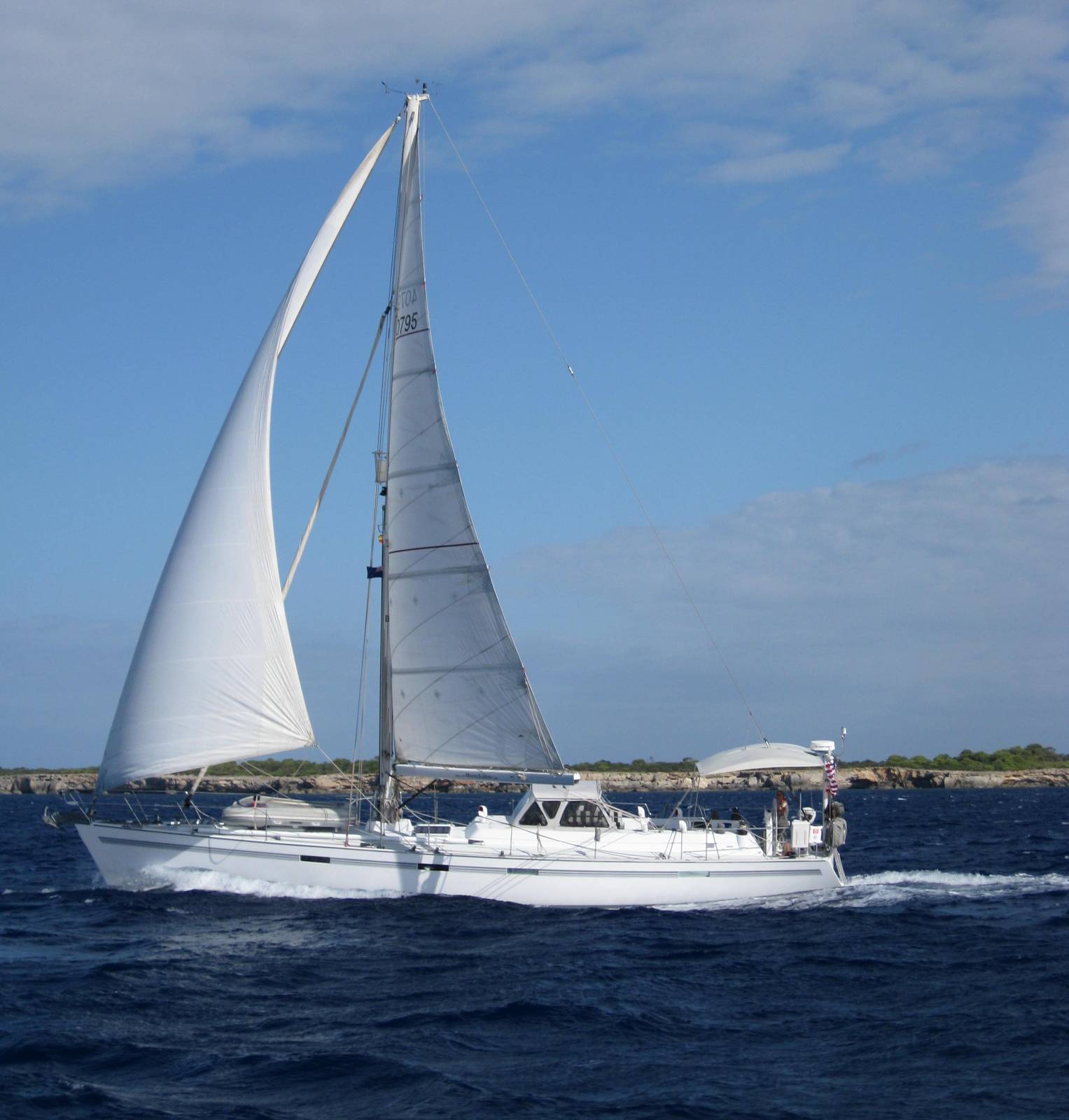 A race to the next island

Moonshadow got away quickly and took an early lead, blast reaching at 10-12 knots. We were feeling pretty smug until Gone With the Wind got powered up and began surging forward in the following seas, streaking by us at 13 knots. We were no match for the light catamaran in those conditions and within a couple of hours GWTW had done a horizon job on us.

We were visited by a large pod of big dolphins along the way, who dropped by to wish Merima a happy birthday and entertain us with their antics. They hung around us for about a half an hour, surfing in the following seas off our starboard beam. As we approached Mallorca, the breeze slowly faded and we ended up motor sailing the last hour or so in very rolly seas. We anchored in the northern corner of Bahia de Alcudia and had good protection from the refracted swell behind the breakwater of Porto de Alcudia. Annie and Liam came around for dinner that evening to help Merima celebrate her birthday and we all had a delightful evening.

We spent a couple days in Alcudia waiting for the swell from the northerly blow to moderate. The town of Alcudia is pleasant enough and mainly catering to European tourists looking for a beach holiday. The waterfront is chock full of tourist shops, mini markets, pubs and casual restaurants and cafes.

When the seas had eased a bit, we headed around to the south side of Mallorca. The coastline is very rugged and like Menorca, indented with many small calas (bays). With a bit of residual swell remaining, we found good shelter in Porto Colom, a small fishing village that is slowly giving way to tourism. Along the shoreline near the entrance are a number of exquisite holiday homes. We took anchorage just inside the entrance amidst a lovely neighborhood. The town of Porto Colom itself was rather uninspiring but did have a couple of good markets for provisioning.

The following day we carried on westward along the coast a few miles to Porto Petro. Most of the protected space inside the port was laid with moorings, but we were told by some yachties swinging on one of the moorings that the white mooring balls were free for the first day. In order to accommodate the increasing number of visiting yachts, the Balearic Islands government is (wisely) installing moorings in popular anchorages which can be used free for a day or two and can be reserved by visiting their web site. We picked one up in a quiet corner of the bay off a row of spectacular holiday villas. 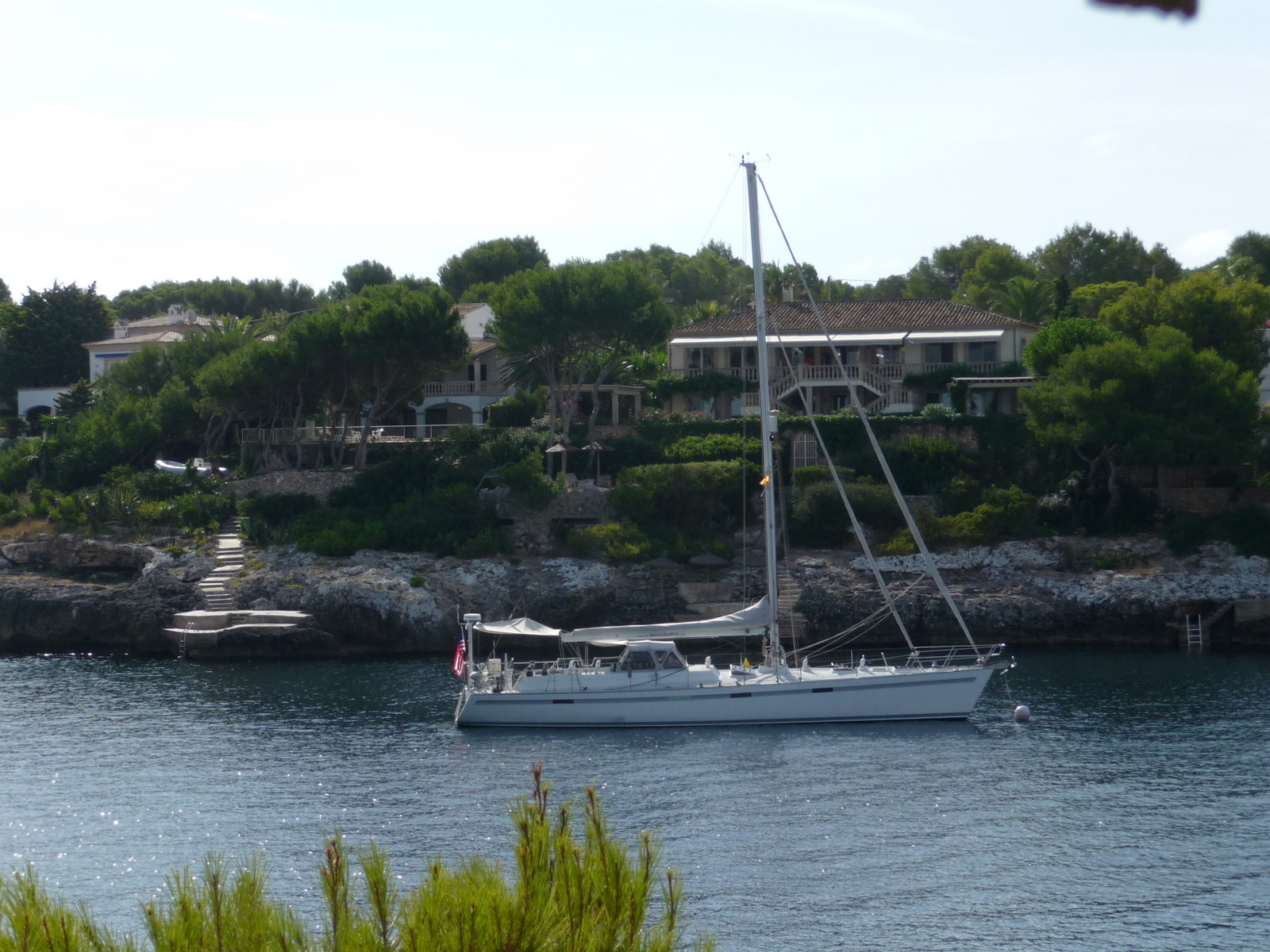 Moored in the cozy Porto Petro

We were visited by the mooring attendant soon after we arrived. Despite the fact that the mooring was clearly marked “15 metres (boat size max), 16 nudos (knots of wind max)” he wasn’t fussed and filled out the form to book us in for the night.

A yachtie we met in Mahon had given us a tip on a restaurant in Porto Petro. Annie and Liam joined us in town that night for sundowners at a chill-out bar on the waterfront followed by dinner at La Caracola. The food and service was as advertised, excellent and very reasonably priced. We all returned for a second round over the next couple of days.

We had applied in Porto Petro to get a permit to visit the Isla Cabrera Nature Reserve, off the south coast of Mallorca. Due to some bureaucratic bumbling we had to extend our stay in Porto Petro for a couple days. The mooring managers were very gracious and understanding and since the yachting season was nearly finished we were allowed to stay with no hassles or charges. In the end, the permits failed to come through so we decided to head to Palma de Mallorca.

In light winds we motor-sailed to the west side of Mallorca into the large Bahia de Palma. A large swell was working straight into the bay, so we found a reasonably calm anchorage off a long beach behind a headland at Playa Palma Nova.

By the following afternoon the swell had moderated so we were able to shift to an anchorage just off the city of Palma outside the port’s breakwater. We were chased away shortly after by a port Pilot. We’re not exactly sure why as we were hundreds of meters from the entry channel and the water in which we were anchored was too shallow for ships. We complied and moved about a half mile westward down the bay and re-anchored.

We took the dinghy into the marina and spent most of the next day exploring Palma and visiting a few chandleries and a grocery store.

Palma is a surprisingly cosmopolitan city with grand, tree-lined boulevards as well as quaint single-lane back streets. There are many stunning examples of Spanish architecture from various periods, but by far the most outstanding is the massive Gothic cathedral that stands on a hill close to the waterfront. Its flying buttresses and spectacular façade are very impressive, particularly when illuminated at night.

Palma is one of the largest yachting centers in the western Med. A dozen marinas are home for thousands of boats. There are repair and haul out facilities for every shape and size of pleasure yacht. In just one corner of the harbor, we found a half a dozen well-stocked chandleries, which of course did not have the particular items we were in search of. It is worth noting that the largest chandlery in Palma has free beer on tap for customers, so you can take your time and make sure you don’t forget anything.

After a full day of exploring Palma, we returned to find Moonshadow pitching to a large swell. We upped anchor and headed back to the calmness of Palmanova.

The next morning we caught a bus into Palma and made our way to the railway station where we caught the narrow-gauge train to Sóller. 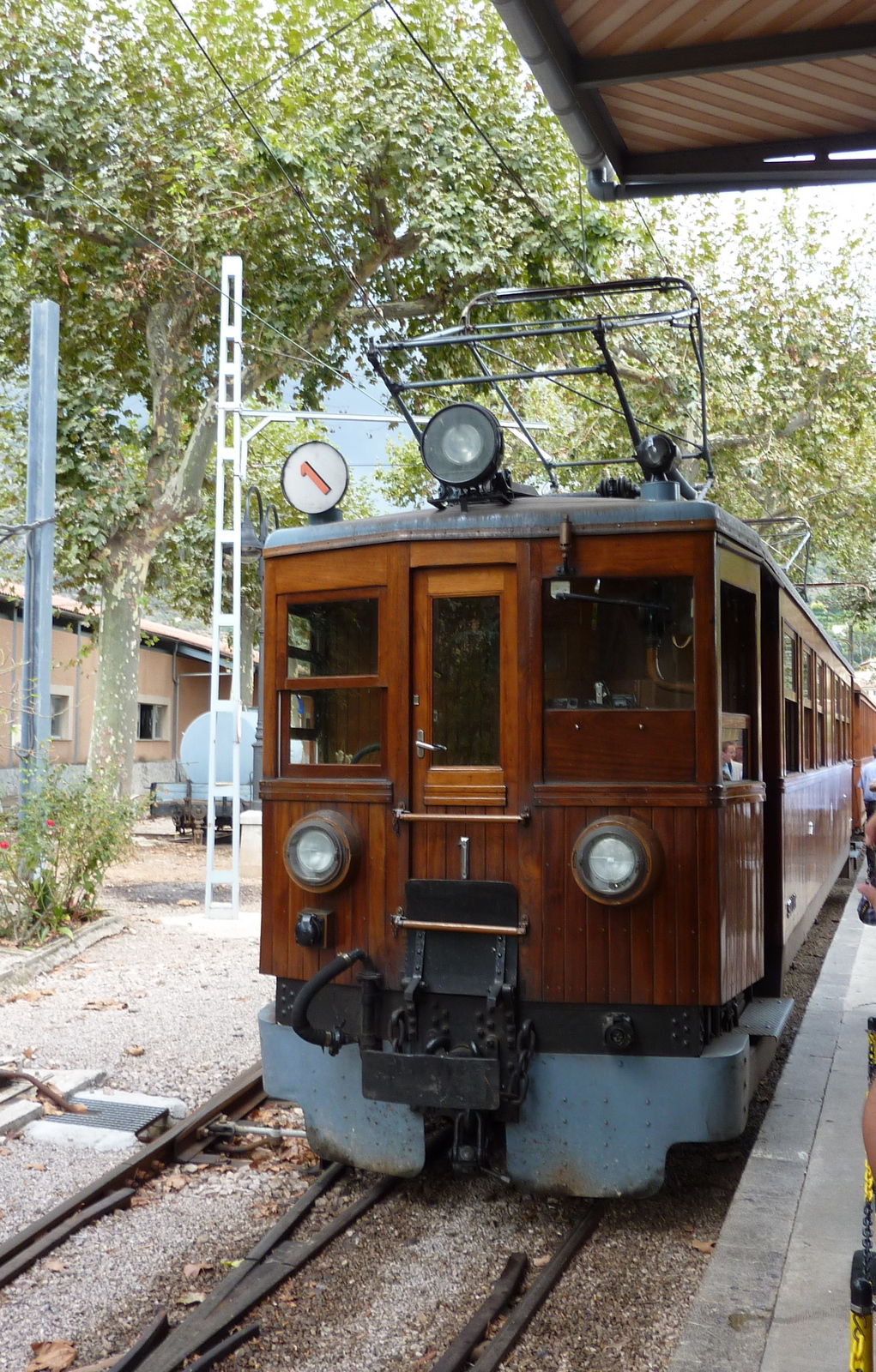 The train from Palma to Sóller

Early 20th century electric train’s passenger cars are paneled in varnished timber and appear to have all the original fittings. The 17 mile trip through gorgeous valleys and mountain tunnels takes more than an hour and with hard seats and uneven tracks is a reminder of what rail travel must have been like a century ago. The final descent into the valley town of Sóller makes for a spectacular finish to the trip and the terminus is just a block from the town square. 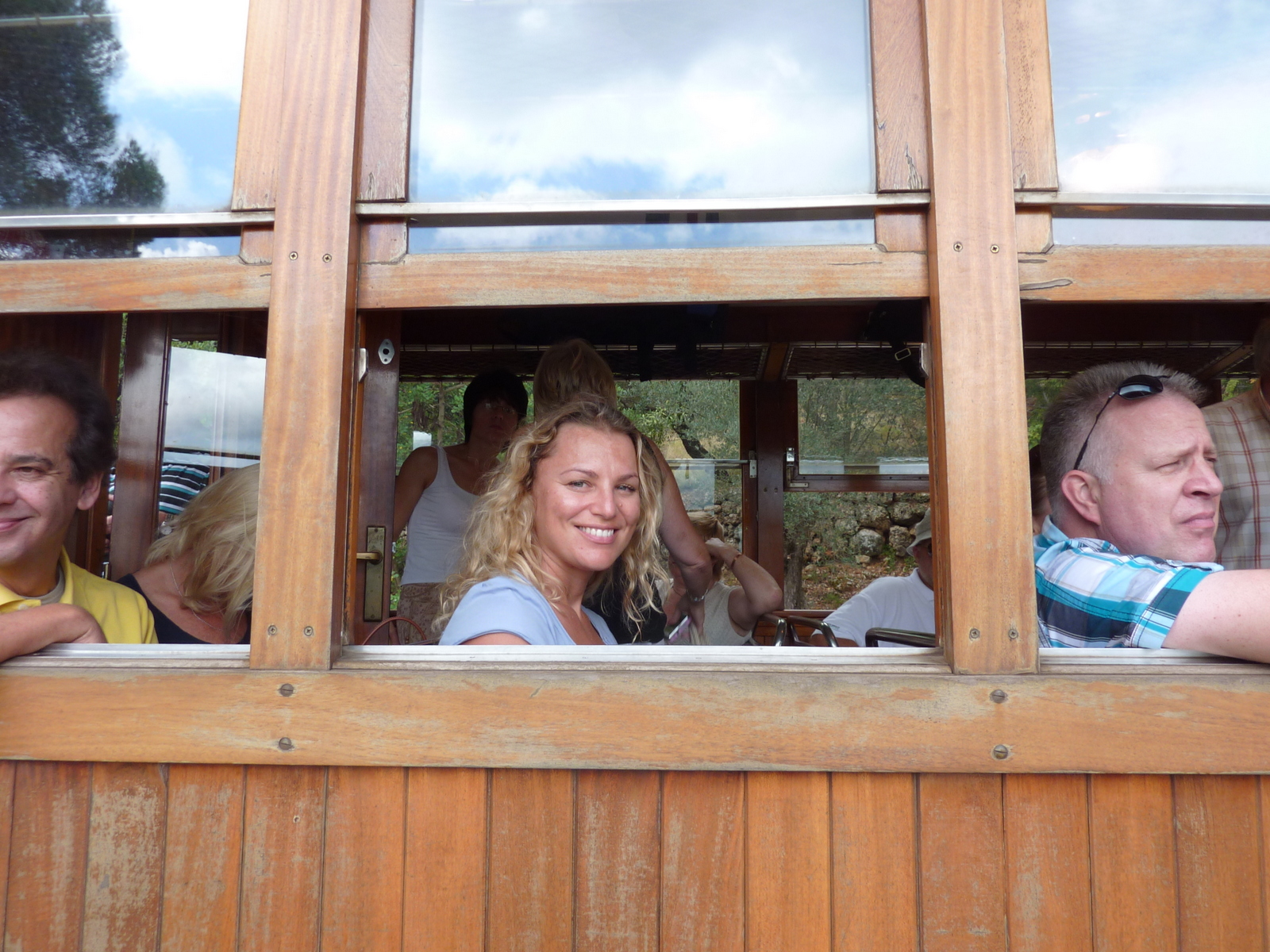 Air condition on, ready to roll. The center of old Sóller town is a delightful pedestrian only area with beautiful old country-Spanish style buildings. We enjoyed lunch outdoors in the back yard of an old home converted to a café.

By the time we had finished lunch, the shops had closed for siesta, so we caught the tram down to Port Sóller, which is situated a couple of miles down the valley on the sea. Port Sóller is a lovely natural harbor surrounded by steep pine covered hills. The tram runs right down along the beach and finishes right at the pier which was once the center of the old fishing village. Tall but narrow buildings line the old part of the waterfront and reminded us a bit of Portofino. Nowadays much of the town has been overtaken by tourism and consists mainly of bars, cafes and small hotels. 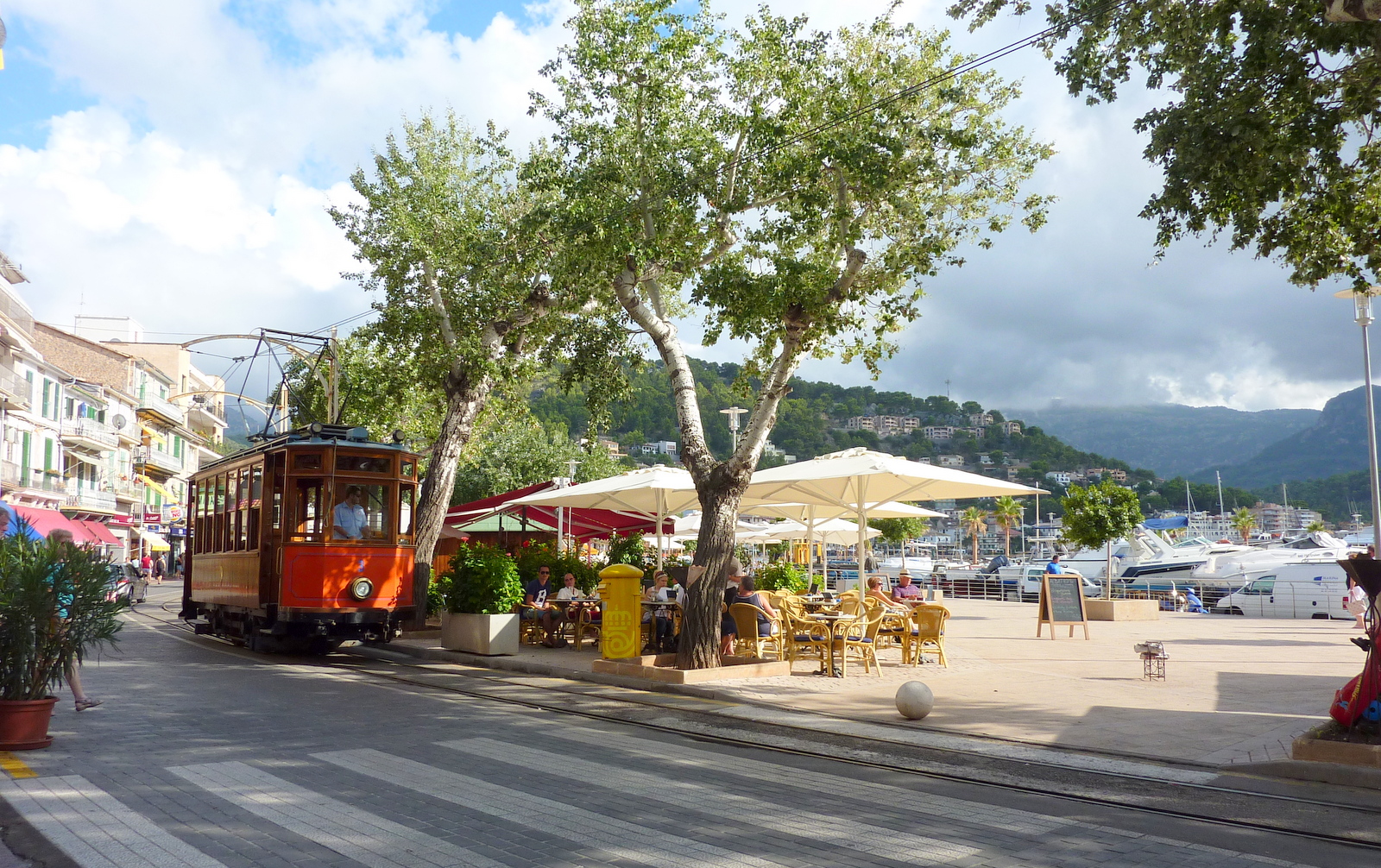 The waterfront tram in Sólla

After a stroll on the waterfront and a relaxing glass of wine at a café, we found the bus that would take us back to Palma. We opted for the “scenic route” which carried on along the coast away before heading over the mountains to Palma. This bit of coastline on the northwest side of Mallorca was some of the most spectacular that we had seen in the Balearic Islands. We passed through numerous gorgeous villages situated on steep hillsides overlooking the sea. Most had long since transformed from agriculture and had become enclaves of stunning holiday homes and upscale boutique hideaway hotels. 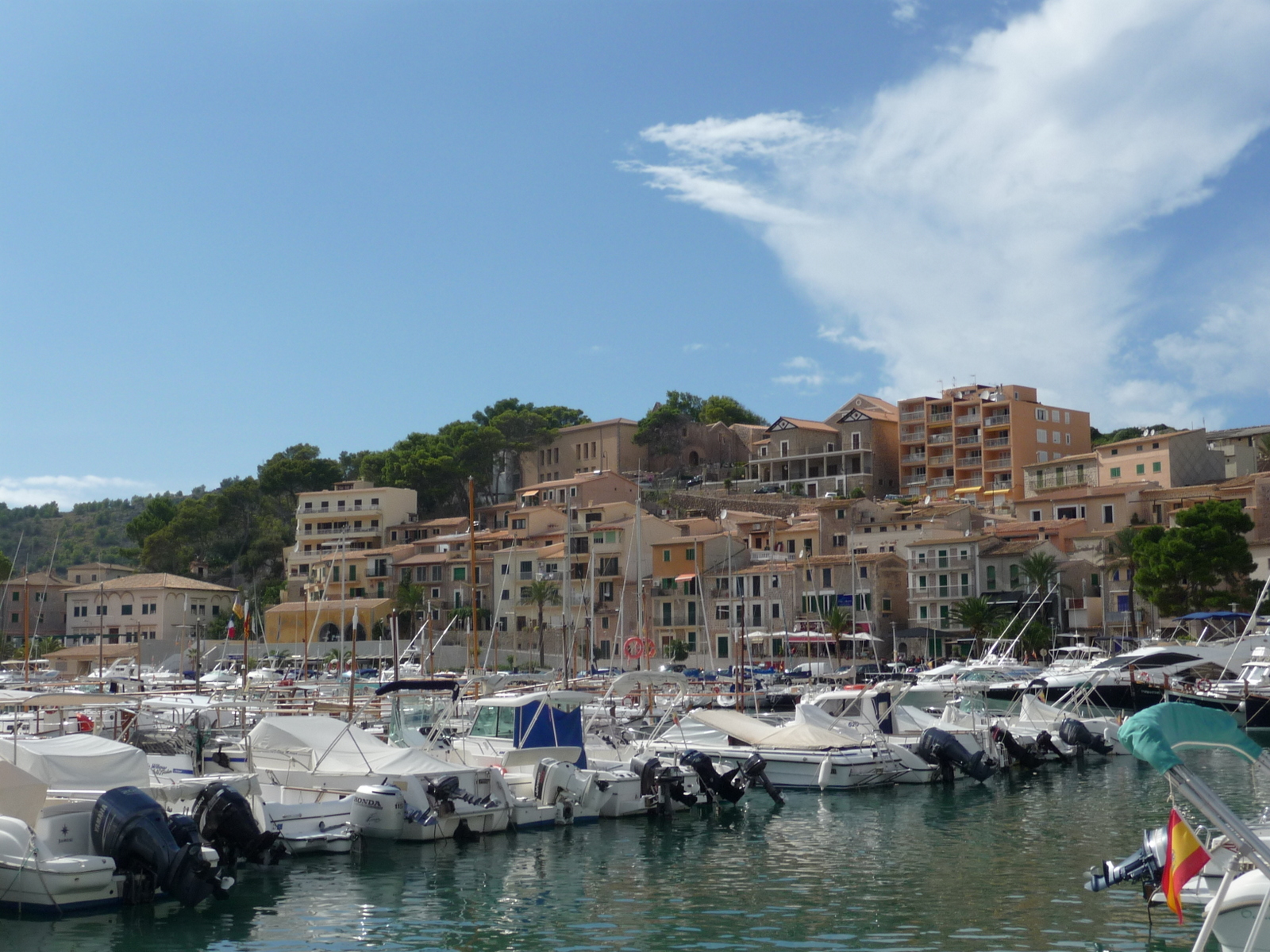 The bus dropped us in Palma’s downtown underground station just a few steps from the bus that would take us back to Moonshadow in Palmanova where we kicked up our heels after a long but excellent day of inland travel.

A couple days later, a southwesterly was forecast. We picked up the anchor at 0700 and with a spectacular red sunrise, set sail for the island of Ibiza.