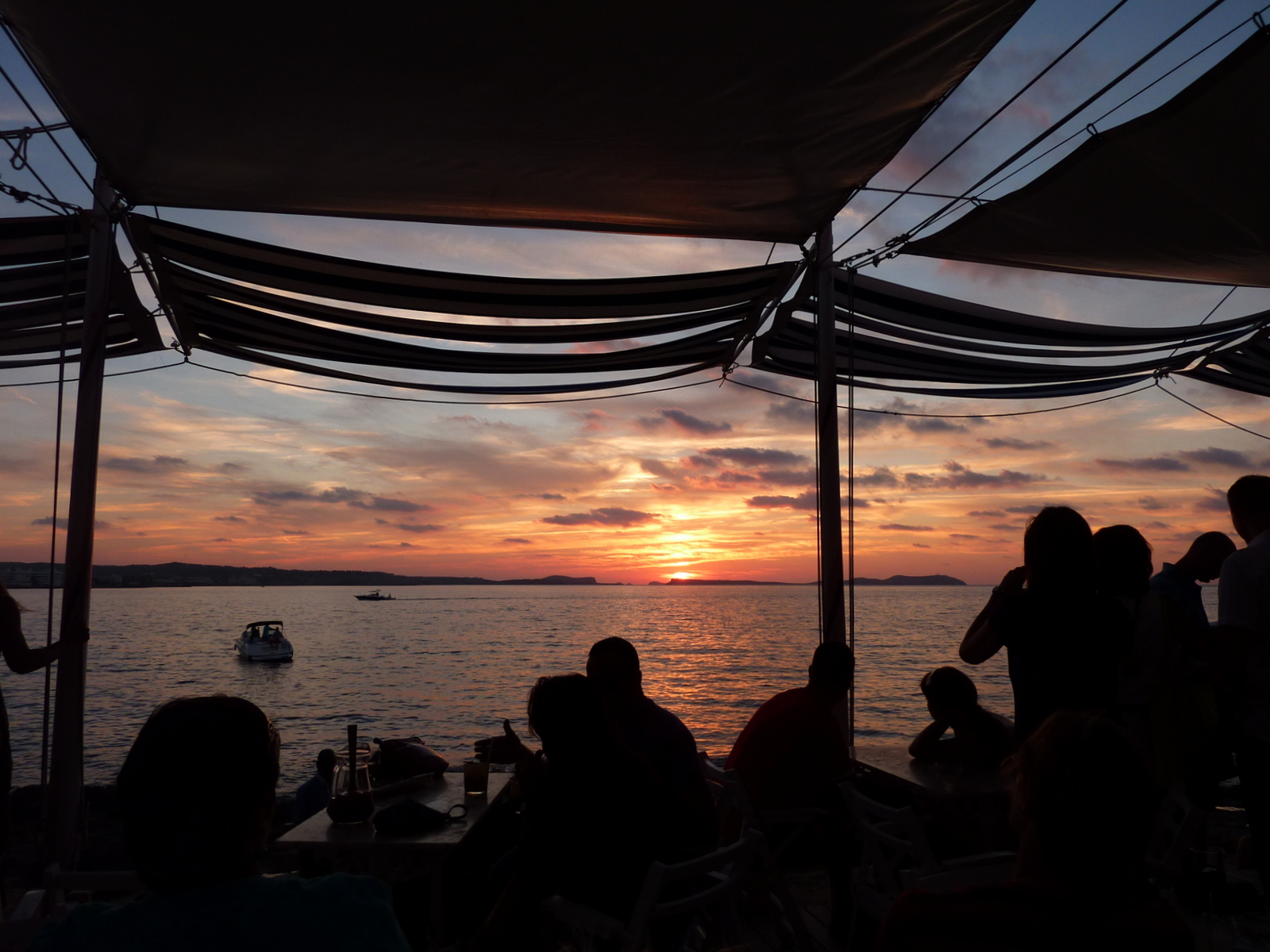 Sunset at the Cafe del Mar

We departed the anchorage at Playa Palmanova on the island of Mallorca under a spectacular crimson sunrise.  No need for these sailors to take warning-conditions were perfect for a day of sailing.  The breeze filled in shortly after we got under way and we had an excellent 52 mile passage to Cala San Vincente on the island of Ibiza. 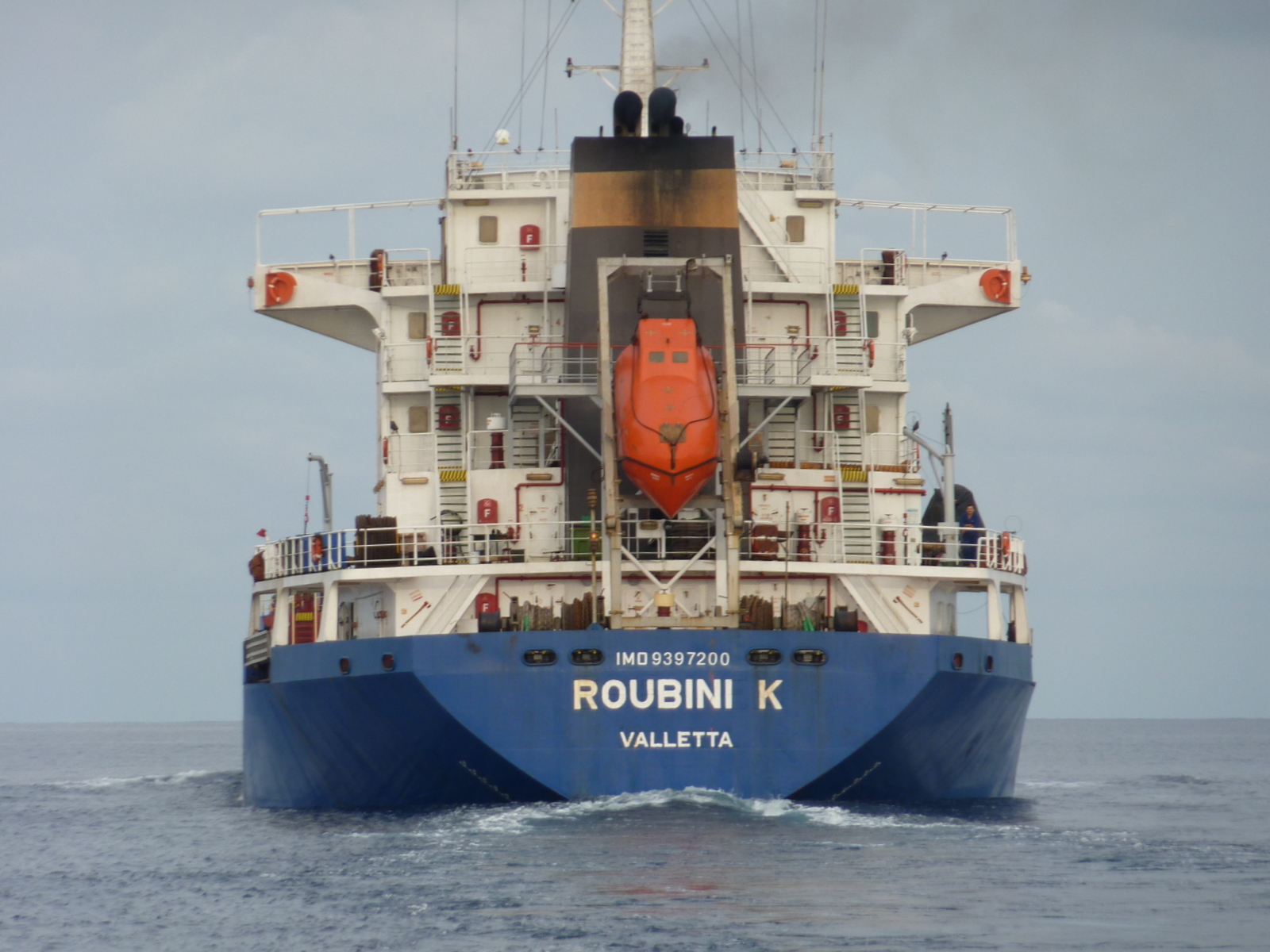 This ship moved along nicely, but it’s life boat looked like a real dog

In spite of being skunked for our four summers in the Med, we continue to put out the fishing line on our passages hoping to snag something. As we approached the anchorage, I dutifully began to reel in the lure and call it another wasted effort.  There was a bit more resistance than usual and I thought I had once again hooked a plastic bag.  As the lure drew near the transom, I could see that it was actually a small fish.  So small, that it had not even been able to override the drag to let us know we had a fish on.  But nonetheless, a fish.  Poor little thing was dead by the time we got it aboard so we had no choice but to clean it and have it for dinner. The little mackerel tuna was of the size that we would categorize as “bait” but it cooked up into a nice meal for the two of us 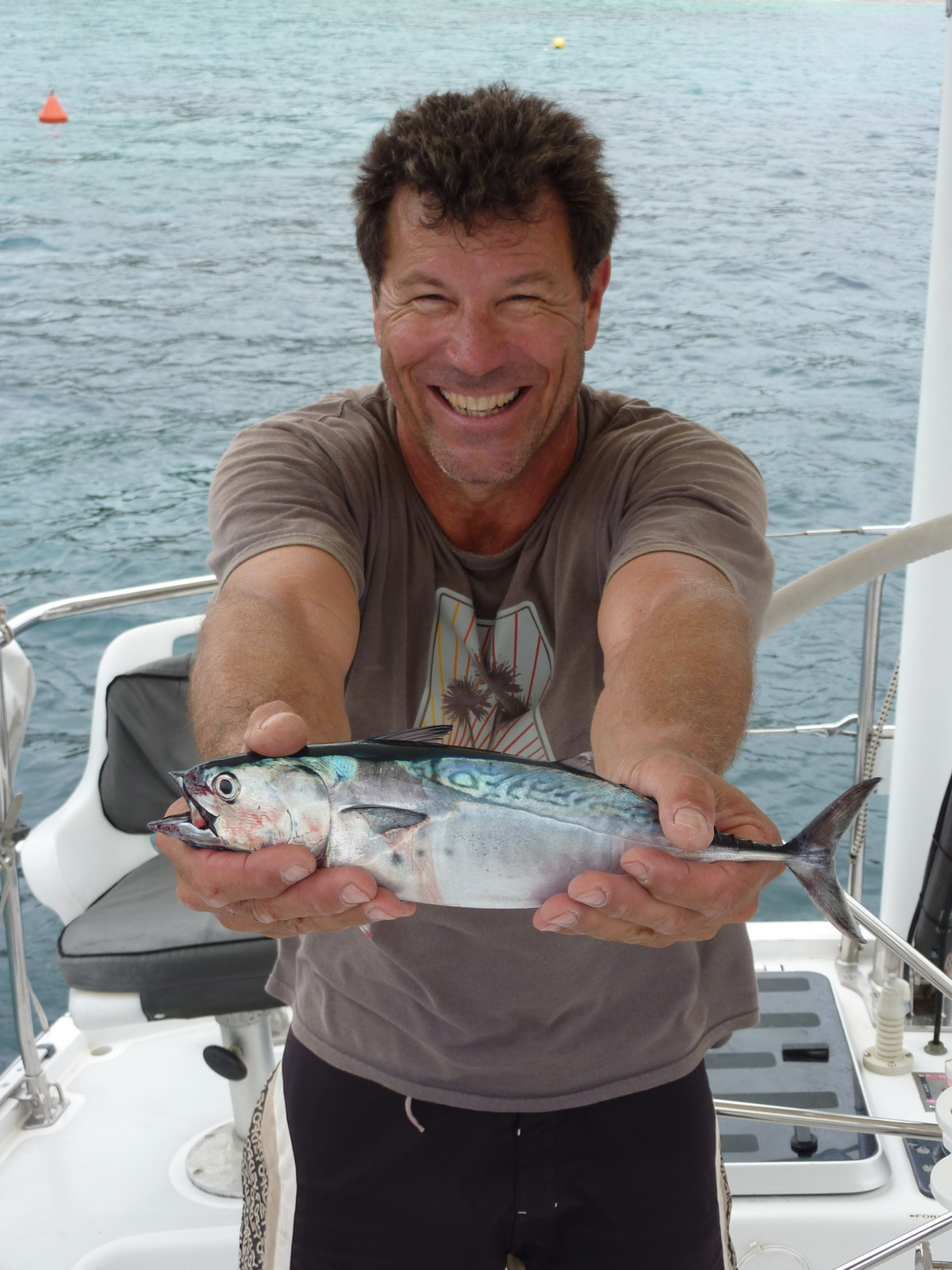 “Hold the fish out towards the camera” said Merima, “It’ll look bigger” 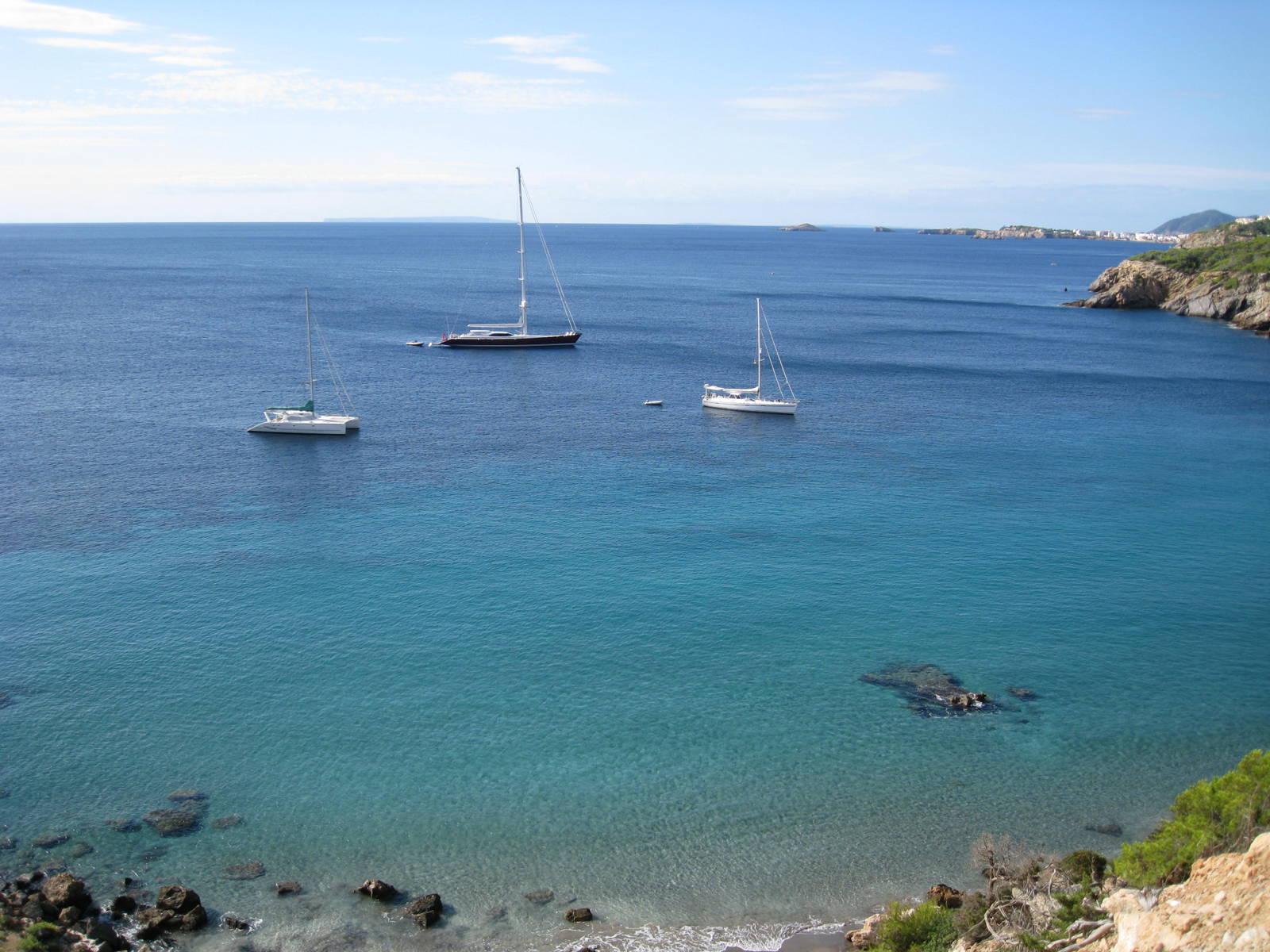 We hopped around to the south side of the island the next day to a more comfortable and attractive anchorage in Cala de Boix, spending just a night there before working our way to Ibiza town where we anchored in a large bay adjacent to the harbor called Cala Talamanca.

People come to Ibiza from all over the world to party all night in mega discos pumping out house music to thousands of dancing clubbers.  We were happy to just spend a morning exploring the old walled town of D’ Alt Villa and browsing in the eccentric boutiques along the narrow streets of Sa Penya before having a relaxing lunch on the waterfront and watching the endless parade of interesting people. Homes in the shadow of the Cathedral, Ibiza town

Later in the afternoon we returned to Moonshadow and headed 9 miles southwest to the small private island of Espalmador.  The low lying rocky islands of Espalmador and Formentera extend south from Ibiza and have some of the most beautiful white sand beaches in the Balearic Islands.  We met up with Annie and Liam on Gone With the Wind for sundowners on one of those beaches that evening. We headed out the next morning up along the rugged and spectacular west coast of Ibiza.   We anchored on the northwest side of the island in a large natural bay at Port San Antoni de Portmany.  Like Ibiza town, “San An” is mostly about the night life for overseas holiday makers.  What was once a quiet fishing village has become a maze of “bar streets” that pump from dusk till dawn every day throughout the summer months.

On the west side of town is the world-famous waterfront bar called Café del Mar.   In the high season, thousands of people come here to relax, sip sangria, listen to excellent chill out music and watch the spectacular sunsets.  This is exactly what we did.  We came back again the following evening with Annie and Liam and the sunset was even more spectacular.  Of the thousands of places we’ve been to watch the sunset over the years, Café del Mar definitely rates in the top two or three coolest of them all. 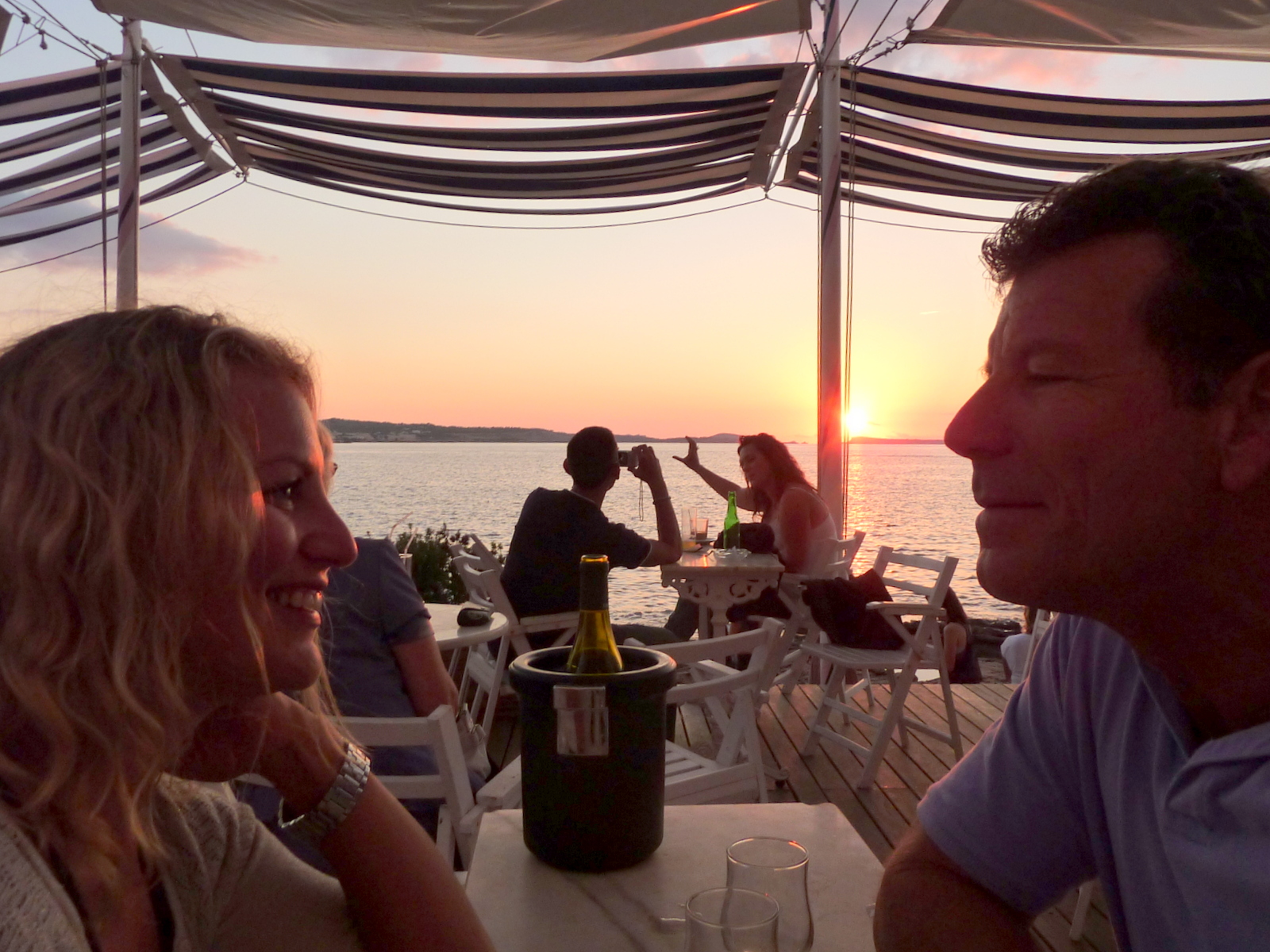 A romantic place to chill out and watch the sunset. . . 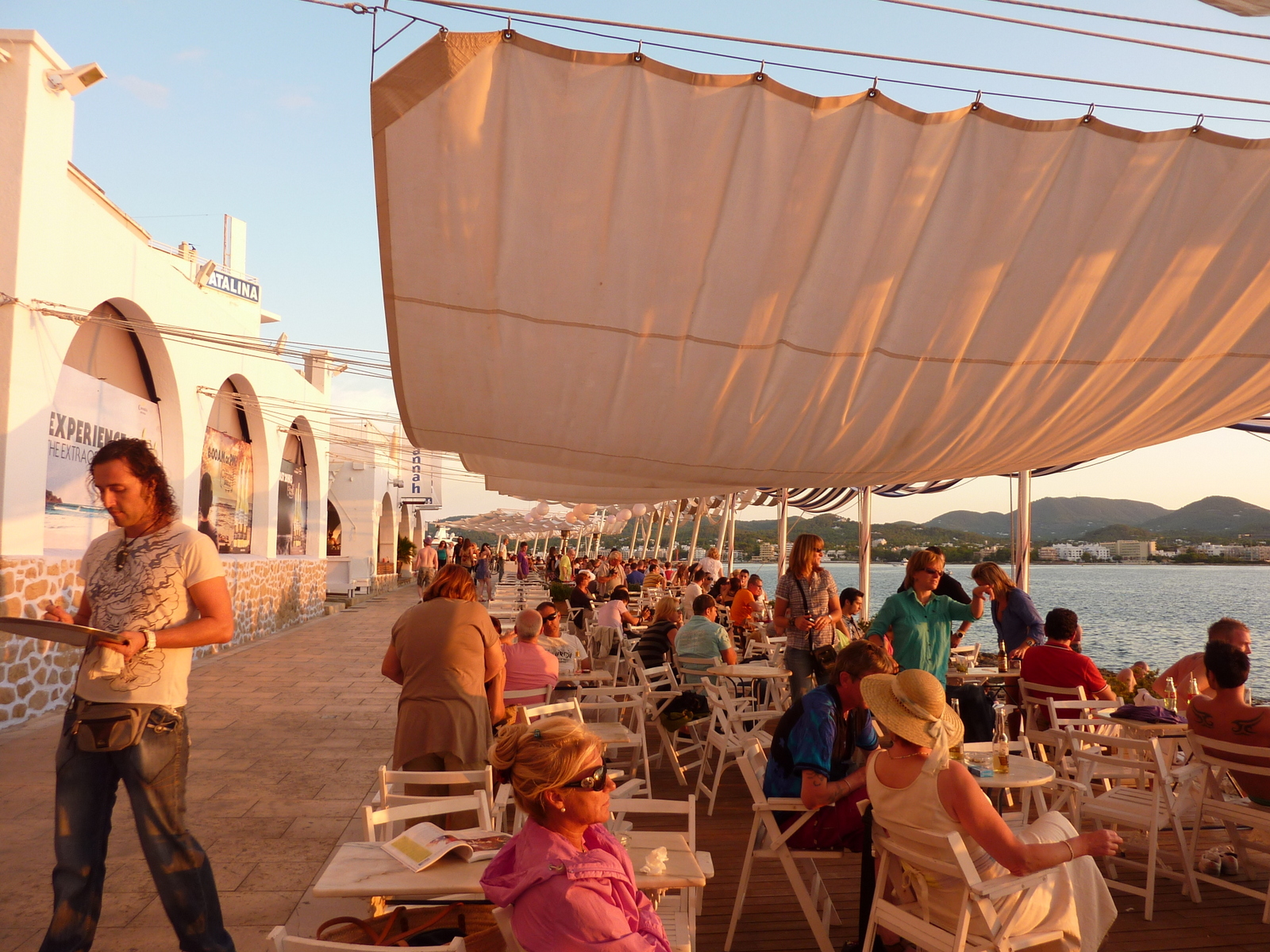 or to drop in for a drink

The following afternoon we set sail for Cartagena on the mainland coast of Spain.