With the weather forecast showing moderate northeasterlies for the next couple of days, we departed on September 2 from Carloforte, the small resort/fishing village off the southwest coast of Sardinia, bound for Mahon in the Balearic Islands of Spain, about 190 miles to the west.  The winds were up and down for the first few hours of the passage, dropping to five knots a few times during the day.  The breeze filled in to a steady 15 knots in the afternoon and peaked at 25 for a time during the evening.  With the wind on our beam, we were able to sail for all but about two hours of the passage, making landfall in the Port of Mahon late the following morning.

We anchored near the entrance to the long, narrow Port of Mahon in a small but well protected anchorage called Taulera Bay.  Taulera has room for only about a dozen or so boats to swing on anchor but is surrounded by medieval fortifications making it quite a picturesque place to hang out for a few days.  Taulera Bay is the only free anchorage in the entire port and located two miles to the southeast of Mahon, about as far away from town as one can get.

Once the hook was down we were immediately greeted by Annie and Liam from Gone With the Wind, old friends who we had spoken to frequently on the Dragnet (a local HF radio cruiser’s net over the past few summers, but had never actually met.  Other Dragnet boats Cristada and West By North were in the bay, providing the catalyst for a party.  Annie and Liam had everyone around for happy hour (6:30 till 11:30 I think it went) that evening aboard their beautiful and spacious 52’ catamaran so that everyone could get acquainted with the other cruisers bringing up the rear of the flotilla heading west to Gibraltar ahead of the Atlantic crossing in the fall.

Our big sister ship Interlude, a Deerfoot 74 with friends Kurt and Katie aboard arrived a day after us, and they hosted another long happy hour.  After being on our own for so long, with a lot of work and not much play, we were soon having too much fun in Mahon.

On Monday morning we made the jaunt into town to do the usual arrival routine: Check in with the Officials, get a local SIM card for the phone and pick up a few fresh provisions. The latter two were pretty easy, but checking in was another story.

Mahon is quite an attractive town with a lot of beautiful colonial architecture. It sits at the top of a cliff, a few hundred stair steps above the harbor.  After picking up the SIM card, I dropped Merima off at the central market where there was an excellent grocery store.

I was directed to start the check in process at the police station up in town.  Everyone there was friendly and helpful, but I was told that I would need a Customs Declaration for the yacht before they could stamp our passports.  They directed me to the Port Police.

I walked back down the steps to sea level and found the Port Police office where I was told I could get the declaration.  They didn’t know anything about this procedure and sent me to the Aduan (Customs) just down the street.  The lady in Customs was friendly and helpful but said that we were not required to have a Customs declaration and that the Port Police should just stamp our passports and we’d be finished.  She gave me her cell phone number to ring if there were any problems.   That phone number would be the saving grace of the day!

I retraced my steps down the street and once again the Port Police didn’t want to know me.  The agent said that they weren’t even in possession of the stamp for our passports.  After a phone conversation with the lady from Customs, I was sent back up the stairs to the Police department in town.  I explained the situation to them in my broken Spanish and they rang the Customs lady.  After another short conversation, a stamp was reluctantly produced, and chop-chop, our passports were stamped and we were officially (I think) checked into Spain.  I caught up with Merima at the grocery store and she wondered why I was so sweaty.

We learned after we arrived that Mahon was preparing for its best and final festival of the season, the Mare de Déu de Gràcia Fiesta which was to start in a couple days time.  We spent the next few days exploring the town of Mahon, dusting off our Spanish (which hadn’t been used in years) and socializing with the other cruisers anchored in Teulara Bay. 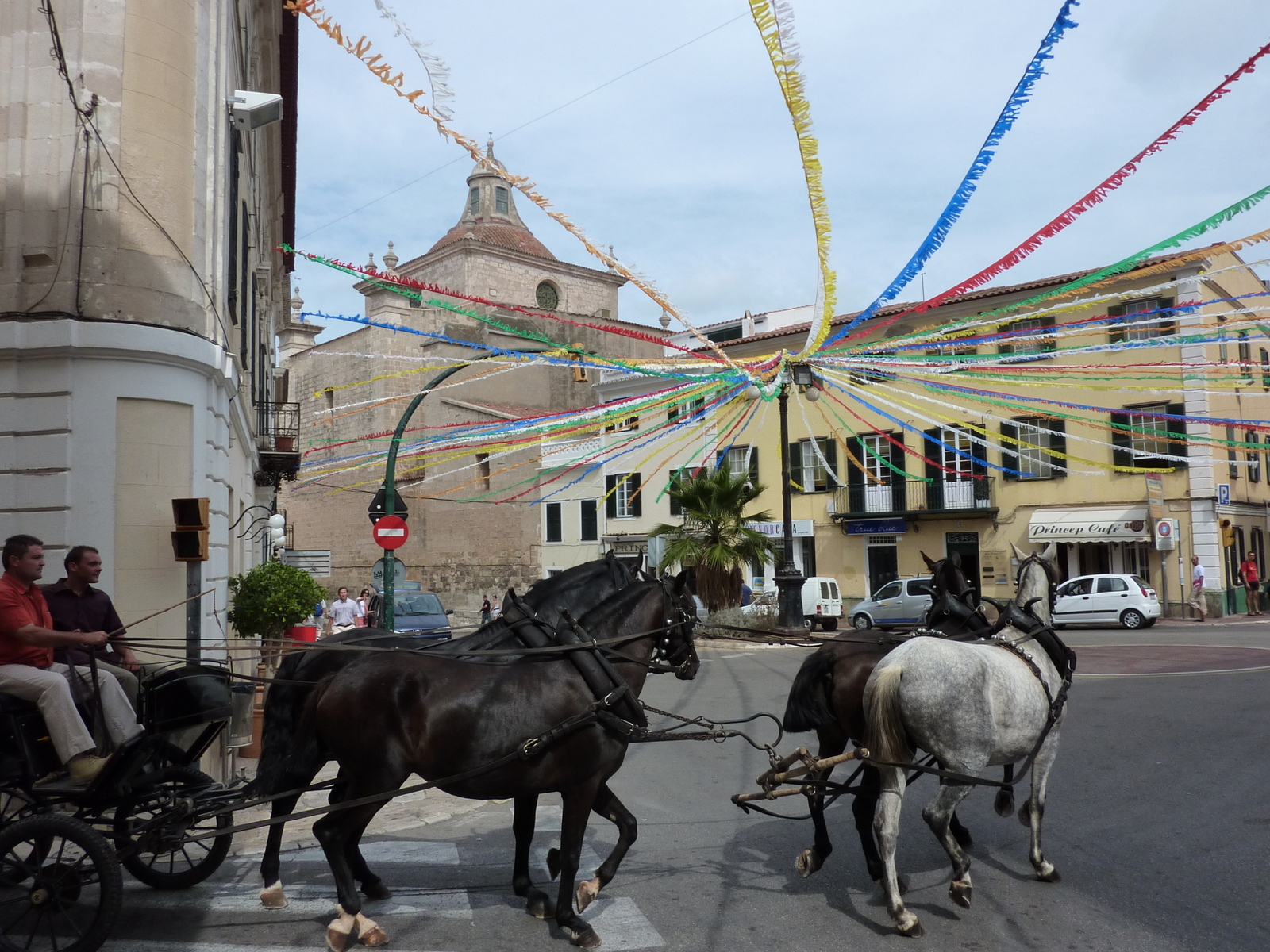 The town of Mahon, decorated for Fiesta

One of the legacies of British rule of Menorca are a few gin distilleries on the island.  We had a taste of a couple of Mahonese gins and found them to be excellent.  Mahon is also the origin of that lovely sauce made from eggs, olive oil and vinegar, often attributed to the French, and called mayonnaise.

For the three days of the Mare de Déu de Gràcia Fiesta, the town of Mahon virtually shuts down and everyone partys in the streets.  Cafes and bars set up mini bars in their front doors and opening windows so they could offer express service to the throngs of thirsty revelers. 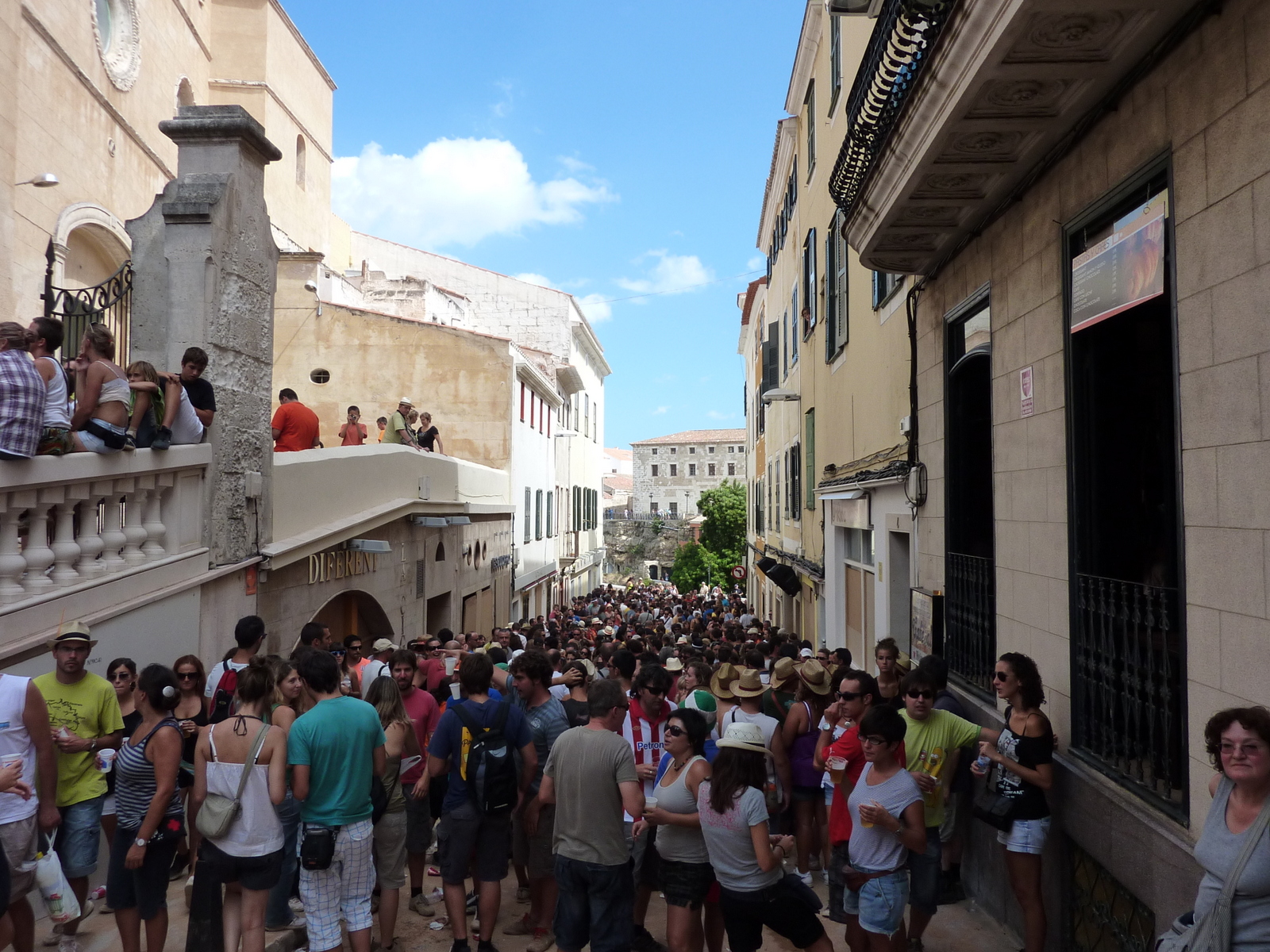 Of the many cultural events that take place during the festival, one of the most breathtaking and spectacular is the dancing horses.  In one of the rather small town squares, a stage was set up where an Oom-Pah band played a loud and endless polka.  Horsepersons dressed in stunning traditional finery, looking very dignified, marched into the square two abreast in an embrace, on ornately decorated horses.  Once in the middle of the square, the horses were commanded to rear up and dance on their hind legs, some hopping for up to a half a block pedaling their forward hooves in the air before returning to all fours. 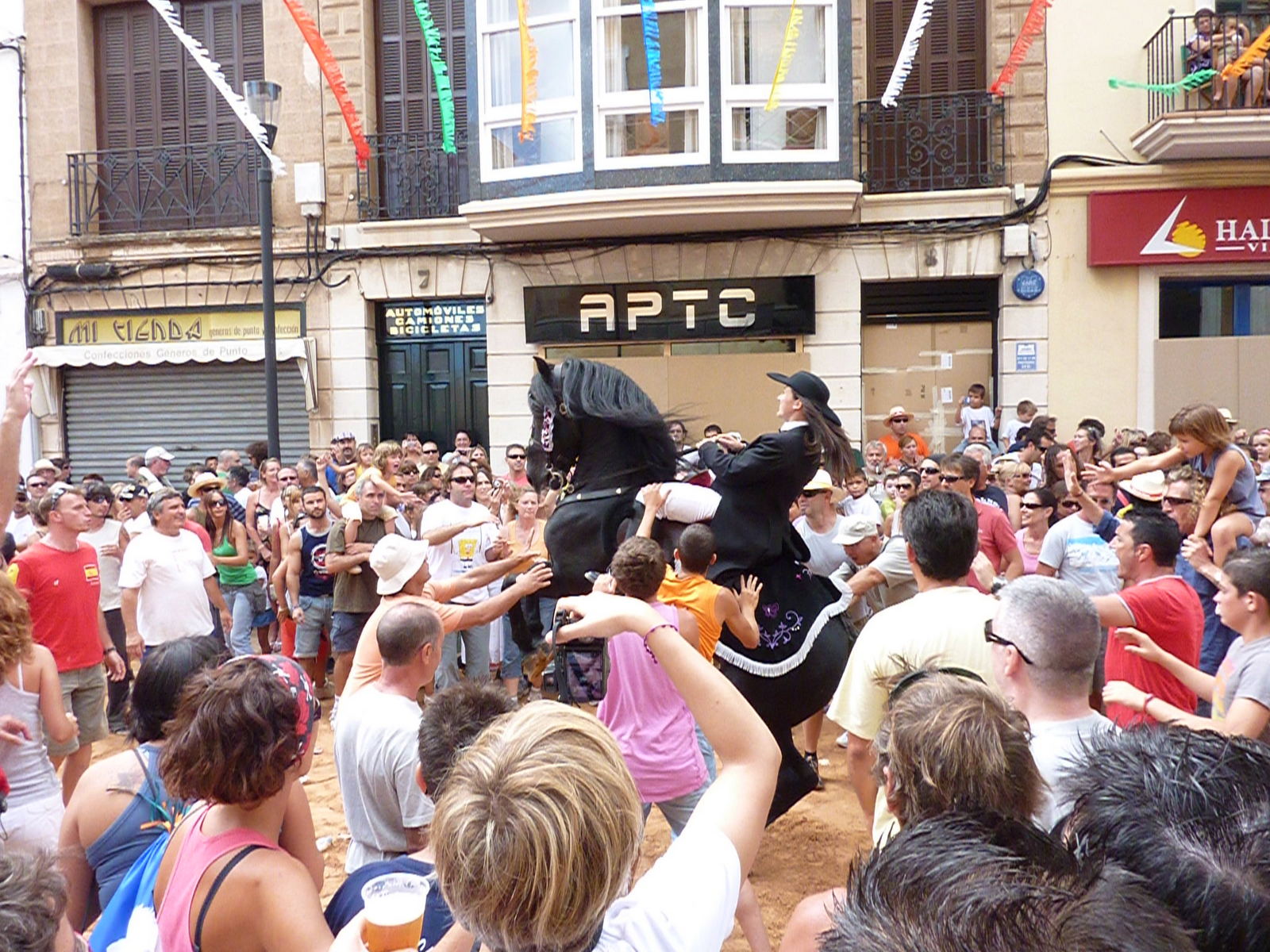 Dancing in the streets, Mahon style

One might think that the spectators would be safely cordoned off from these massive beasts rearing up and kicking their fore hoofs in this spectacular dance.  No, this is Spain, where the people love to get up close and personal with large and potentially dangerous animals.  There were no cordons nor any form of crowd control to be seen.  When the horses danced, the spectators rushed up to put a hand on the flank of the horse or the back of the rider as if to offer a bit of support.  Those caught in front of a rearing horse parted ways like a shoal of fish avoiding a feeding shark.  I suppose this spectacle was sort of a lite version of the running of the bulls.  We found ourselves being pushed by the heaving crowds as the horses unexpectedly changed directions. 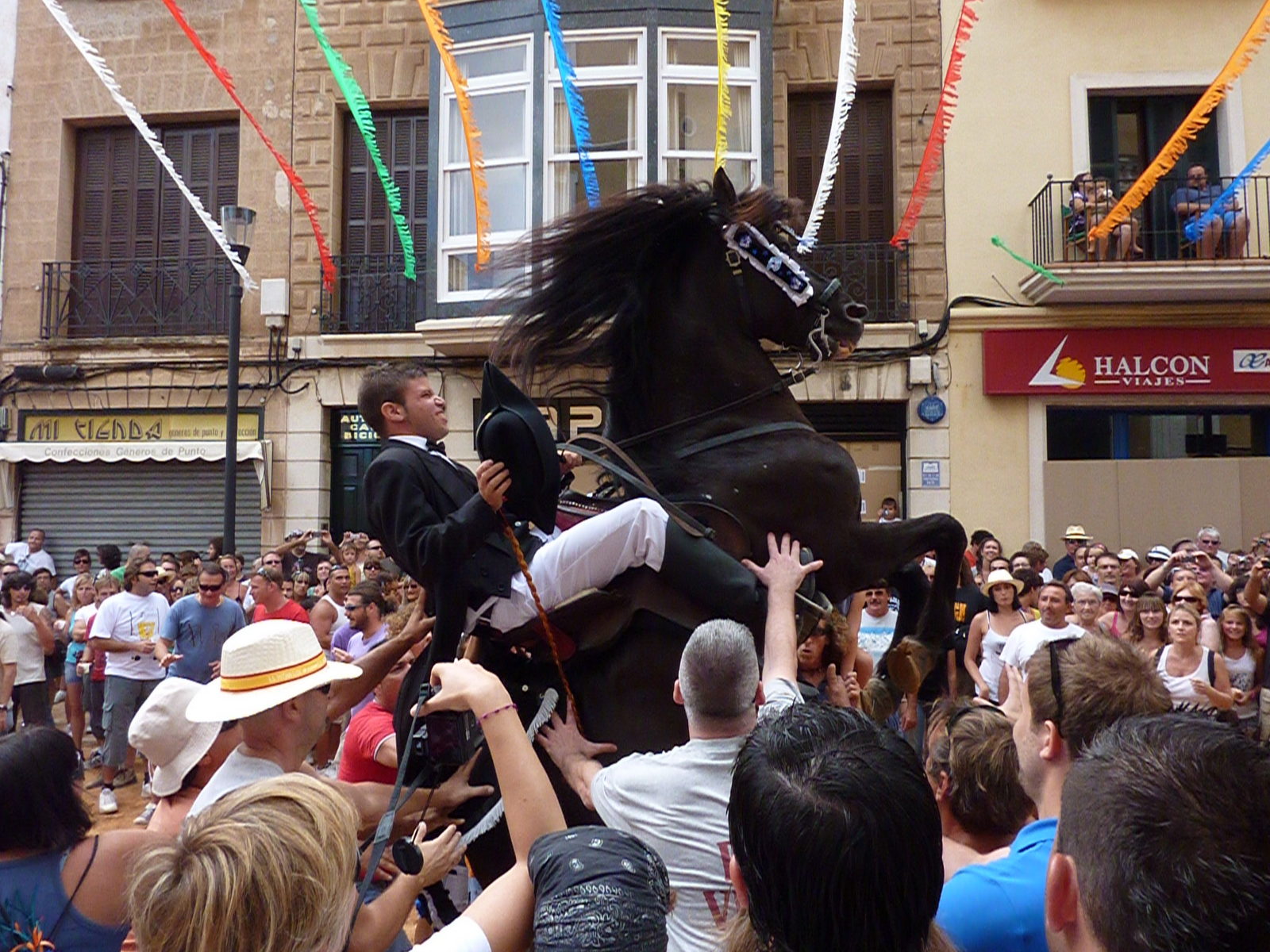 One hand for the horse, one for the hat

The crowds loved every step of the dance, often cheering so loud that they drowned out the music of the band.  If the crowds appreciated the show, the expressions on the faces of the riders were of joy and ecstasy.  Totally enjoying the rides and the appreciation, they could have, and did, go on for hours until the horses were in a lather. 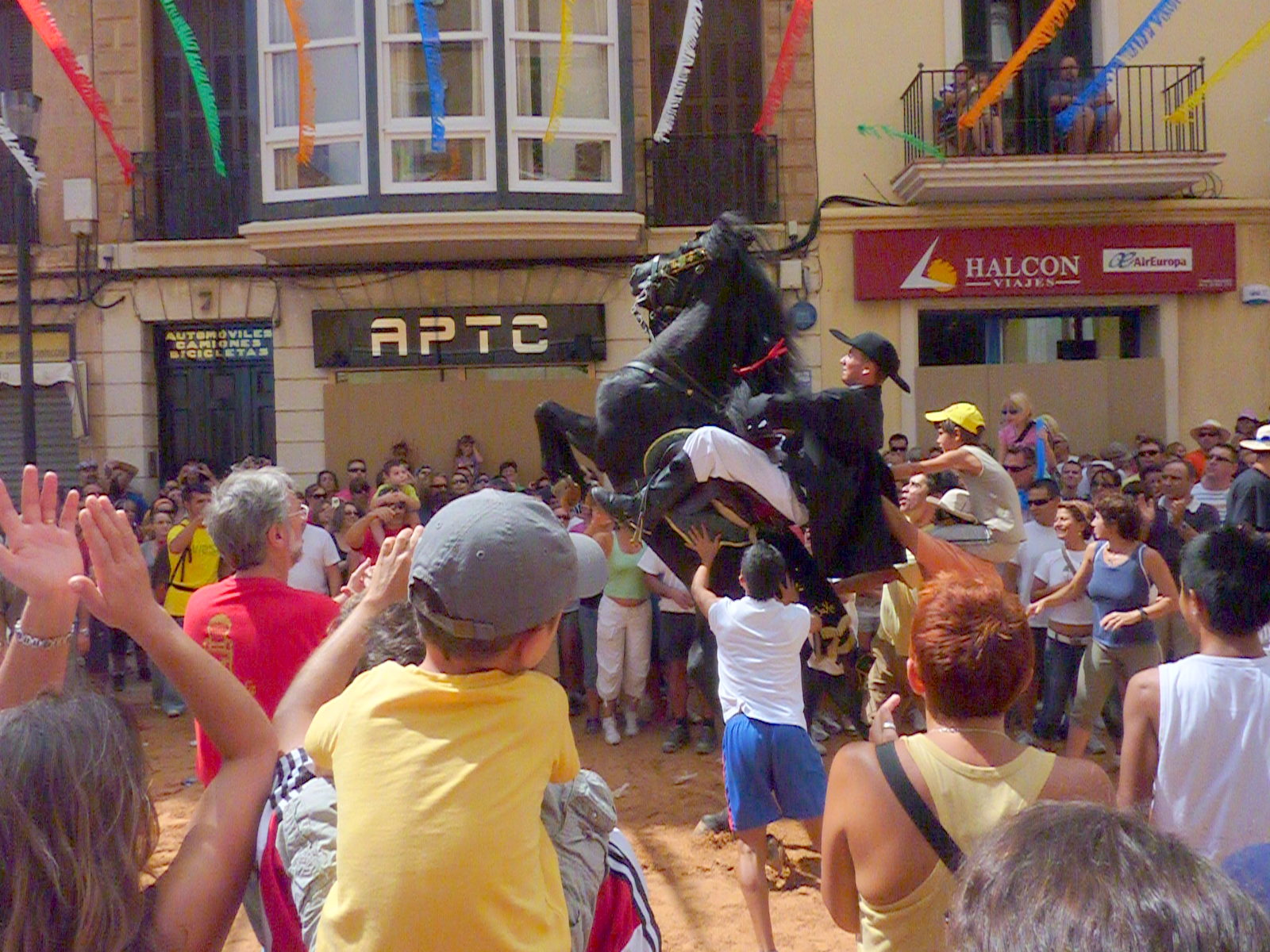 Spectators offering a bit of support.

After nearly a week of fiesta, it was time for some siesta.  We headed around to the south side of Menorca to find a quiet place to anchor and relax.

One of the features of the Balearics that makes them attractive to cruising yachties are their numerous calas or small indented bays that punctuate the rocky coastlines of the islands. Many are so small as to only allow room for one or two yachts to swing on anchor.  The larger ones are usually the site of an old fishing village that has been slowly taken over by tourism. 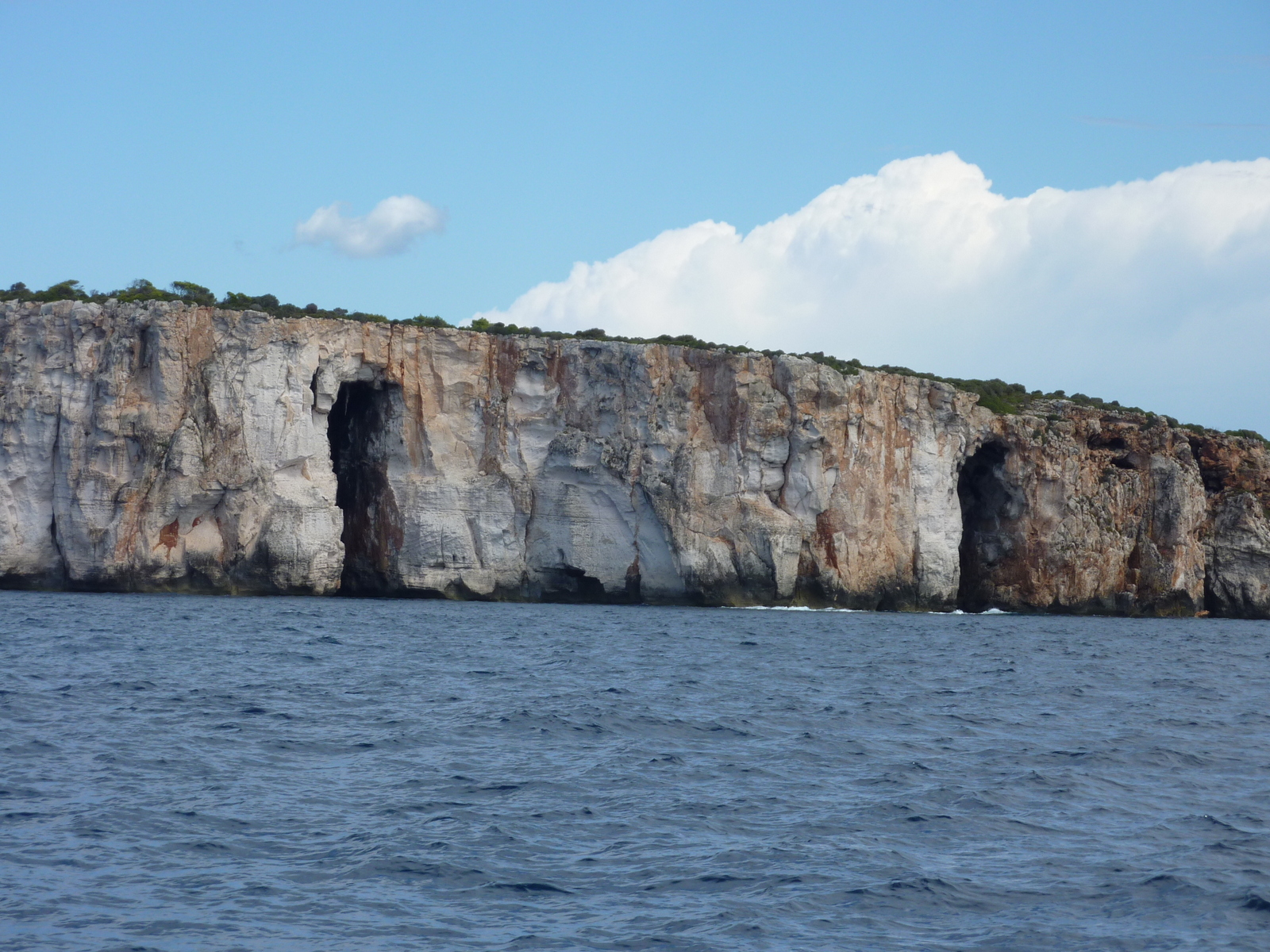 We said adios to Mahon and in company with our new old friends on Gone With the Wind headed around to the south coast of Menorca and found reasonable anchorage in Cala Mitjana where we would chill out and await favorable weather for the passage across the channel to Mallorca. 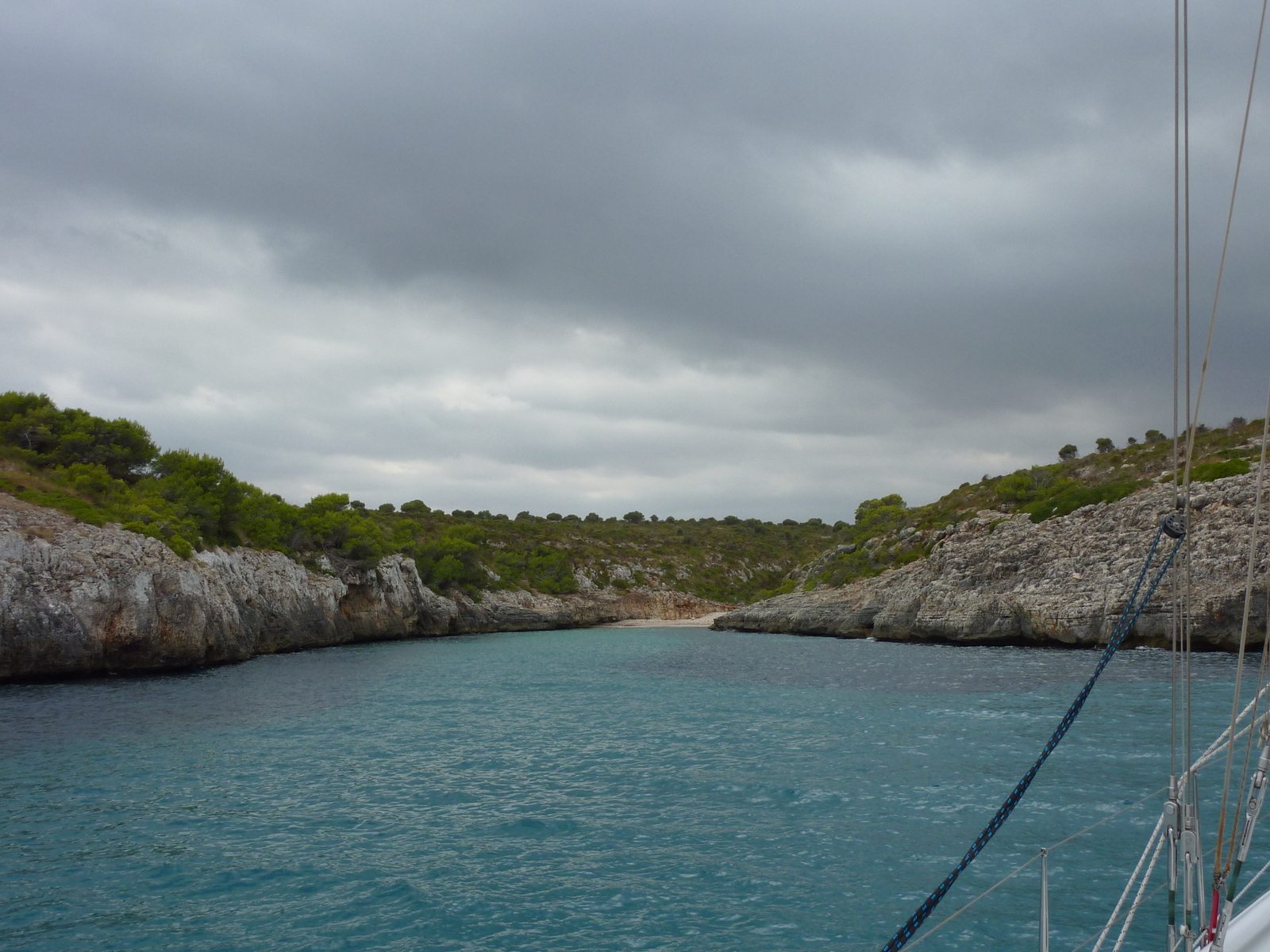 One of the many calas that indents the coast of Menorca