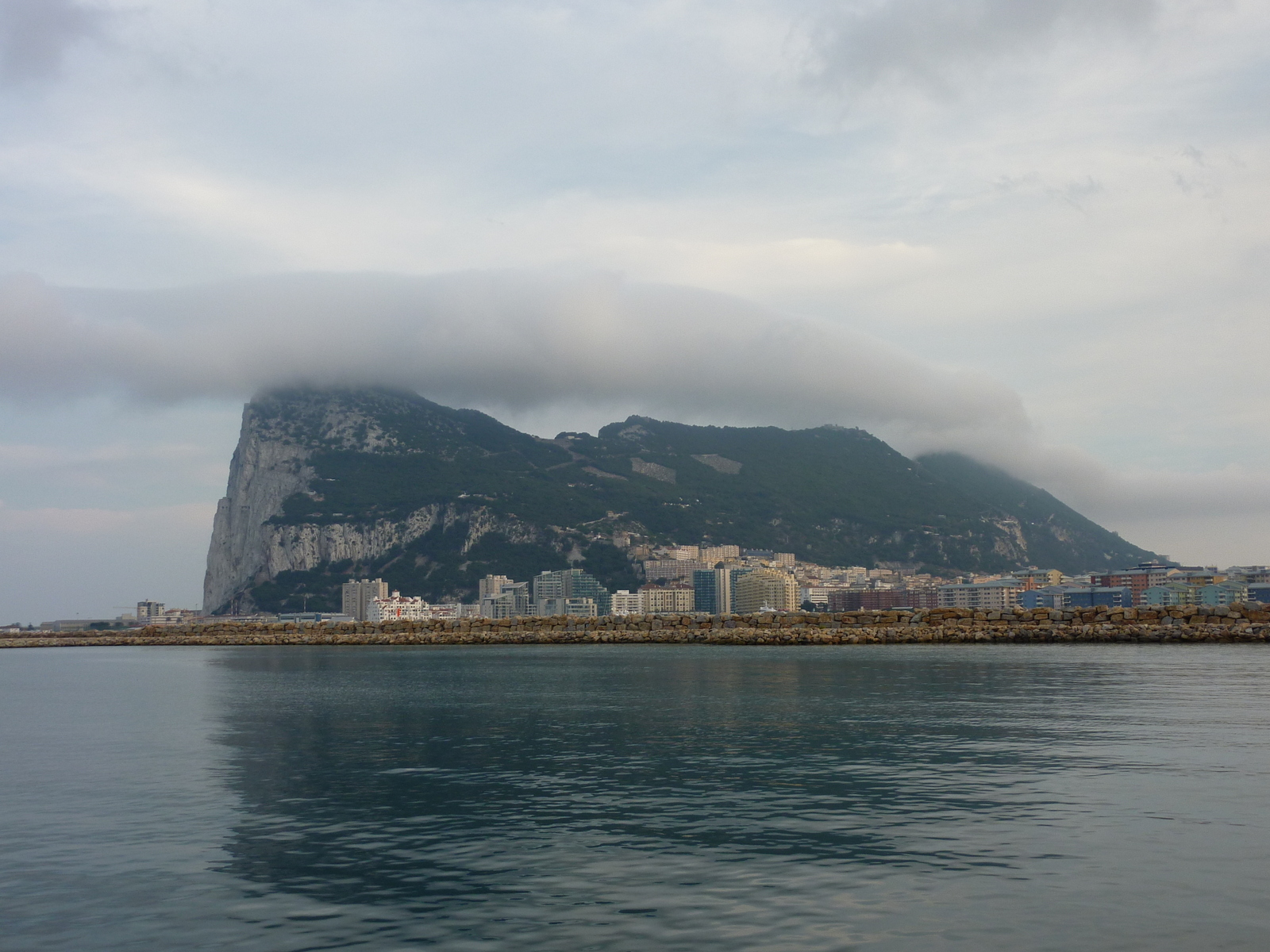 “The Rock” viewed from the anchorage at La Linea

The Rock of Gibraltar began to show its outline through the overcast from a range of about ten miles.  We had lifted the anchor earlier that morning just as a brilliant red sun breached the horizon and had already motored more than 40 miles in dead calm waters from the Spanish coastal town of Torremolinos.

We watched as an endless stream of shipping traffic passed through the Strait of Gibraltar on their way to or from the Atlantic Ocean or the Mediterranean Sea.  We hugged the shoreline off the southern tip of “the Rock” to stay well clear of the shipping lane as we made our way into the Bahia de Algeciras.

A long spell of “settled” weather meant that we had motored or motor-sailed most of the last 400 miles since we had reached Ibiza so we had burnt up quite a bit of dinosaur juice.  Diesel prices in Gibraltar are substantially less than in Spain, so we stopped at the fuel dock at Marina Bay to top up our tanks.  Three fuel vendors share a long piece of bulkhead and each had an attendant trying to hawk us in to their own pumps.  We opted for the first outfit, Cepsa, who was reported to have the lowest prices of the three.

After fueling, we made our way past the Gibraltar airport runway, giving it a wide berth should a plane come in low on final approach.  Gibraltar’s airport runs east/west bisecting the narrow peninsula just south of the border with Spain and protrudes out into Bahia del Algeciras.  We dropped the pick behind the protection of the breakwater at La Lìnea for the evening where we enjoyed a spectacular view of the Rock.

The next morning we moved over to the Queensway Quay Marina adjacent to the town of Gibraltar.  It is one of the few places in the Med where marinas are still reasonably priced, costing less than a third of most comparable marinas in Spain, Italy and France.  We tied up just before a heavy rain started to dump and I managed to rinse off the decks so we could collect some of the rainwater.  If berthing is cheap, the charge for water is 1 pence Gibralter (about 1.6 US cents) per liter.  By the next morning, Moonshadow was squeaky clean and the water tanks were overflowing. 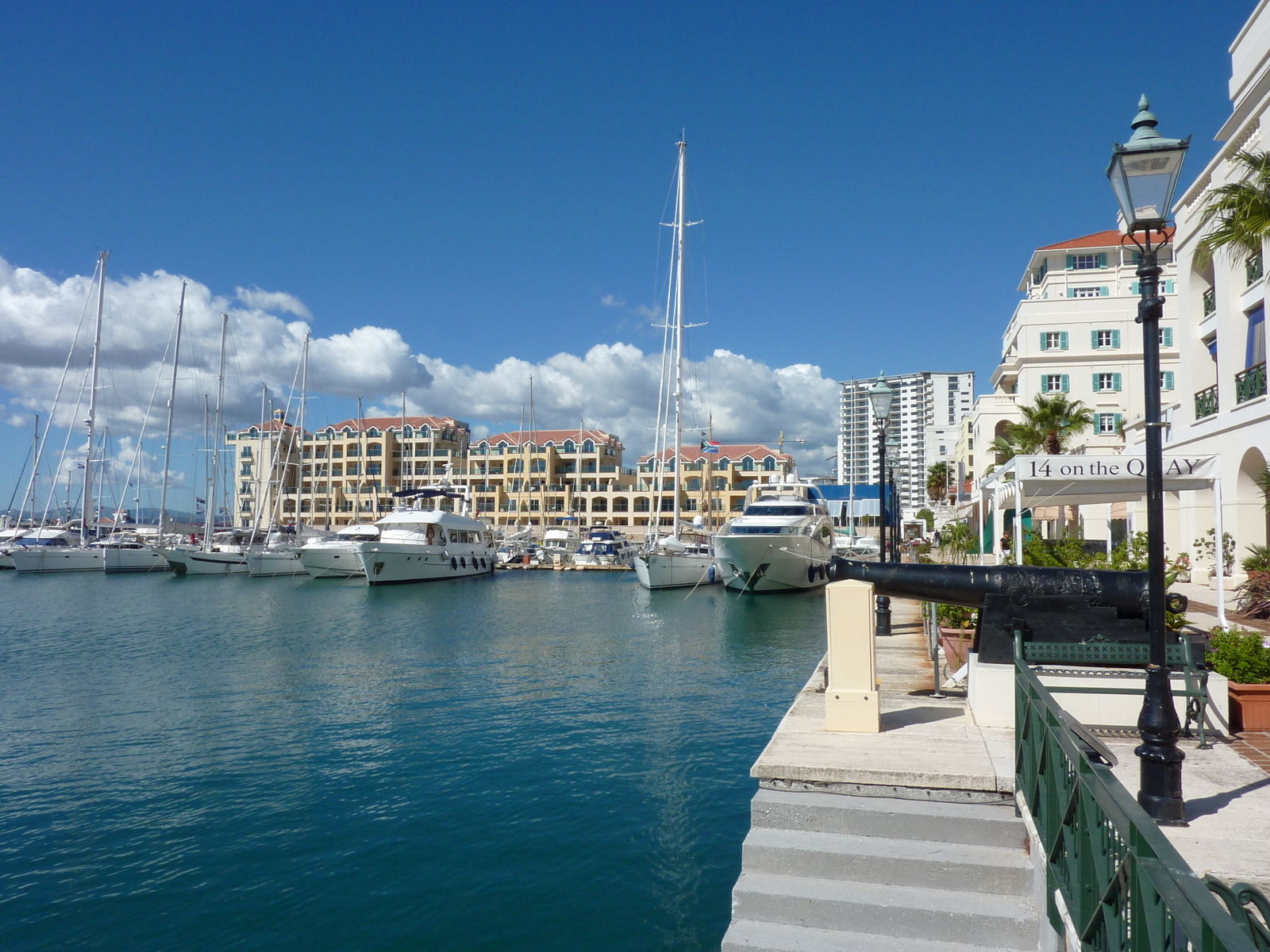 We took a stroll through the town of Gibraltar and on the way back stopped into the huge supermarket called Morrisons, part of the large chain from the U.K.  They cater to the British living in the Colony of Gibraltar and we found many things we hadn’t seen in awhile, including some favorites like ginger nuts (a.k.a. ginger snaps) and New Zealand sauvignon blanc.  Food prices were a tad on the high side compared to those at Carrefour in Spain but we did find exceptional prices on spirits in town at a number of duty free type shops lining the main street. 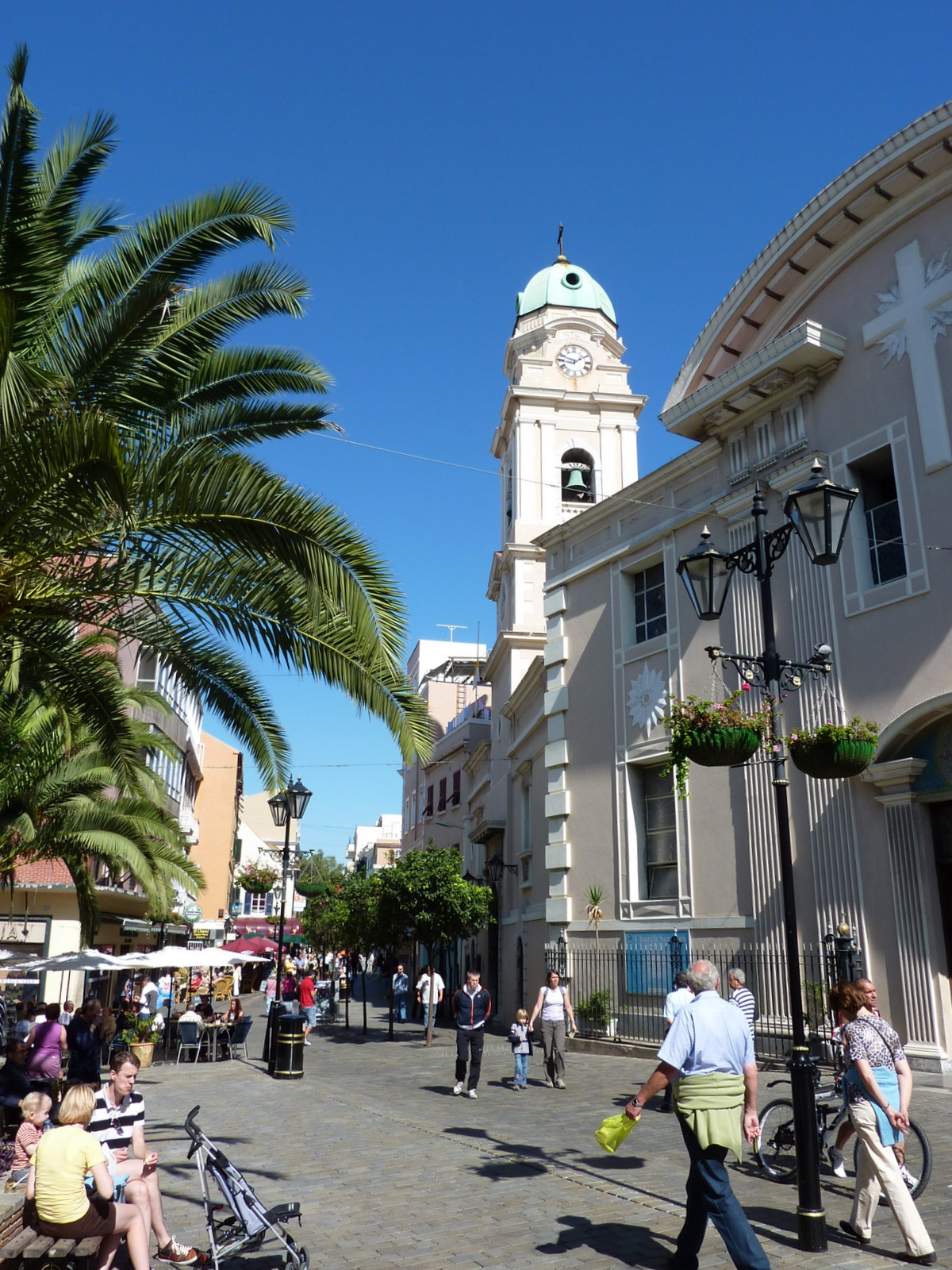 Gibraltar town is set at the foot of the rock and is rather compact.  Most of the streets are barely wide enough for one car and only a few are two way.  Most of the town’s people live in apartments and the only detached homes we saw were a ways out of town on the side of the rock. One can easily walk from one end of town to the other in half an hour and from the base of the rock to the waterfront in five minutes.  Most of the action takes place along a long meandering pedestrian-only street, appropriately called Main Street, which runs the length of town.  The predominant architecture is 18th to 19th century British with a few bits remaining from before or added after.  Because of Gibraltar’s history as a strategic military strong hold, there are plenty of walls, bastions, fortifications and old government buildings remaining.  Old cannons can be found everywhere. 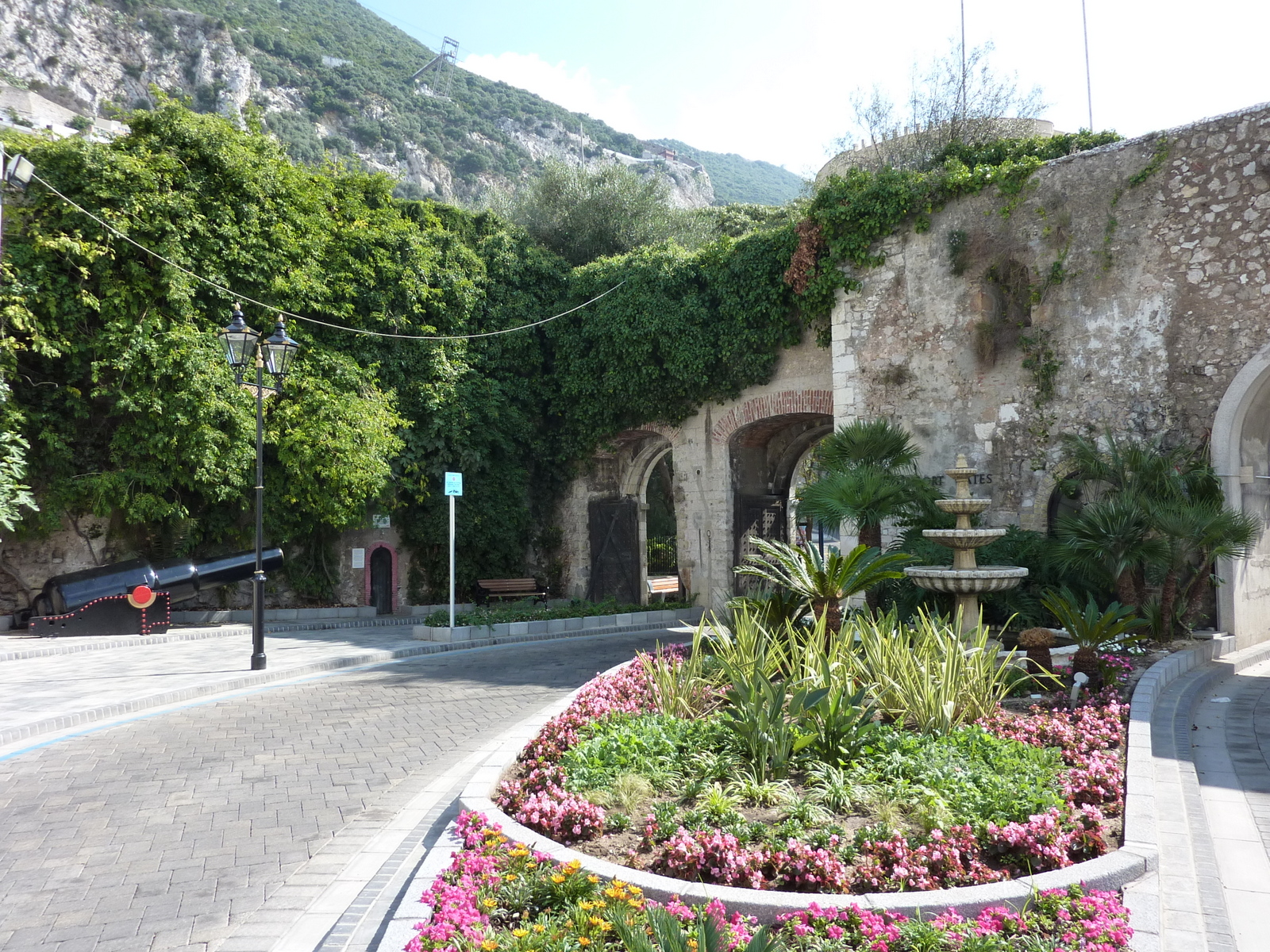 Some of the old fortifications have been turned into gardens 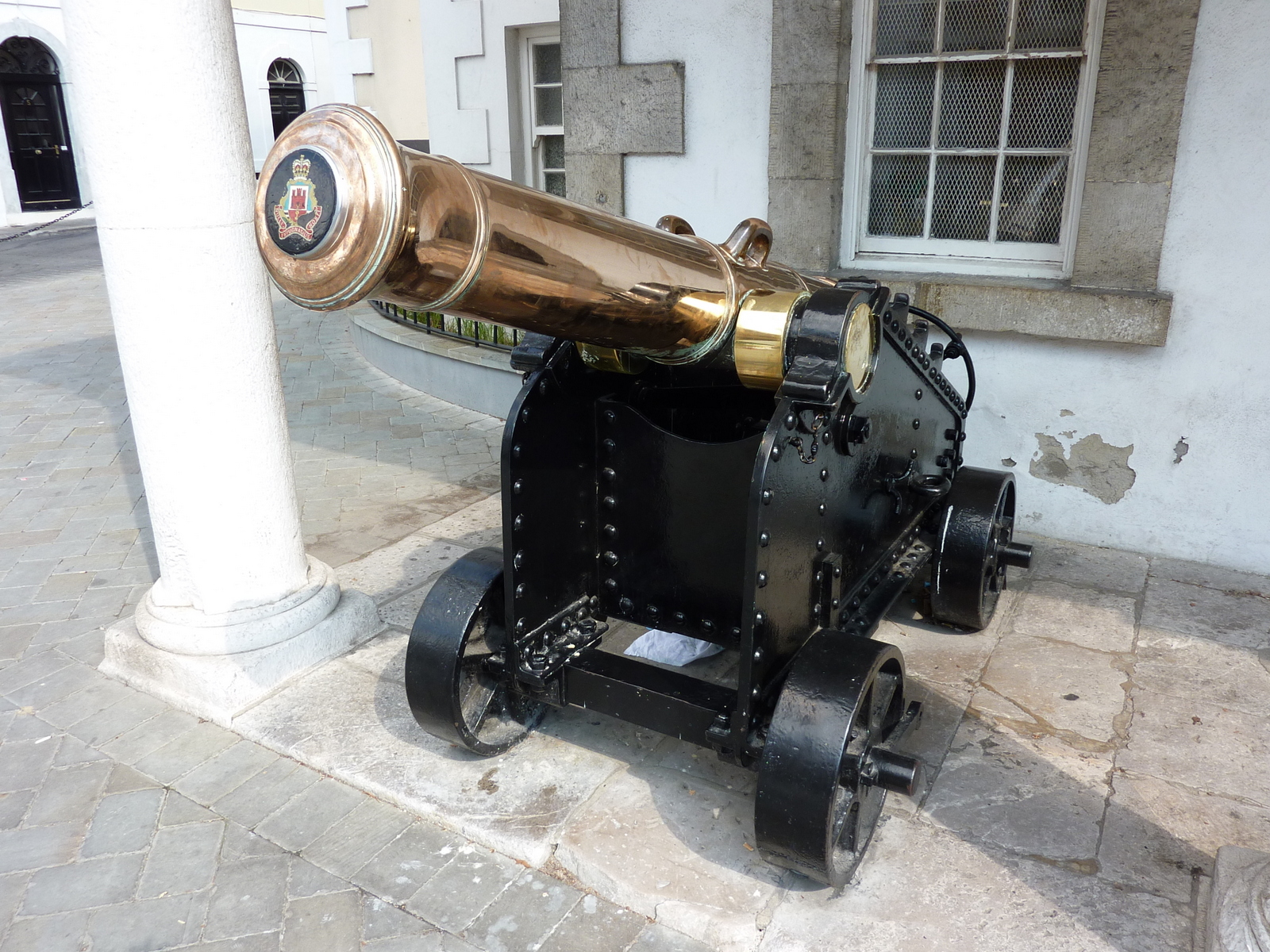 Old cannons are everywhere but this one is a beauty

Most of the residents are British ex-pats or Spaniards, as are most of the tourists.  The establishments in town are typically pubs offering casual “pub grub” type meals.

One clear afternoon we tried to catch the cable car (aerial tram) to the top of the Rock.  The queue for tickets was long and the wait for the cable car even longer.  We decided to take advantage of the nice weather, get a bit of exercise and walk to the top.  An hour later we had reached the terminus of the cable car in the saddle of the Rock and were amongst a crowd of people and a horde of Barbary Coast Apes.  The people were looking at the apes and the apes were mostly ignoring the people and enjoying the view of the water or napping. 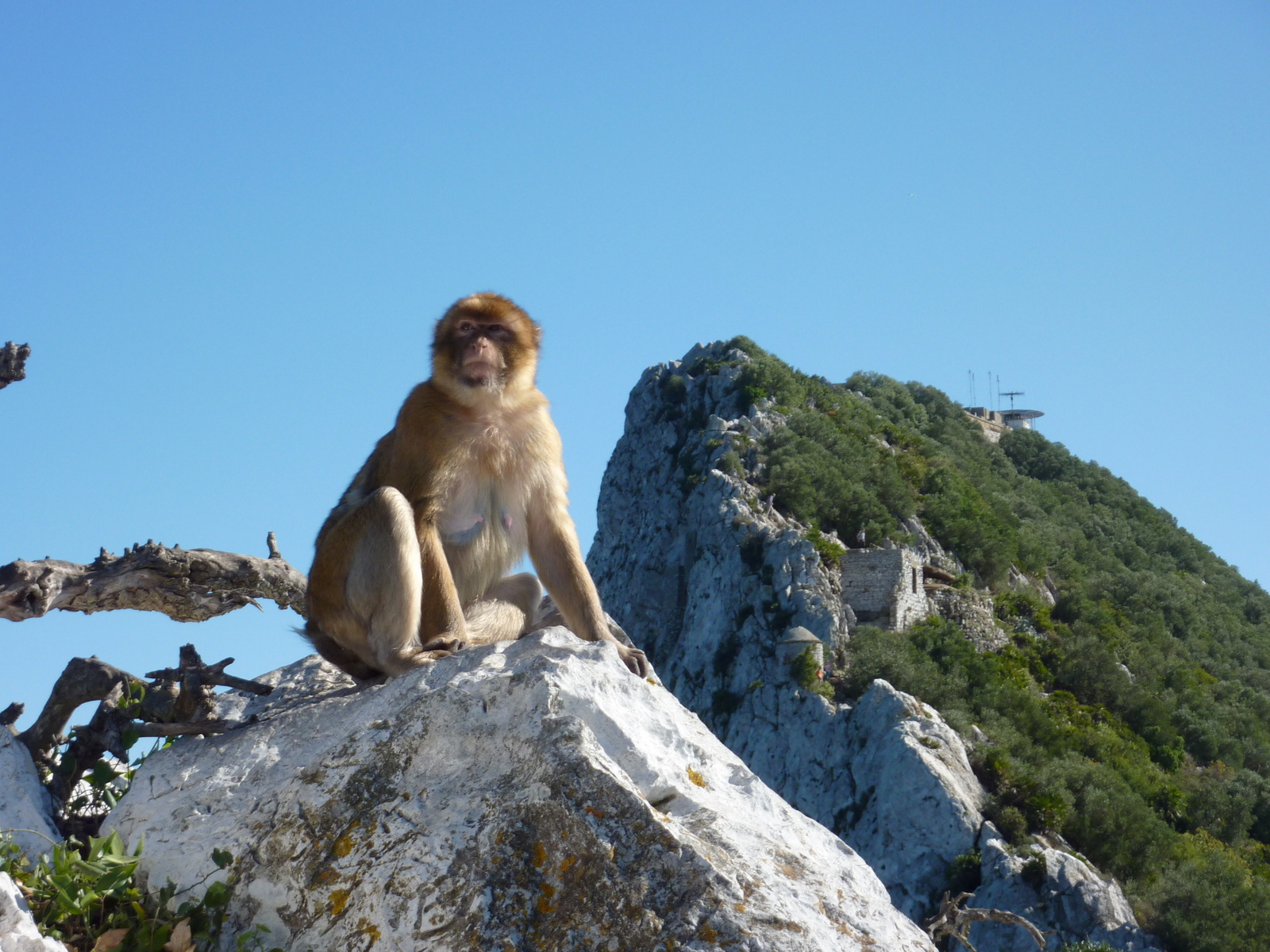 In contrast to the feisty macaques we had encountered in Southeast Asia, these relatives were very subdued and seemed to be very comfortable when they were approached by humans. We were warned not to touch them, but we did see a few tour guides picking up some of the little ones.  The only incident we saw was one of the apes trying to steal a fanny pack off one of the women in a group of tourists. 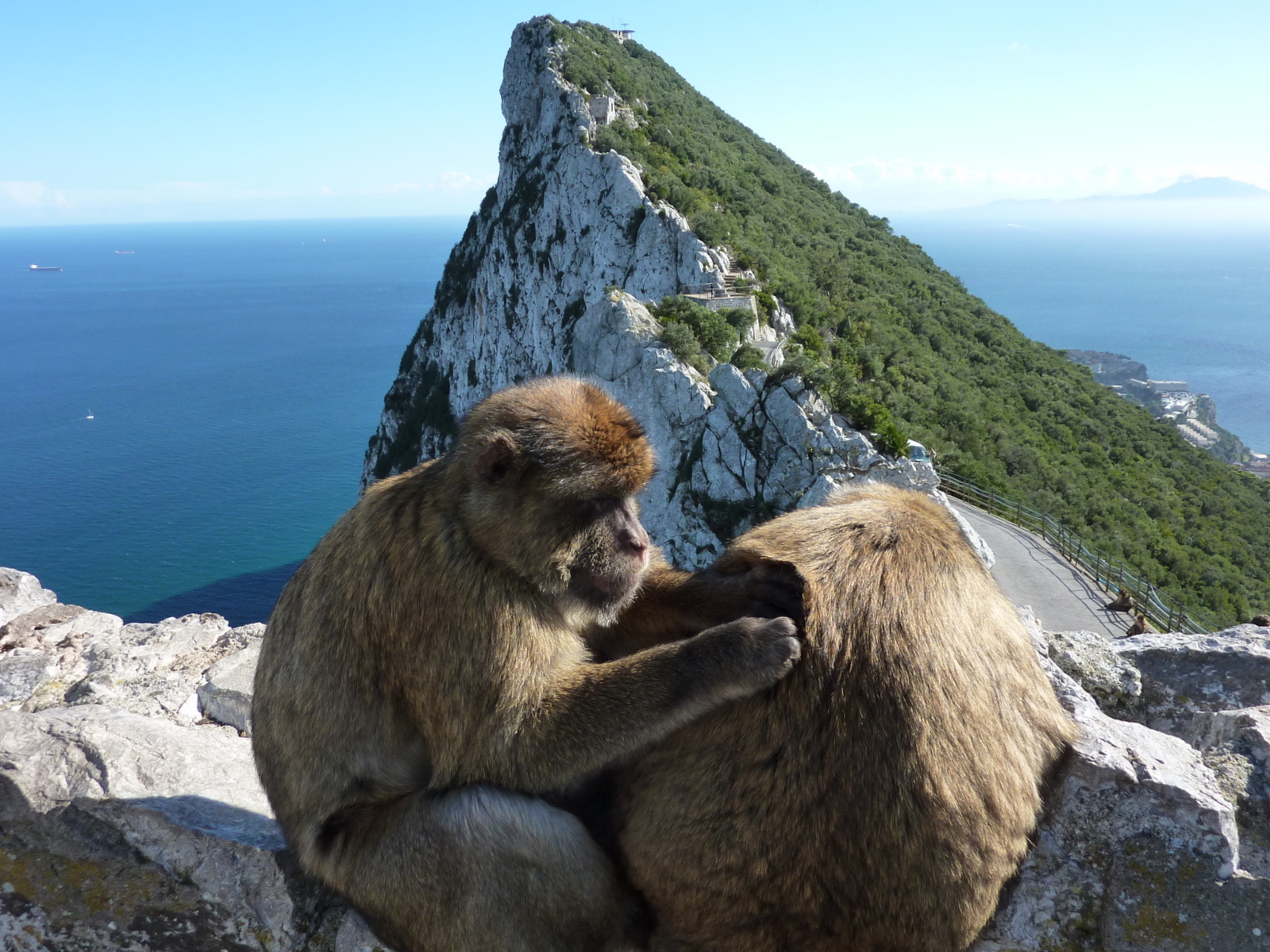 The ape on the left was picking nits off its partner-then eating them. The Atlas mountains of Morocco appear upper right

The visibility was excellent and the views from the Rock were magnificent.  We could easily see 50 miles up the Mediterranean coast of Spain and across the Strait of Gibraltar to make out the profile of the Atlas Mountains of Morocco.

Taking a shorter and steeper route back down, 45 minutes later we ended up more or less in the middle of town and wound our way through narrow residential streets back to the marina. 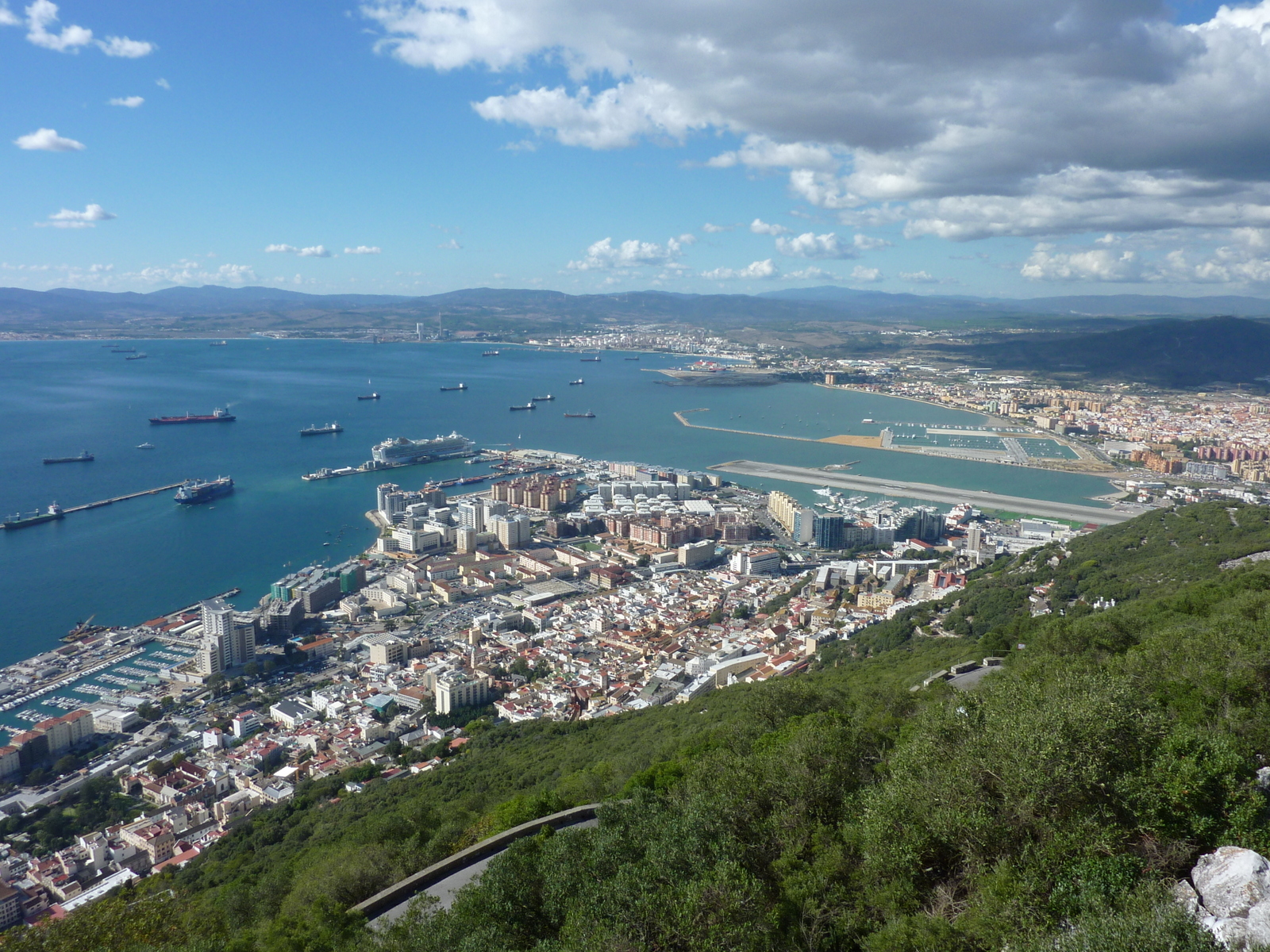 View of Gibraltar Town from the Rock.  The airport runway is right of center 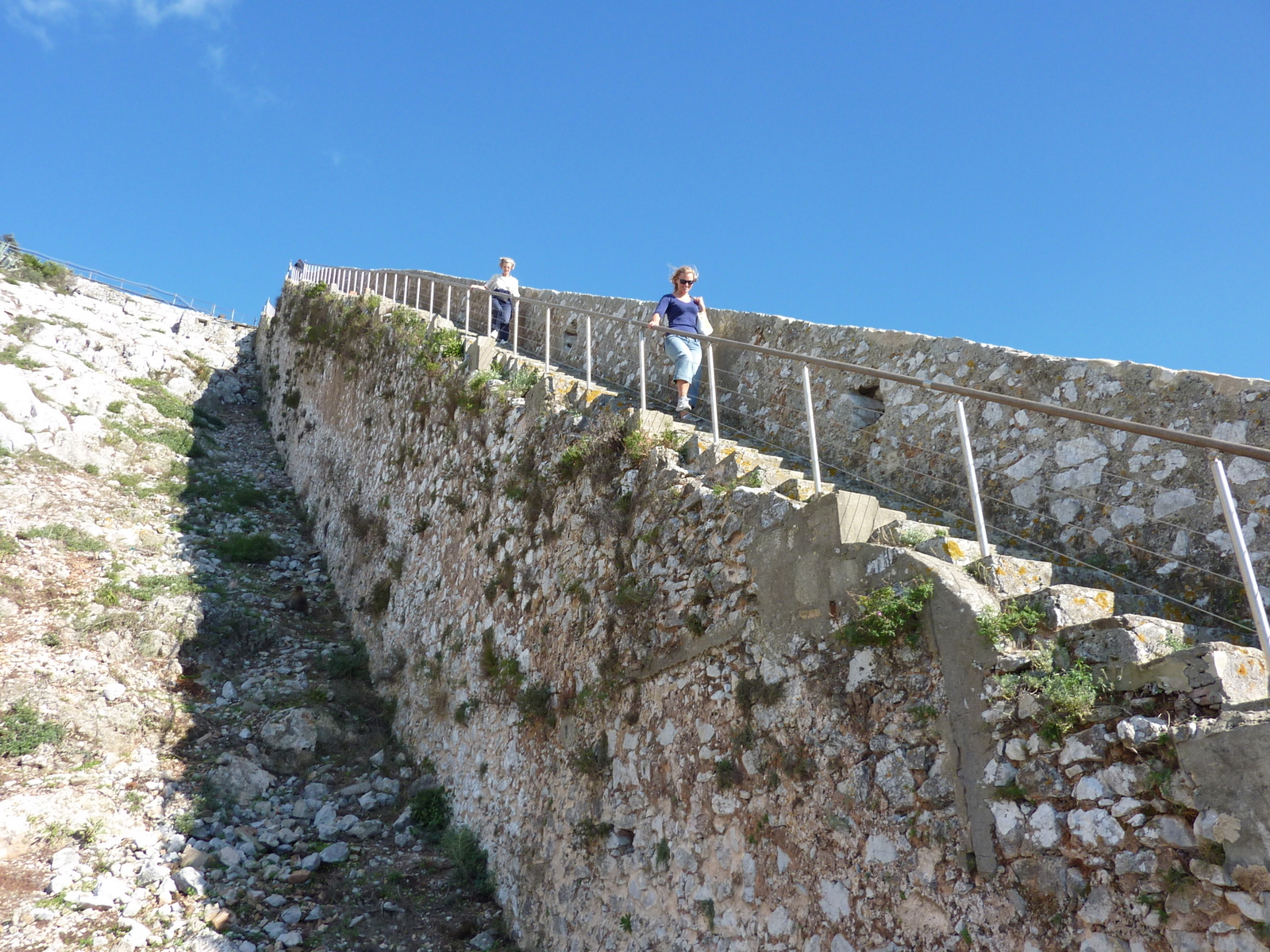 Merima taking the stairs down from the top of the Rock

Spanish gas companies will not fill any foreign LPG (Liquefied Petroleum Gas for the stove) bottles.  Gibraltar will not fill any gas bottles whatsoever and import all their gas from Spain.  As a result we found ourselves down near the bottom of our reserve bottle and in need of refills.  Numerous calls and an email to the guy recommended by the marina were not returned.  We had heard from some cruiser friends about a fellow named Dirk located up on the coast of Spain in the town of Estepona, about 30 miles from Gibraltar, who will fill any type of bottles.  Unfortunately Dirk doesn’t offer delivery service, so we had to hire a car to take our tanks to him.  If Dirk was a bit out of the way, he was fast, friendly, helpful and reasonably priced.  If you come to Gibraltar and need LPG, we would recommend you contact Dirk in Spain on 616 96 94 96 or 644 135 071.

Rental cars are much cheaper in Spain than in Gibraltar.  If you happen to be staying in Gibraltar, you simply walk to one of a half dozen agencies located just across the border. We booked on line at www.economycarrentals and saved about 50%.  A few hundred meters before you cross the border into Spain, you must cross the runway to Gibraltar Airport, which bisects the peninsula from the Med to the Bay of Algeciras.  A crossing gate, similar to those used at railway crossings, holds car/bike/foot traffic when a plane is taking off or landing.  Other than long queues of cars going in to and out of Gibraltar during rush hour, crossing the border is a simple affair that involves little more than waving your passport at an uninterested official at the border. The border of Spain is just across the Gibraltar Airport runway 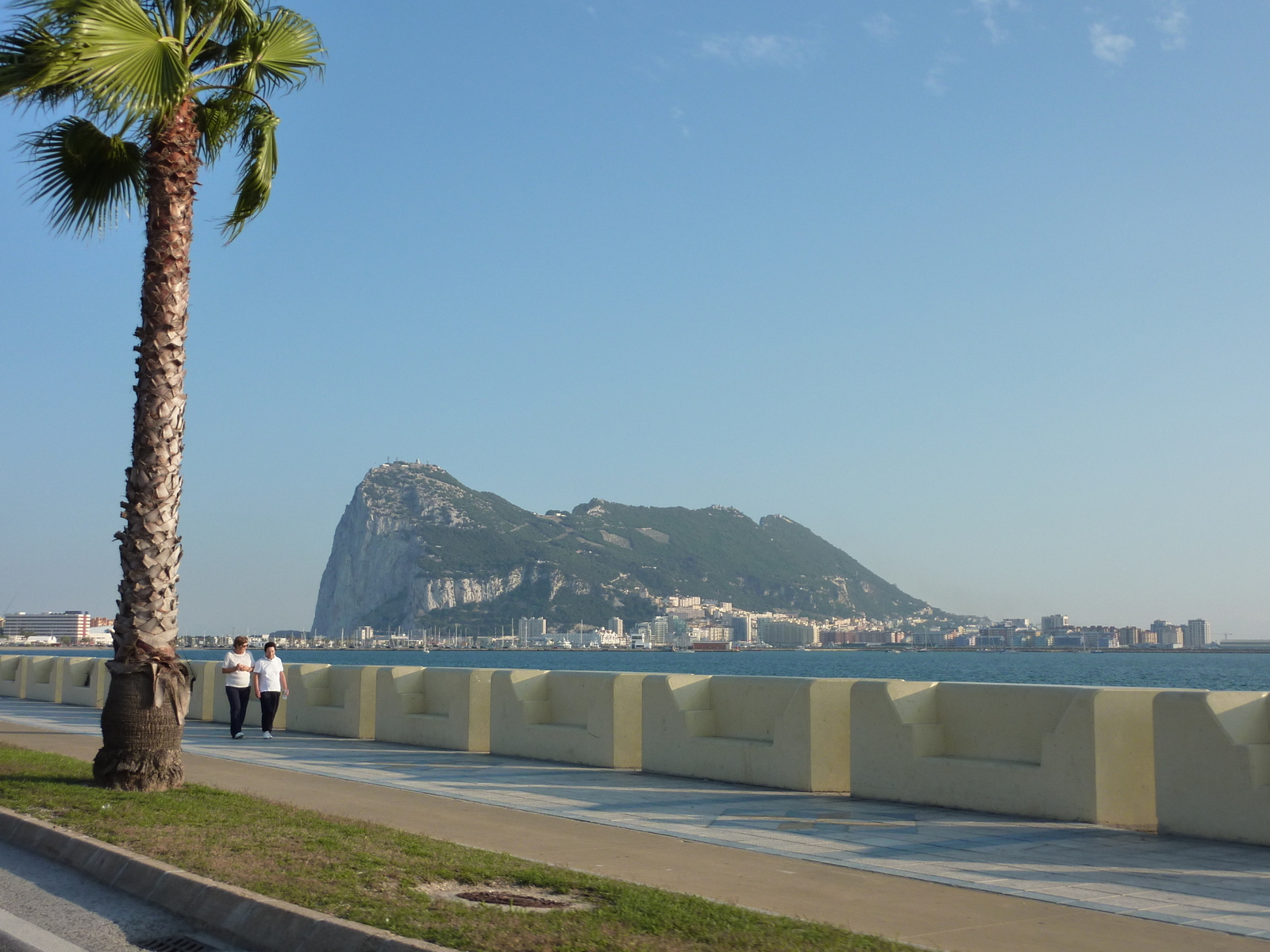 The return trip to Gibraltar is a bit more scenic

We actually rented the car for four days, and joined by the Windies, we did some inland touring to the lovely mountain village of Ronda and the old Spanish cities of Seville and Cadiz.  We’ll have more on the road trip in the next posting.

This entry was posted in All Cruising Logs, Gibraltar, Mediterranean Logs. Bookmark the permalink.