With the prevailing northwesterlies forecast to continue for a few days and Moonshadow back in sailing trim, we planned to set sail for Malta on 23 June.The last job prior to departure was to “mow the lawn” or clean the bottom.Our two-year-old anti-fouling paint had lost most of its “anti” qualities and after sitting stationary for seven months in the nutrient-rich Tunisian waters the bottom was definitely foul.A bustling ecosystem was flourishing on our bottom and some of the most prolific plants had reached a meter in length.Not a very good nor fast look.

With paint scraper in hand, I sucked the air out of two full SCUBA tanks while removing the thick layer of accumulated organisms.Scraping the soft growth off the bottom was about as close as I have ever come to shearing a sheep.The tiny sea mites and shrimp living in the artificial reef swam for cover from the disturbance, most of them seeking refuge on or in my wetsuit, causing major itching while they were alive, and a foul odor after they died. Check-out formalities in Monastir were relatively easy as the Customs and Police offices are situated right in the marina.Since Merima is a New Zealander and had overstayed her visa by two weeks, she had to pay an extra 20 Dinar (US $12) and wait a few hours for the proper paperwork to be processed before we could depart Tunisia.By 10:00am we had been cleared and were ready to go.

We tossed off the lines and headed out of the marina in very light air, setting the main and motor sailing.Within a half hour, a pleasant ten-knot breeze had filled in just forward of the beam so we were able to unfurl the genoa, kill the engine and make some reasonable speed under full sail.The perfect sailing conditions were a just reward for the previous two weeks of hard and sweaty labor it took to tidy up and recommission Moonshadow.Our course was set due east, 185 nautical miles to the island of Malta.

The winds stayed in the mid-teens through the evening, peaking at 25 knots for a while and dropping back to around 10 for some short periods.Even with a very average bottom we were able to maintain an eight-knot average speed.

Sailing on the rhumb line, our course took us within sight of the island of Linosa, which was illuminated in moonlight.Linosa is one of three small islands that form the remote Pelagie Island group, which is part of Italy.Interestingly the Pelagies are situated more than 80 nm southwest of Sicily, which means they are further south than both Malta and the northernmost tip of the African continent.

We arrived after sunrise at the first waypoint we had plotted in the middle of the channel formed by Gozo and Comino Islands to the north and Malta to the south.From there, the approach to Valetta, the main harbor on the east coast of Malta, was straight forward.

Malta looks distinctly different from Italy to the north and Africa to the south.Even though the Ottomans were driven out five hundred of years ago, much of their distinctive style architecture remains.There is little distinction however in the color of the earth-tone or unpainted stone low-rise buildings and the surrounding barren, rocky land.Much remains of the early fortification that has resulted from Malta’s tumultuous history.

We entered Marsamxett Harbour, leaving Fort St. Elmo on the seaward end of Valletta to port and Fort Tigne on the promontory off the suburb of Sliema to starboard.Heading into Lazaretto Creek on the west side of Manoel Island we headed for a berth in the Manoel Island Yacht Harbour where we were assisted by two friendly dock attendants in tying up to a crumbling old bulkhead between two mega yachts. The trip took us just 24 hours dock to dock and we had Moonshadow tidied up by happy hour, where we celebrated a quick and uneventful maiden voyage of the 2010 the cruising season. 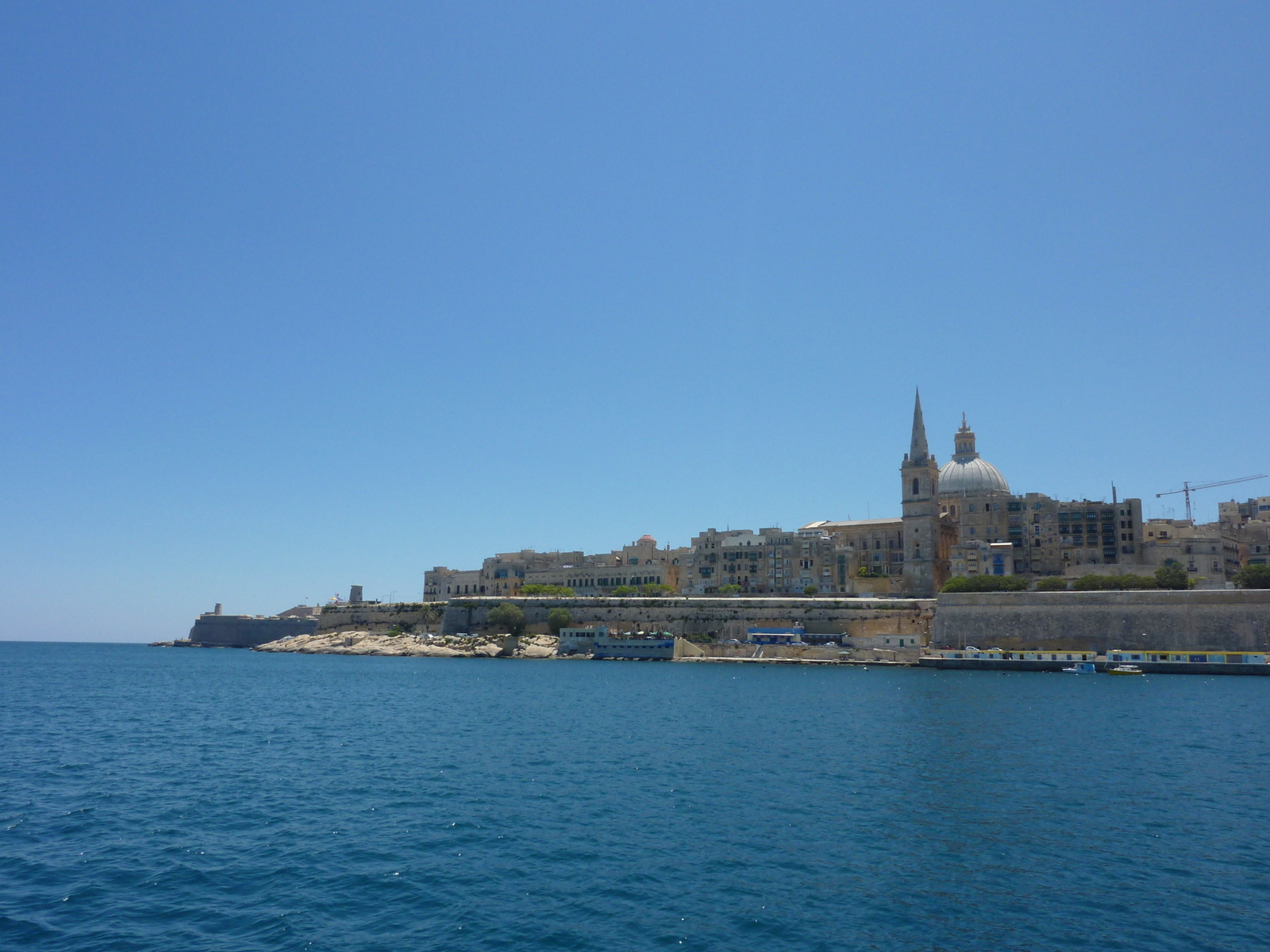 The view of Valetta as we entered Marsamxett Harbour

Manoel Island is attached to the mainland by a short bridge.To the left is the working class suburb of Gzira and to the right to the fashionable suburb of Sliema, with its long waterfront promenade lined with tourist hotels, shops, bars and cafes.

Check-in formalities to Malta were facilitated by the friendly and efficient marina manager.A phone call was made, an official showed up within a few minutes, and after scribbling my signature on a declaration that we had no live animals on board, we were officially checked into Malta.We weren’t even asked for our passports or ship’s papers.It doesn’t get much easier than in the European Union.

Due to its strategic location in the geographical center of the Mediterranean, Malta has long been a center for boat building and repair.Gzira clearly caters to the boaties.Wandering just few blocks of the marina, we found at least half a dozen reasonably stocked chandleries.There was also a full service dive shop where we arranged for our SCUBA tanks to be collected for inspection.For provisioning, we found a good supermarket, a wholesale beverage distributor that sells to the public, and an excellent market selling good quality frozen meats, fish and vegetables.All three of these businesses offer free delivery to boats placing a reasonable minimum order.This is a very attractive service to those of us who don’t bring a car with us.

We have found the Maltese to be very friendly, helpful and unlike their European neighbors to the north, they charge very reasonable prices for goods and services.In addition to the local language, Maltese (a potpourri of Arabic, French, Italian, Yiddish and a few other tongues), virtually everyone speaks fluent English owing to the fact that Malta is a member of the Commonwealth.A couple other leftovers from Malta’s stint as a British colony are driving to the left side of the road and a fleet of British buses dating back to the 1950’s. Most of these are kept in pristine condition by their proud owner/operators, and the public transport system in Malta is cheap and excellent. 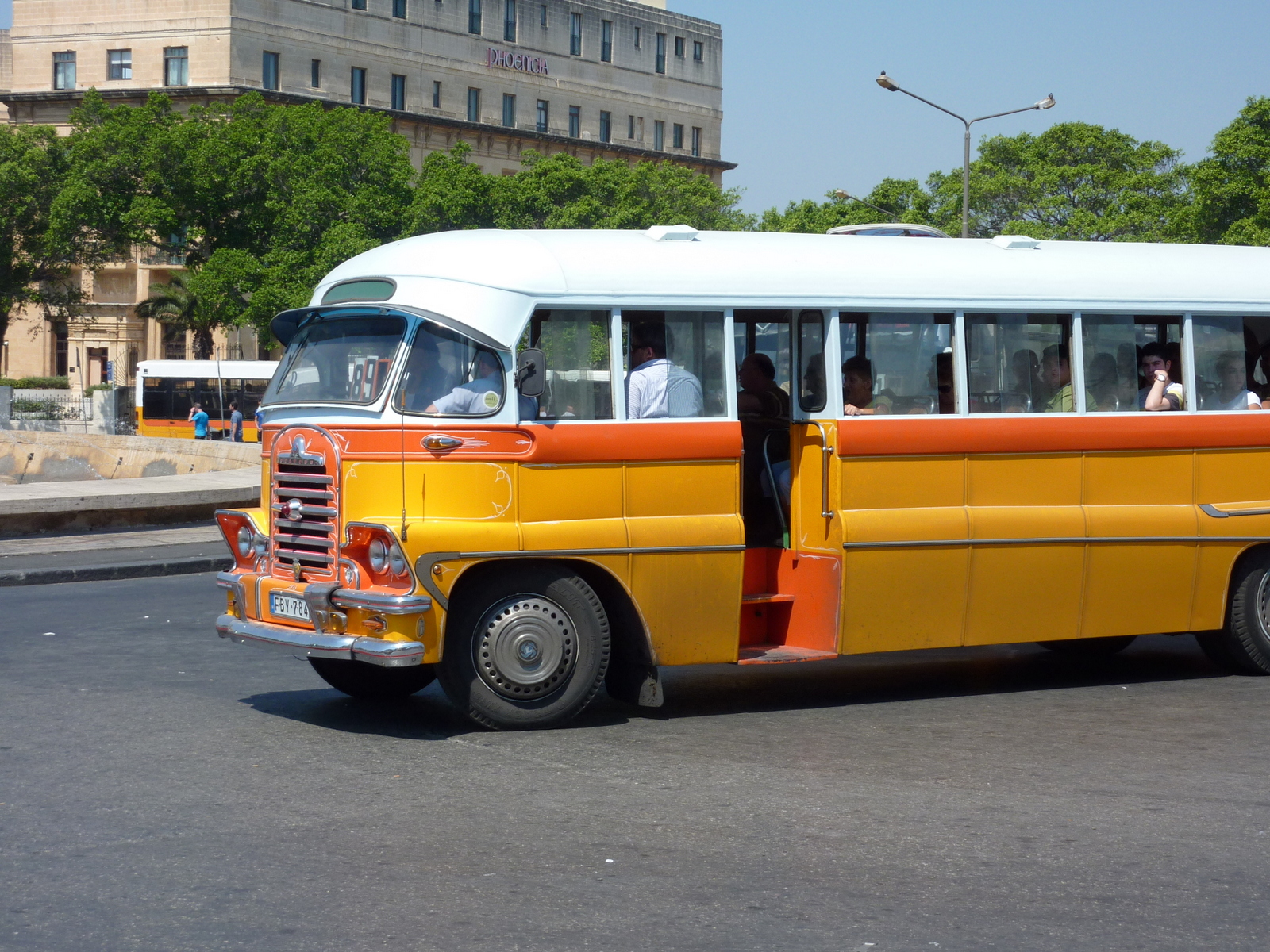 Within a few days, we had jacked up all the jobs that we intended to accomplish this season in preparation for the ARC Transatlantic Rally we’ve signed up for this November.A bottom job, a new dodger cover, life raft inspection, out-of-the-water insurance survey, renewing flares and fire extinguishers were just a few items on our extensive “to do” and “to get” lists. As any cruiser knows that as starting one job invariably exposes others that need to be done.In our experience Malta is the best place in the Med to get it all sorted, which is why many owners base their yachts here and cruisers winter over while getting work done.We wish we could have done the same, but all the marinas were full last winter and wouldn’t accept any more bookings.

By far our biggest job each year or two is the haul out.We chose the Manoel Island Yacht Yard based upon other yachties’ recommendations and its proximity to chandleries and alternative accommodation while Moonshadow was hauled.Life is just too hard when you’re living on the hard without refrigeration, showers or toilets.The yard is a short walk across Manoel Island from the Marina and overall the logistics worked very well for us.

We were the first yacht to be lifted out of the water under the new private ownership of the yard.I’m not sure if this was typical Maltese service or if the yard wanted to create a good first impression, but we had one of the best haul-outs in my 16 years as Moonshadow’s care taker.Rarely have we had a haul out that was done well, done on time, and done on budget.We usually have to settle for two out of three.

As scheduled, we lifted out at 0830 on Monday morning.Yard staff had clearly been briefed on all the jobs that were to be done.A fork lift arrived shortly after to take away the anchor and chain to be re-galvanized.He was back soon after to take away the life raft for inspection and re packing.Water blasting and wet sanding started soon after the stands were set.The only snafu was that the keel needed to be sand blasted down to bare stainless and epoxied before the antifouling paint could be applied.This happened the next morning, but there was still time during the week to allow correct drying time between coats of epoxy and anti-fouling.Clear skies meant that work carried on every day, even if it was stifling hot in the yard. 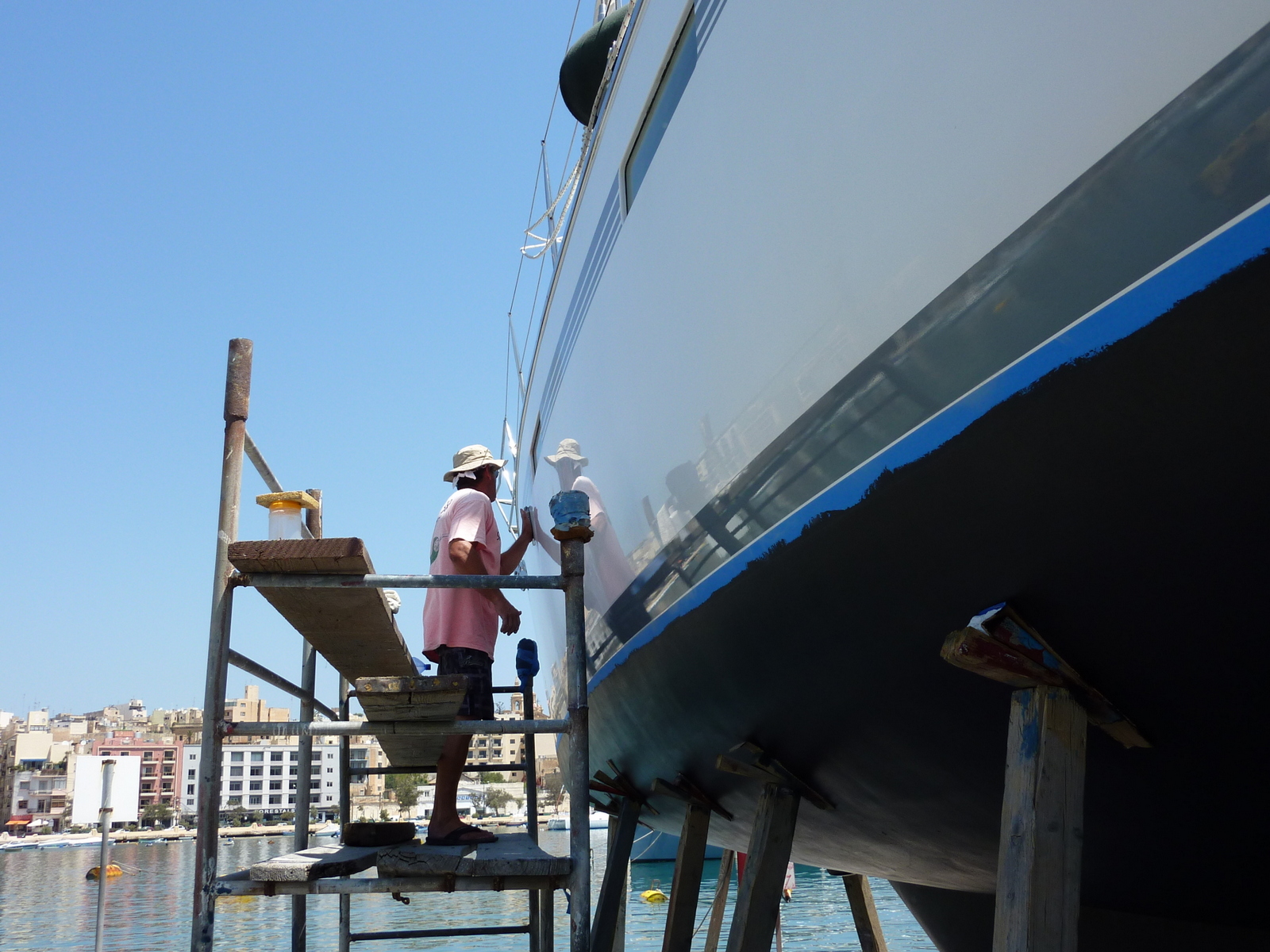 Hot and sweaty work, even on the shady side of the boat

Merima and I worked frantically in the mid 30’s C/mid 90’s F heat to cut and polish the topsides and accomplish a plethora of our own usual haul out jobs before re-launching, while re-hydrating ourselves with the thawing water from large supply of 2 liter bottles that we had filled the freezer with the week before.The frozen bottles helped keep the freezer cool enough to save our perishables as the fridge warmed up. Virtually all the work on our list was completed by lunch time Friday. 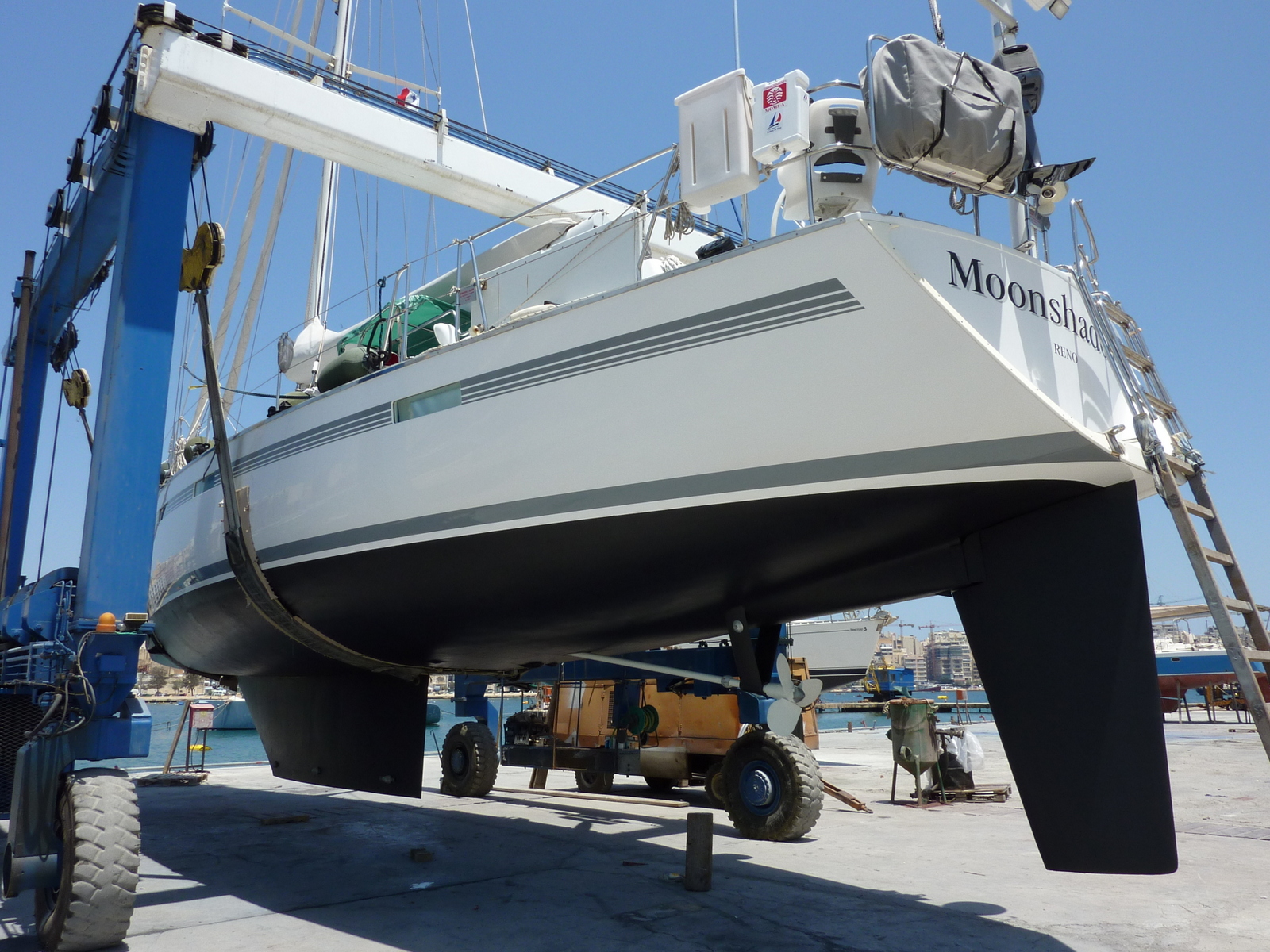 All the workers were friendly, professional and appeared to take pride in their work. Most had worked in yards for decades.The price was fair and the quality of work was typical of first-world standards.We splashed after lunch on Friday and motored around Manoel Island back to the marina.The yard was kept very clean and Moonshadow was no dirtier after five days in the yard than she was after a day or two in the marina at Monastir.We had her cleaned up in time for a well deserved Friday evening happy hour.

The only issue we had with the yard is the rather small travel lift and lifting pen.Theirs was the smallest 50 tonner we had ever seen.Even though she weighs in at 25 tons, Moonshadow maxed out both with her length, even with the travel lift as far out on the fingers as it would go and the lifting straps fully spread fore and aft they barely straddled our long keel, and three of us had to push the stern to keep the rudder from hitting the end of the pen.Fortunately, Manoel Island Yacht Yard has numerous slipways for larger yachts, and I read in a local newspaper that the consortium who now owns the yard plan to spend €6 million to upgrade the facility. 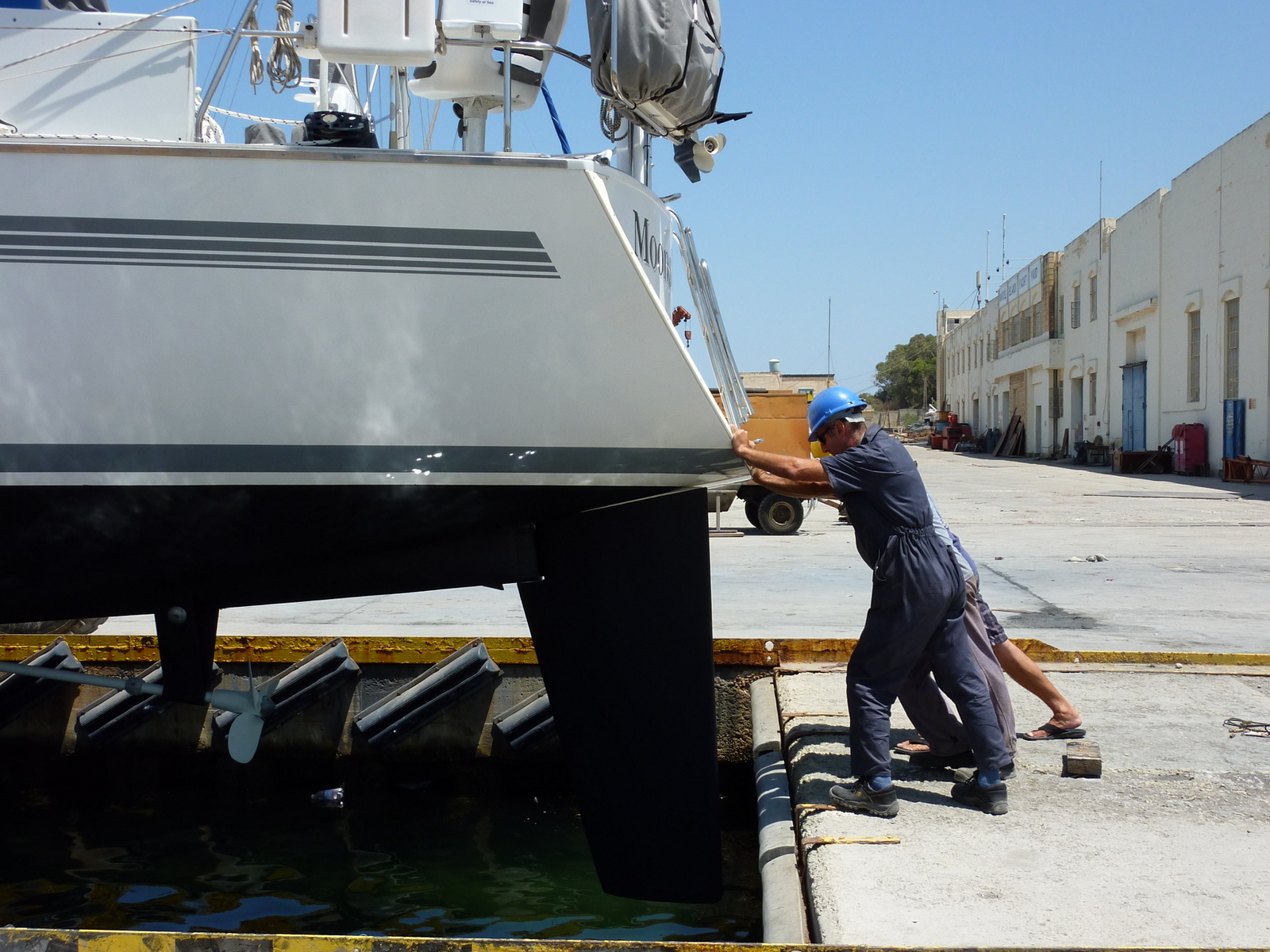 The travel lift pen was just a bit short

Our first two weeks in Malta have consisted mostly of work and very little play.We took a day off, hopped on a ferry from Sliema and spent a delightful afternoon sightseeing in the old walled city of Valletta, a World Heritage Foundation listed site.With everything closed on Sundays, and the narrow streets devoid of traffic, we’ve also taken these afternoons off to explore some of the neighborhoods and along the long, scenic Sliema promenade by bicycle. 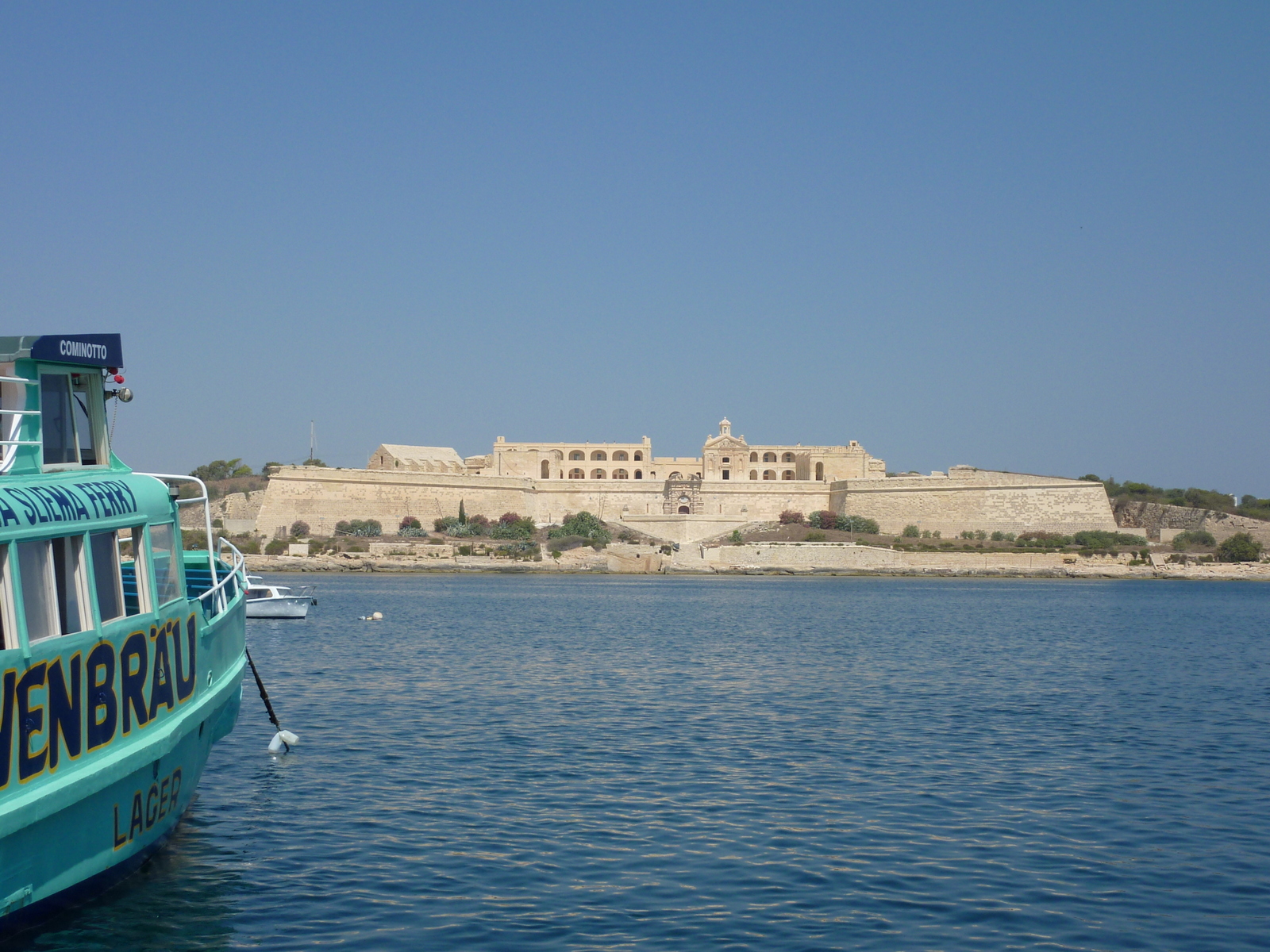 Traditional Maltese food is unique and hearty fare.We’ve enjoyed a few meals out and found both the food and locally produced wine to be excellent and very reasonably priced.Very enjoyable Maltese wines can be purchased in the supermarkets for €3 to €10.At one Maltese restaurant we were offered a locally made liqueur called Madlein, an herbaceous concoction made from the fruit of the prickly pear cactus. 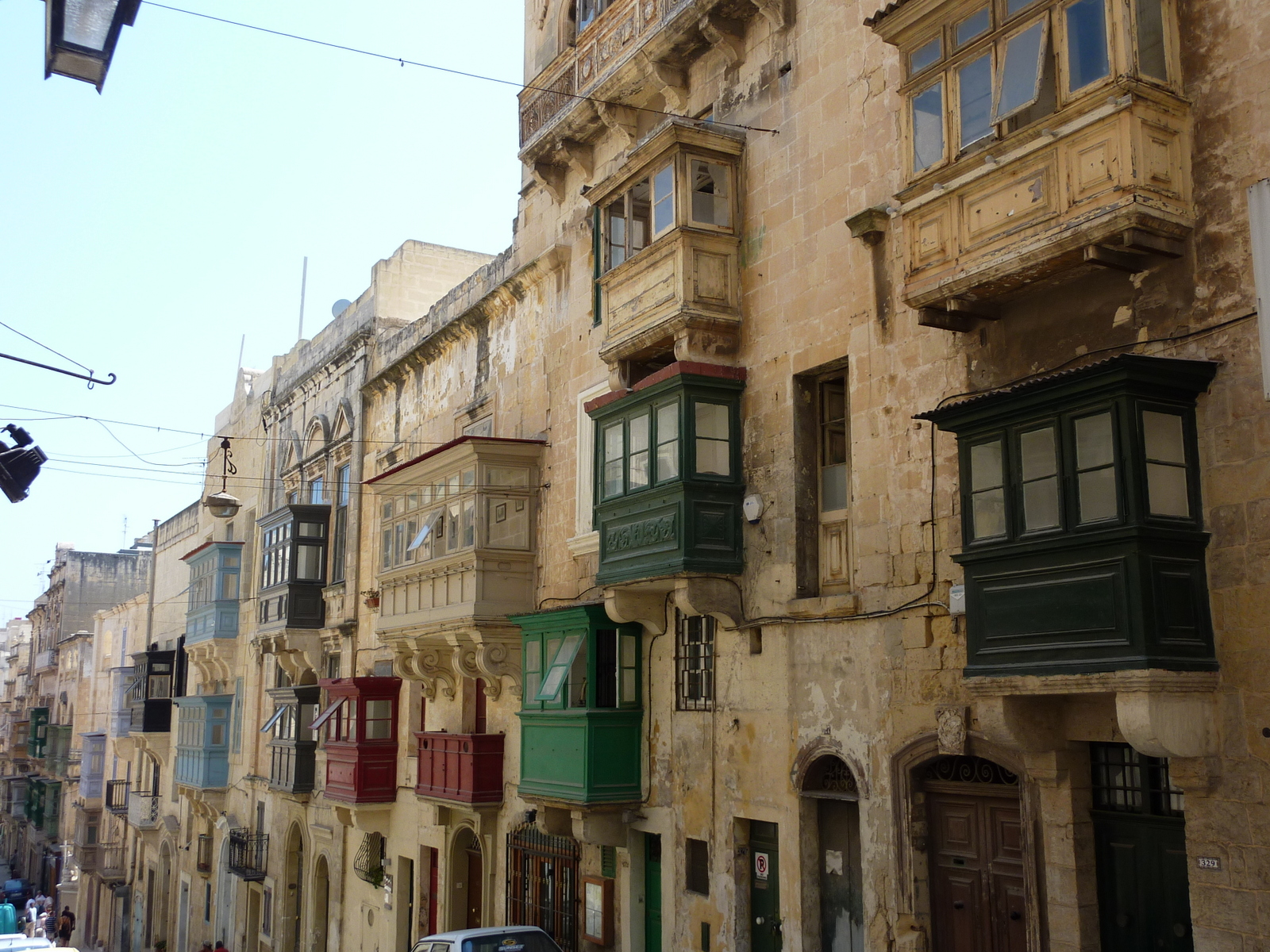 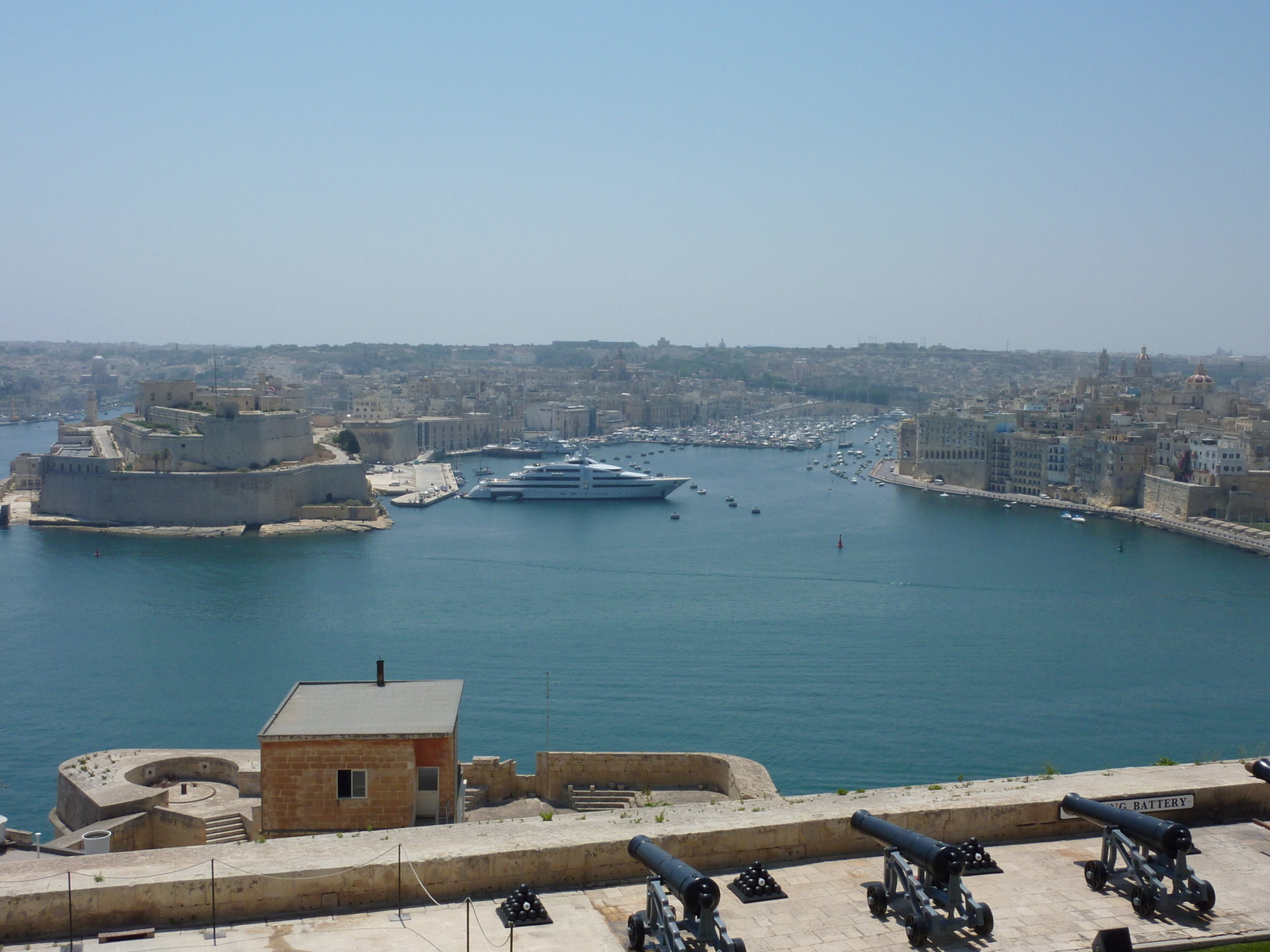 View of the spectacular Grand Harbour Marina from Valetta 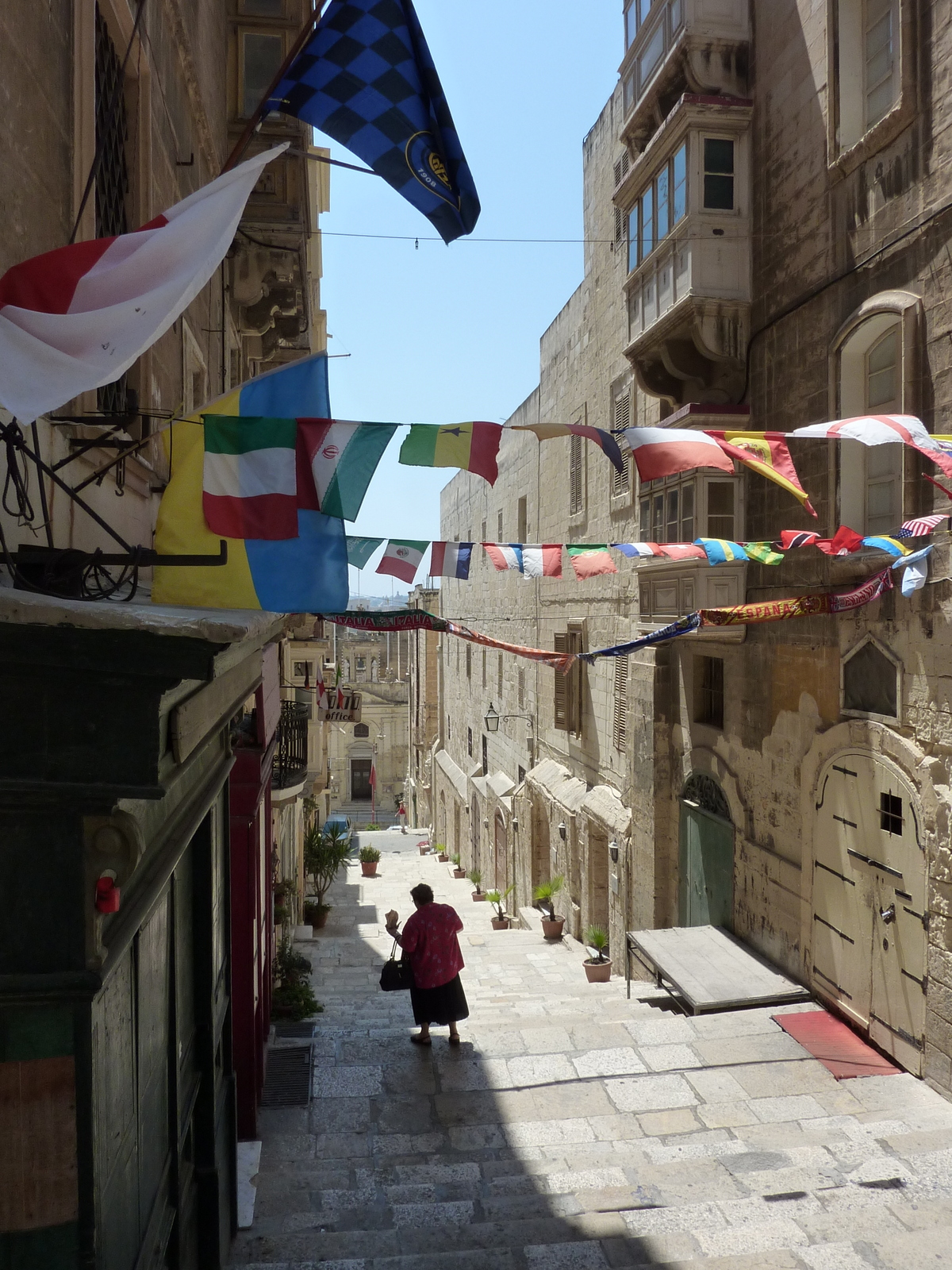 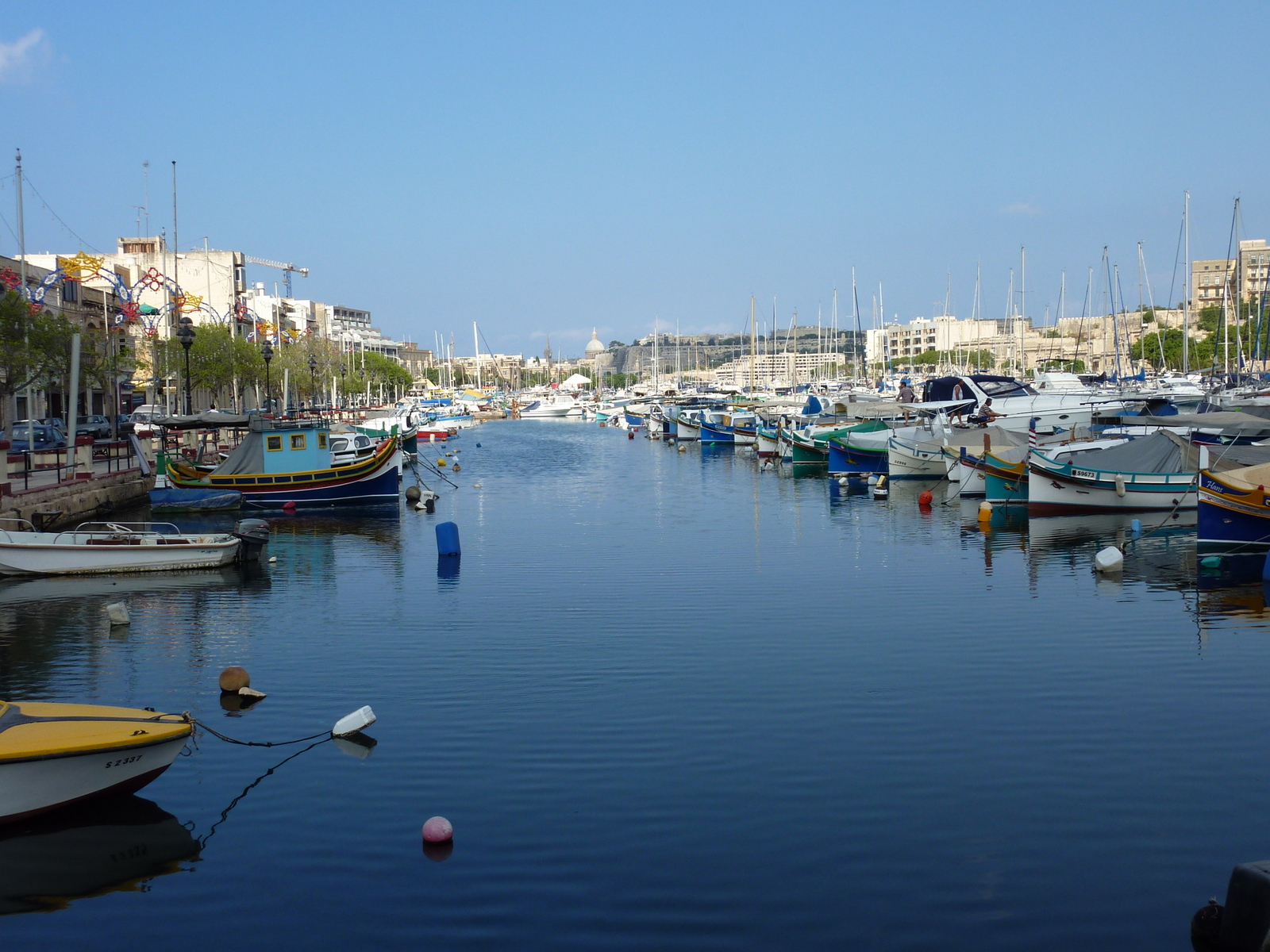 High-bowed luzzus, the Maltese style fishing boats, compete for space with pleasure craft in the harbor at Msida

Most of our jobs for the season are done, and we’re now waiting for the dodger cover to be completed, so we plan to get out and see a bit more of this lovely country before we start heading west.