Finike, Turkey to the Isle of Karpathos, Greece

After a wonderful eight-month summer in New Zealand, we’re once again cruising on Moonshadow. We’re back in the Greek Isles and happy to be exploring some new and interesting cruising waters.

I’ll hit the rewind button for a minute or so to let you know what we’ve been up to since our last SetSail report.

We left Moonshadow on the hard in the southern Turkish town of Finike for the northern winter and flew to New Zealand for the southern summer. Her bottom was stripped to bare glass for the first time in her 22-year life and she had seven months to thoroughly dry out. Just before we returned to her, she had a new epoxy barrier system applied.

Our summer wasn’t exactly a vacation. Merima got a contract working for her previous employer for seven months and was happy to use and develop her career skills and catch up with former colleagues. George completed the first draft (130,000 words-yikes!) of a book covering the 50-year history of the Stewart 34, a New Zealand class racing/cruising yacht on which he’s been racing for the past ten years and that was instrumental in the development of New Zealand as a pre-eminent yacht racing nation.

We returned to Finike in early June armed with a large suitcase full of replacement parts and boat supplies, and spent ten long, hot days getting Moonshadow back in shape and ready to re-launch. Other than lots of dust from an African storm, she was in good nik. Moonshadow was parked right next to a row of workshops on the edge of the yard, so the workers set a plastic table in the shade of her hull and enjoyed cay (tea) and karpus (watermelon) during their regular breaks. Always gracious, we were invited to join whenever we were in sight.

Finike is a quiet little agricultural and fishing town popular with cruisers as a place to winter over. It doesn’t even appear in the tour guides since it’s off the tourist’s radar screens, prices are low and the Turkish culture level is high. We enjoyed our time there, but as soon as we could get Moonshadow back in the water and put in some provisions, we were anxious to set off on another season of cruising.

We started out by backtracking our way up the Turkish coast. A few days later we were joined in the town of Ka by our Stewart 34 sailing mate Charles, who took a week off from his English narrow boat to spend a week sailing with us as we worked our way up the Lycian Coast to Marmaris. The winds were mainly light, causing us to burn lots of that semiprecious commodity called diesel, but we did catch a few late season southerlies to get in some sailing before the northerlies of the Meltemi filled in. We were happy we topped up with fuel last season before we left when diesel was only US $6 a gallon-now its up to $9 a gallon!  After a few more days of work in the yachting-friendly town of Marmaris we declared that Moonshadow was fully ship-shape, so we checked out of Turkey and headed west to the Greek Isles to begin exploring some new waters.

Our first day’s run was a leisurely 37-mile hop over to the lovely island of Sými.  We arrived early and found plenty of space to Med-moor to the town quay.  Check-in involved three stops-Immigration, Customs and the Port Police.  All three offices are within easy walking distance and the Greek officials were all courteous and helpful.  I parted with €30 and started a new Greek Transit Log.  We spent a couple of days chilling out in the quaint village atmosphere and stocking up on some of our favorite Greek foods and wines such as frozen octopus and Cair Brut sparkling wine.

We continued southwest to the quiet little island of Khálki.  As we ventured further into the Aegean, we began to experience the full force of the Meltemi, which blows strongest in July and August from the north to northwest.  Fortunately, it calmed a bit that evening and we were able to head ashore for a nice meal which included Khálki’s trademark sourdough bread, which is reminiscent of its world-famous counterpart from San Francisco.

We departed Khálki early in the morning and as soon as we rounded the eastern point of the island we had a 15 knot breeze from the northwest.  We enjoyed a beautiful sail with the wind just abaft the beam and the seas relatively calm.   The winds built throughout the morning to about 23 knots and we were gliding along on our new bottom easily averaging 9-10 knots, making the 47-mile trip southwest to the island of Kárpathos by lunch time.

Kárpathos is a wind-blown little island well off the bareboat charter circuit.  When we arrived there was only one other foreign yacht in the harbor and the town quay was deserted except for a single dormant day-tripper boat.  The Port Policeman told us they only see about two or three visiting cruising yachts a week.  In fact, most tourists arrive by air, so the arrival of a yacht is somewhat of an event in this quiet little town and many locals come down to the quay to have a squiz during their daily stroll.

A number of Karpathians have returned home after living overseas in the States and Australia.  A few of them saw the Stars and Stripes flying on the stern came by to have a chat.  One was an old fisherman named Nick.  Nick was a merchant marine who hated the working conditions and jumped ship in the States. He ended up in the restaurant business, staying for 20 years.  He is happy to be back in the laid-back atmosphere of Kárpathos where he can go fishing when he wants.  His commute is about 50 meters and he doesn’t even want to own a car.  When he’s not fishing, he’s chatting with all his mates over coffee on one of the many waterfront cafes.  Nick was a wealth of information for us and we enjoyed his wry sense of humor.

On a stroll around town we passed by a convivial little restaurant called Mike’s.  Manoulis, the owner, convinced us to come back for dinner.  That night he seemed to take a particular interest in us, coming by to chat and giving us a second carafe of wine and after-dinner drinks on the house.  He even invited us to lunch at his house the following day which we unfortunately were unable to make.  Our dinner of Karpathian specialties was excellent and the atmosphere, a bougainvillea lined, cobblestone walking street, was magical.

After a couple days Med-moored to the town quay, the Meltemi had set up a pretty uncomfortable swell, so we shifted Moonshadow over to the new small boat marina where a space had come available.  It was very calm in there and still just a short walk to town.  The marina had fancy pylons with outlets and meters for power and water, but TIG (This is Greece!) so none of it worked excepting the tap for the Hellenic Coast Guard’s patrol boat.

We hired a car so we could visit some of the remote villages spread around the island.  There was a very efficient rental outfit just up from the marina where we found a cheap little car.  Interestingly, they kept my driver’s licence as security for the car.  I’m not sure where they think I was going to go with it.

We had a delightful day making a big circle of the southern part of Kárpathos, visiting quaint hillside and seaside villages, old churches and crumbling old stone windmills.  The roads on the island were steep and narrow and once we climbed away from sea level, we were alternating between first and second gear most of the time.  Many of the older village homes are built right smack on the edge of the road.  One would have to look both ways before stepping out the door taking three steps would land one in the middle of the street.  Many of the Greek elders pass their days sitting on chairs outside their front door, sipping coffee, chatting with friends and watching the passers-by.  While there are a number of lovely modern homes in the hills overlooking the sea, many of the village homes date back more than a hundred years.  Kárpathos doesn’t attract much rain, so the primary crop is olives.  According to Manoulis, there is one iconic tree on the island that is more than 2000 years old and still producing. 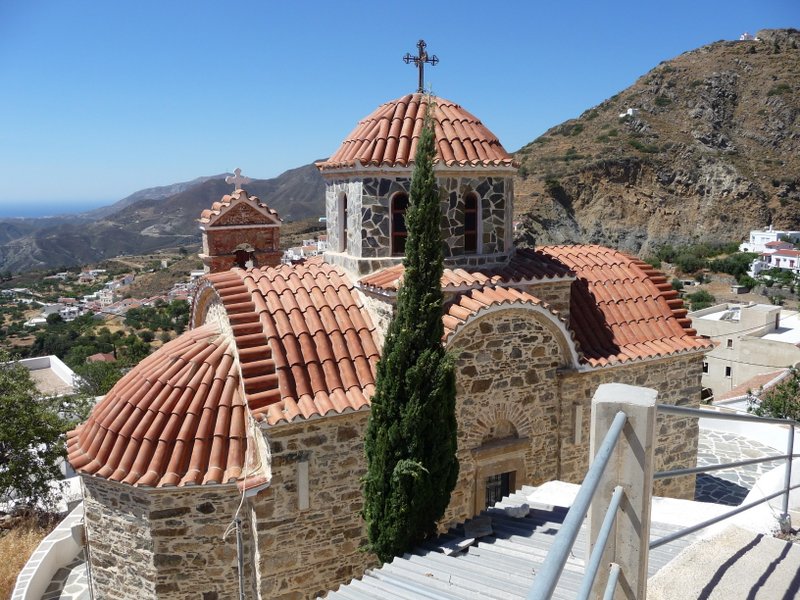 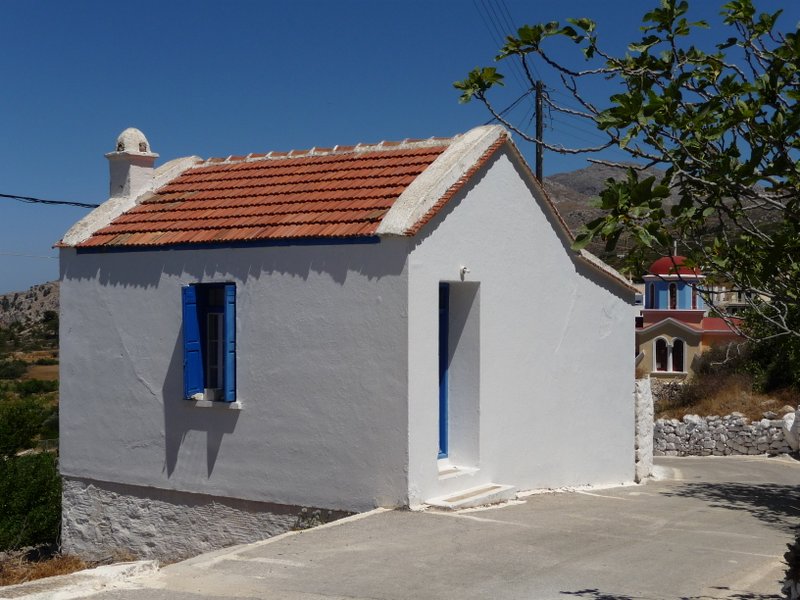 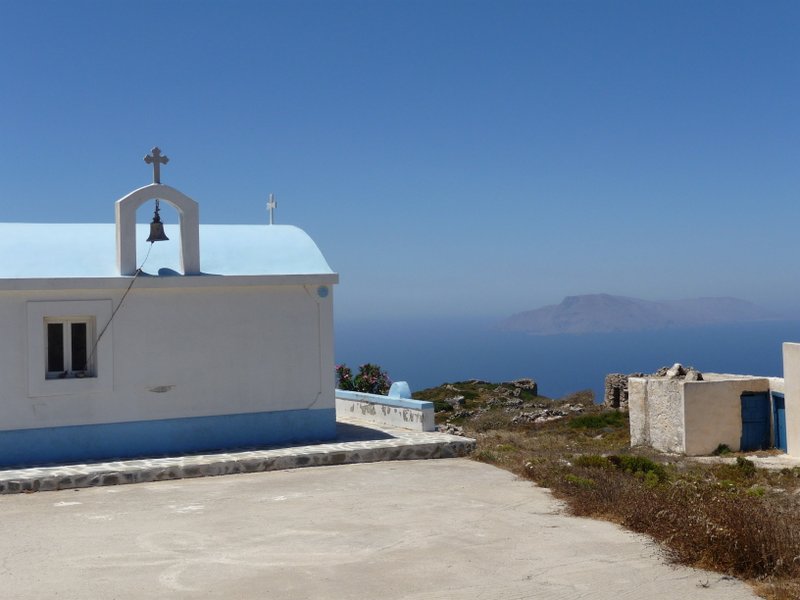 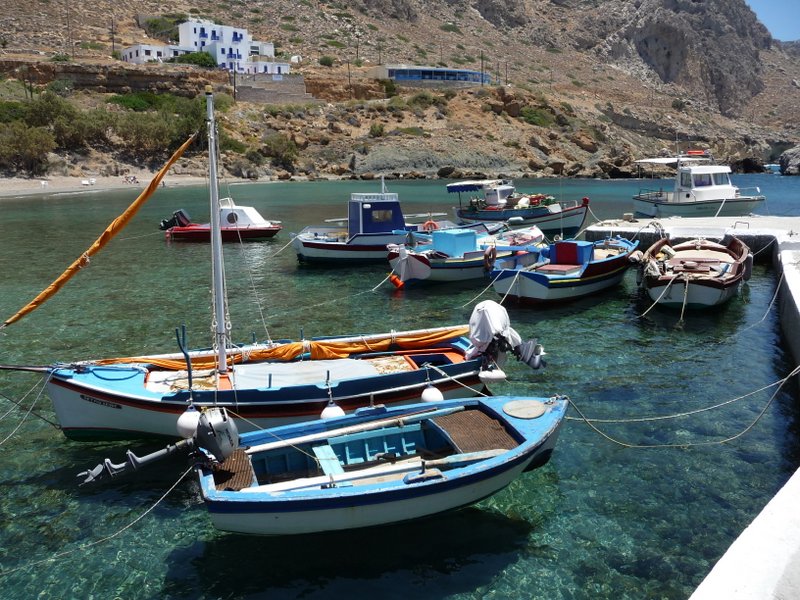 The southern tip of Kárpathos is a board sailor’s heaven.  In the summer, the Meltemi blows off the land nearly every day at a steady 20-30 knots, making for some very fast sailing on flat water.    There were plenty of vacationing adrenaline junkies taking advantage of the perfect conditions of the day, and wannabees taking lessons at the local school. 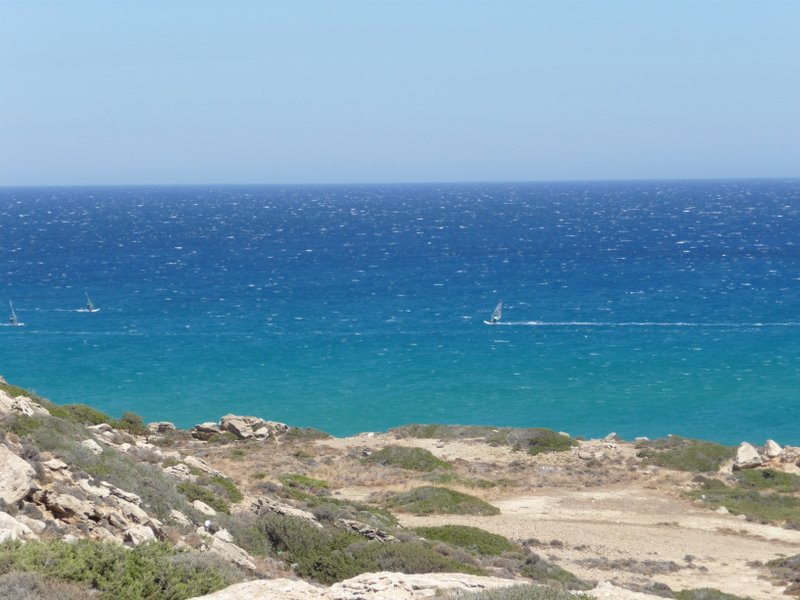 Windsurfing off the south end of Karpathos

We enjoyed one more meal at Mike’s before departing Kárpathos.   Manoulis gave us a take-away tray of his mother’s world-famous-in-Kárpathos baklava as a gift for the boat.  On the way home we ran into Nick who gave us some local advice on anchorages where we could take cover on the way to Crete.

We tossed off the lines the next morning and headed for the little anchorage Nick the fisherman had told us about on the south end of the island of Kásos.   Winds were light in the harbor, but by the time we reached the south end of Kárpathos where the windsurfers were hard at play, it was 25 knots gusting over 30.  Seas in the channel between the islands were snotty, and by the time we reached the snug little anchorage at Khelatronas, we were happy to have some shelter from the seas.   Bullets came through the anchorage all night at 30 knots +, but holding was good on the uncharted 8 meter sand shelf and we rested up for the next leg of the trip to Crete, where George planned to search his family roots.

This entry was posted in All Cruising Logs, Greece, Mediterranean Logs, Turkey. Bookmark the permalink.