Brindisi and the Boot of Italy

Fourteen hours after departing the charming village of Cavtat on the southern coast of Croatia, we arrived in Brindisi, Italy, 118 miles to the south on the opposite coast of the Adriatic Sea.  The seas were flat calm all of the way, and the winds were mostly less than five knots.  For a short time they got up above ten knots and we actually set sails and turned off the engine, but it was a short-lived teaser.  For the second time, we dragged our fishing lure all the way across the Adriatic and caught nothing.  Fishing in the Med sucks!

Situated on the heel of “the Boot” of Italy in the southern region of Puglia, Brindisi has long been a gateway to destinations to the east.  For us it was our second visit and it felt as comfortable as a well-worn shoe.  We tied up alongside the lengthy quay near the broad stairway that was once the terminus of the Via Apia or Appian Way, the ancient road to Rome.  We even managed to get a spot in reach of the lone fresh water standpipe, giving us the opportunity to wash down Moonshadow, do a load of wash and top up our tanks.  A couple of days later we were politely informed by a representative from a local yacht agency that this particular stretch of quay was “private” and there would be a charge to stay.  The only difference between the private area and the free public quay was a row of potted plants between the boats and the public walkway.  We didn’t feel that bit of luxury was worth €45 per day so we shifted down the quay 100 meters or so. 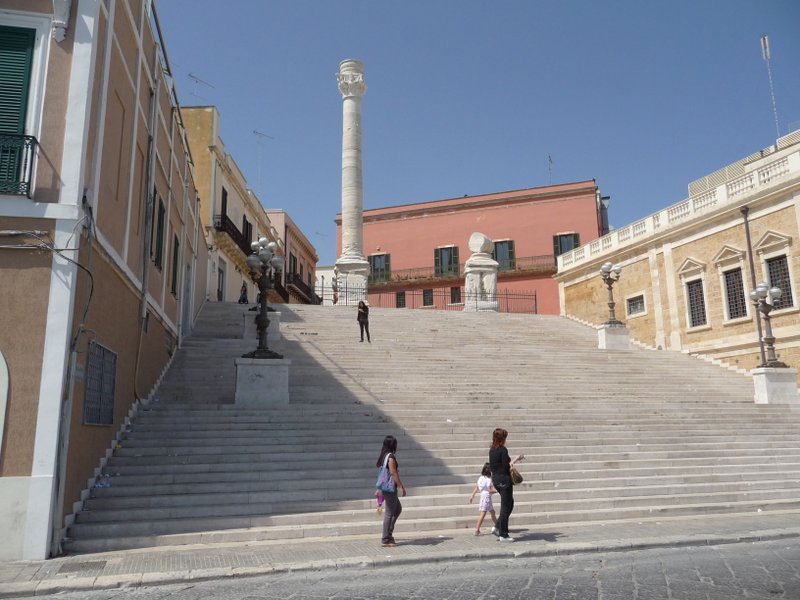 The steps at the terminus of the Via Apia, Brindisi

Check-in formalities were made easy by the fact that Merima could speak Italian to the authorities, and the friendly Polizia Frontera officers insisted we should not bother to check in with Customs.  They did want to come and sight the boat, but were shy when we invited them aboard.  They wouldn’t even go below when invited.  They said they wanted to be satisfied that we were not smuggling refugees from Africa or drugs from Asia but I think they were just enjoying having a chat on what would have otherwise been a quiet day at the office.

Brindisi is a busy port city teeming with ferries that connect to Croatia, Albania, Greece, Turkey and Malta and as such is not the most attractive of Italian cities.  What it lacks in beauty it makes up for with its great vibe.  The picturesque old town is a maze of narrow streets paved in marble and granite cobbles, lined with lovely centuries-old buildings.  It is bisected by a handsome boulevard called Corso Garibaldi, which is lined with palm trees, cafes and rather nice boutiques.  With an excellent supermarket near the port end, it is very user friendly for cruisers wishing to provision. 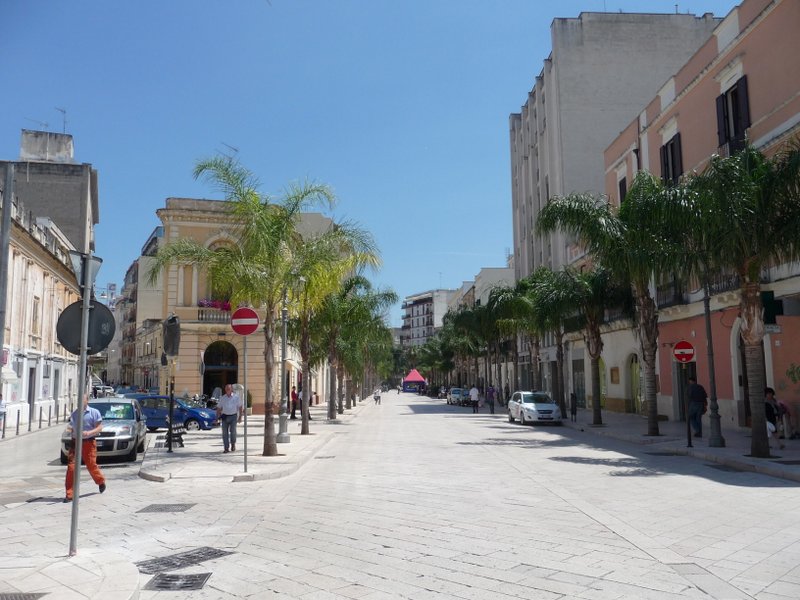 Every evening at dusk the townspeople came out in droves for their evening passeggiata or stroll.   Fashionably-dressed singles, couples, families and friends have a walk, a chat and perhaps a gelato.  One of the best gelaterias in town, Betty’s, was temptingly close to us, offering up more flavors than Baskin and Robbins by smartly uniformed soda jerks who serve up a plethora of tempting dessert specialties.  We were in prime position for people watching and couldn’t help but notice the locals wearing a lot of purple garb-shirts, dresses, sweaters, pants, shoes and even hats and handbags.  Apparently purple is the new black this year-at least in Italy.  Remember where you read it first! 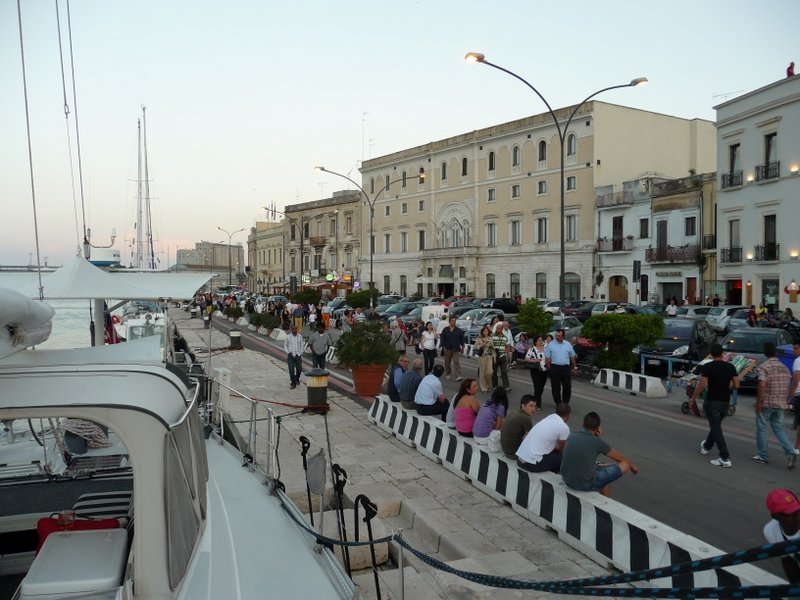 The evening passegiata along the quay, Brindisi 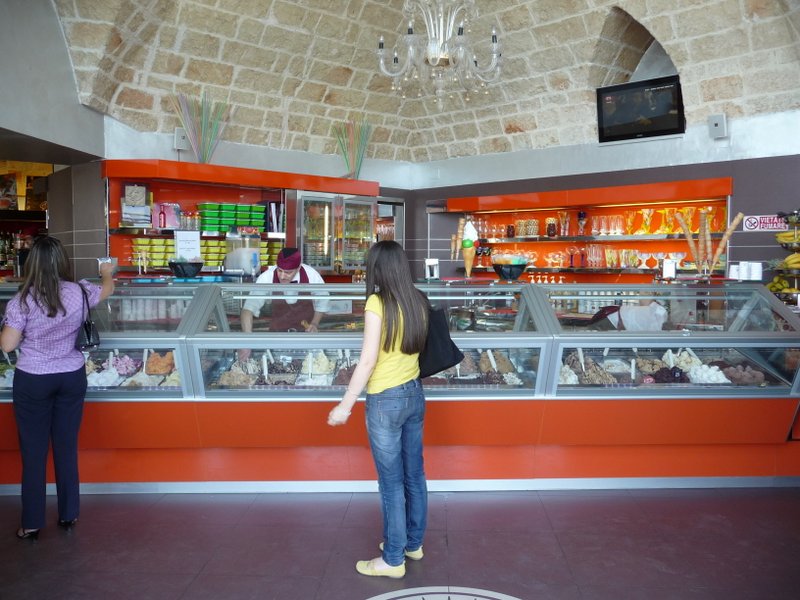 One of our favorite things about Brindisi is that everyone with whom we came in contact was friendly, warm and helpful.  We went to a trattoria called La Locanda del Porto where we had enjoyed an excellent meal when we came through last September.  The proprietor remembered us and we had another excellent meal with a bottle of local Brindisi wine called Negro Amaro.  The smoked swordfish carpaccio was to die for!  A few days later we returned to another trattoria.  Again the proprietor remembered us and recommended an excellent local wine called Primitivo to accompany the excellent pizza.

Brindisi still follows the tradition of closing each afternoon for “siesta” at 1:00.  Shops reopen at 4:30 and close for the evening at 8:00.   Virtually all shops are closed on Sundays and holidays except ones in the two large shopping malls situated out on the highway between Brindisi and Taranto.

Getting out to the malls is no easy mission as we discovered last season.  It involves long waits for buses and in one case, doing the last mile or so on foot.  Taxis cost a fortune so in order to facilitate some serious provisioning at the Carrefour Mega Store and a minor wardrobe update, we hired a fix-it-again-Tony (Fiat) for the day and packed it to the headliner with groceries, Italian wine and summer attire.  Driving was fairly easy but the signage is confusing, if not completely wrong.  Leaving the mall, we followed the signs to get us back to Brindisi and only to make two complete laps around the parking lot arriving back where we started.  We decided to go in the opposite direction indicated on the sign and this of course took us straight to the highway heading to Brindisi.

One evening at about sunset, a pair of buskers set up an electric piano, violin and a pedestal with a white rabbit on the quay just outside of Moonshadow.  The music was nice for awhile, but after an hour it became apparent that their repertoire was a bit thin.  After the fourth or fifth off-key round of “Feelings” it became torturous and we had to escape for a stroll and a gelato.  I’m not sure what the rabbit was for, but the kids all seemed to want to come up and pet it. 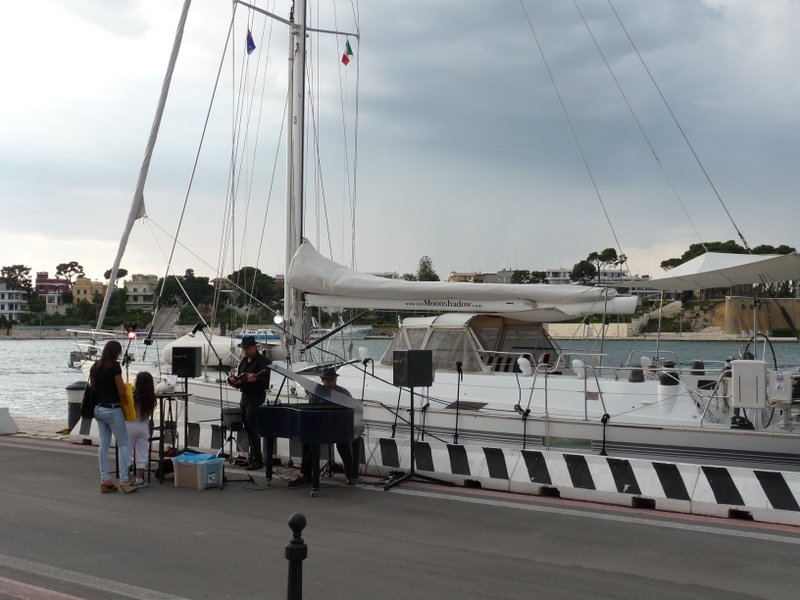 Music on the quay

The grib files were forecasting light northerlies, so after a relaxing week in Brindisi it was a good opportunity to start making our way south towards Sicily.  Conditions were calm so we motored all the way to Santa Maria di Leuca on the tip of the heel.  There is no suitable anchorage or public quay anywhere along this coast so we had to go into the marina.  I’m sure the marina owners are acutely aware of this fact as they charged us €111 for one night.  We took advantage of the water tap and gave the boat a bath and did a load of wash before sunset.

We tossed off the lines early the following morning and made our way across the Gulf of Taranto to Capo Rizzuto where we found reasonable anchorage in a cove behind the cape that is designated as a marine reserve.  We’re not quite sure what they are protecting, as the sea bottom was little more than weed and rubble, and there was not a single fish to be seen.  At least the water was cool and clear and great for swimming.

The next day we carried on to the sole of the boot and a town called Rocella Ionica.  It is a beach resort town with a small castle on the hill as a backdrop.  Conditions were so calm that we were able to comfortably anchor off the beautiful sand beach near the marina.  We were fortunate as some of the arriving yachts were having difficulty making it into entrance to the marina due to heavy silting.  Pressing on the following morning we set out in flat calm water and no wind.  Within a half hour the wind had piped up to the mid twenties gusting into the low thirties-something we hadn’t experienced since our time in the Aegean Sea.   We had a romping good reach hitting 10 knots at times but the wind gradually died out after an hour and we were back to burning more dinosaur juice.

As we approached the Strait of Messina, the narrow patch of water between mainland Italy and the island of Sicily, we came upon one of the fishing boats specially rigged up for catching the swordfish migrating through the Strait. It was a thirty-something foot long fishing boat with a four-to-five storey tower in the middle and a prow extending at least 50 feet out from her bow.   There were two men in the tower looking for swordfish basking on the surface, while seated on the end of the long prow was a man with a spear gun.  Apparently when a fish is spotted, they would quietly sneak up behind it and the man up forward would harpoon the fish.  We don’t know whether or not they had any success, but we dragged a lure all the way across the Strait of Messina without getting a nibble.

We arrived in the splendid old city of Siracusa (Syracuse) on the island of Sicily just in time for sundowners and dropped the hook in the large and well-protected Grand Harbour. 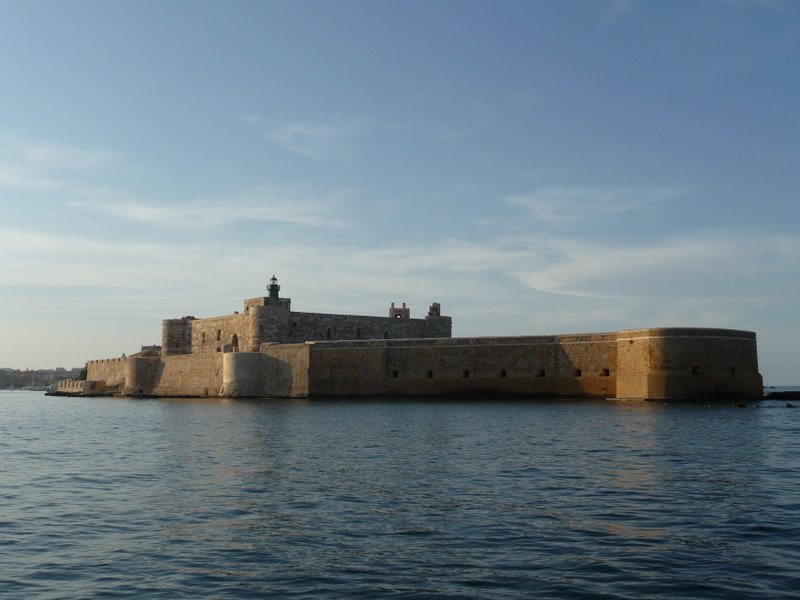