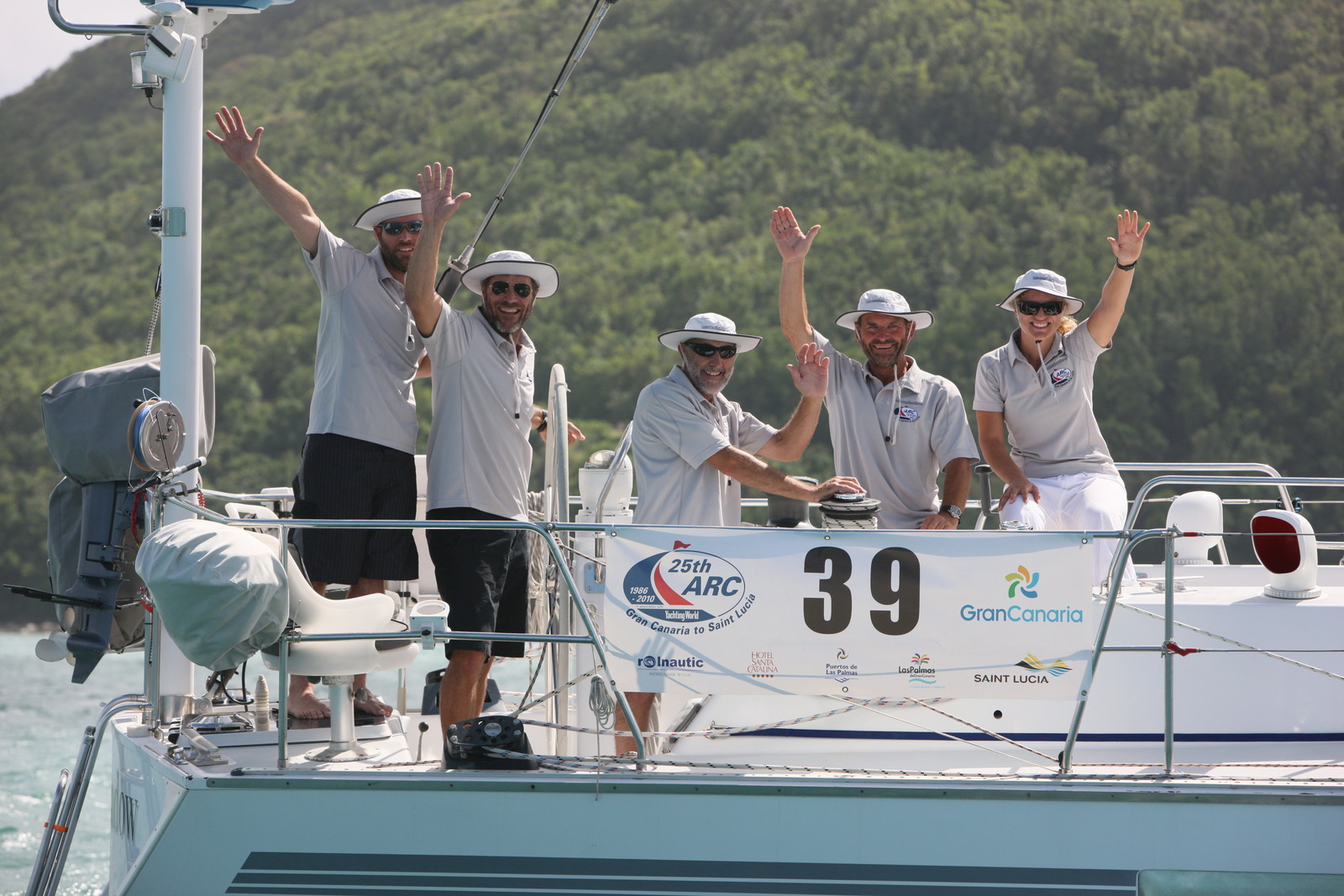 Moonshadow finished the ARC Rally today at 1251 St. Lucia time today and is safely in the marina.  She was the 19th yacht to cross the finish line out of 233 yachts that started the rally in Las Palmas.  More on our last day at sea tomorrow, but for now we’re resting up for the party tonight.

With the trade winds shifting north and south of the rhumb line all day and evening, we were gybing our way down the line to stay on course to St. Lucia.  The squalls that usually haunted us in the evening and early morning hours continued throughout the day. The good news is that they were usually nothing more than a spit of rain and an elevation of wind speed, so we didn’t bother taking down the kite as they approached.  The winds were up to 25 knot and down to 9 knots all day.
In the evening we were on a long port gybe, and had one squall with winds in the mid to high 20 knot range.  Smoking along at 11-15 knots, the bioluminescence from our wake lit up the very dark night.
By 0400 hours we were well south of the rhumb line and could see the glow of lights from the island of Barbados.  We gybed on to starboard and decided to go down to white sails as the wind was up and the sea state getting rougher as we approached the Lesser Antilleds chain.  By late morning we had gusts up to 35 knots and the seas were tossing us about like dice in a cup.
At 1050 land ho was called.  Charles was able to make out one of the mountains on St. Lucia through the clouds.  We celebrated the spotting of land with a wee dram of rum.
The long reach up the coast of St. Lucia in rough seas seemed like the longest stretch of the passage for us.  Now that we had made landfall, we couldn’t wait to get to the finish line.
We reached the north end of St. Lucia and gybed into the passage between it and Martinique, heading for Pigeon Island.   The ARC finish line people were called on the VHF so they could be ready for our arrival.
As we rounded Pigeon island into Rodney Bay on the leeward side of the island, the seas calmed, but we were hard on the 20+ knot winds.  Moonshadow heeled right over as we sheeted the sails on hard and bore down on the finish line.  A photographer in a RIB arrived to take photos of us-one hand on the outboard tiller and a big camera in the other.
We crossed the finish line at 1251 hours local time; 18 days, 3 hours and 51 minutes after we left Las Palmas, some 2800 miles to the northeast.
We arrived at our berth in the Rodney Bay Marina to the sound of a steel drum, big welcomes, pina coladas and beers, along with a basket of fresh fruit with a bottle of St. Lucian rum. The ARC rally staffer told us we were the 19th or 20th yacht to arrive (out of 240 entrants).
After things had settled a bit we enjoyed a lunch of fresh salad (lettuce bought 20 days ago) with champagne to celebrate.
The MooCrew were looking forward to a much deserved drink and dinner ashore this evening and an uninterrupted night’s sleep. 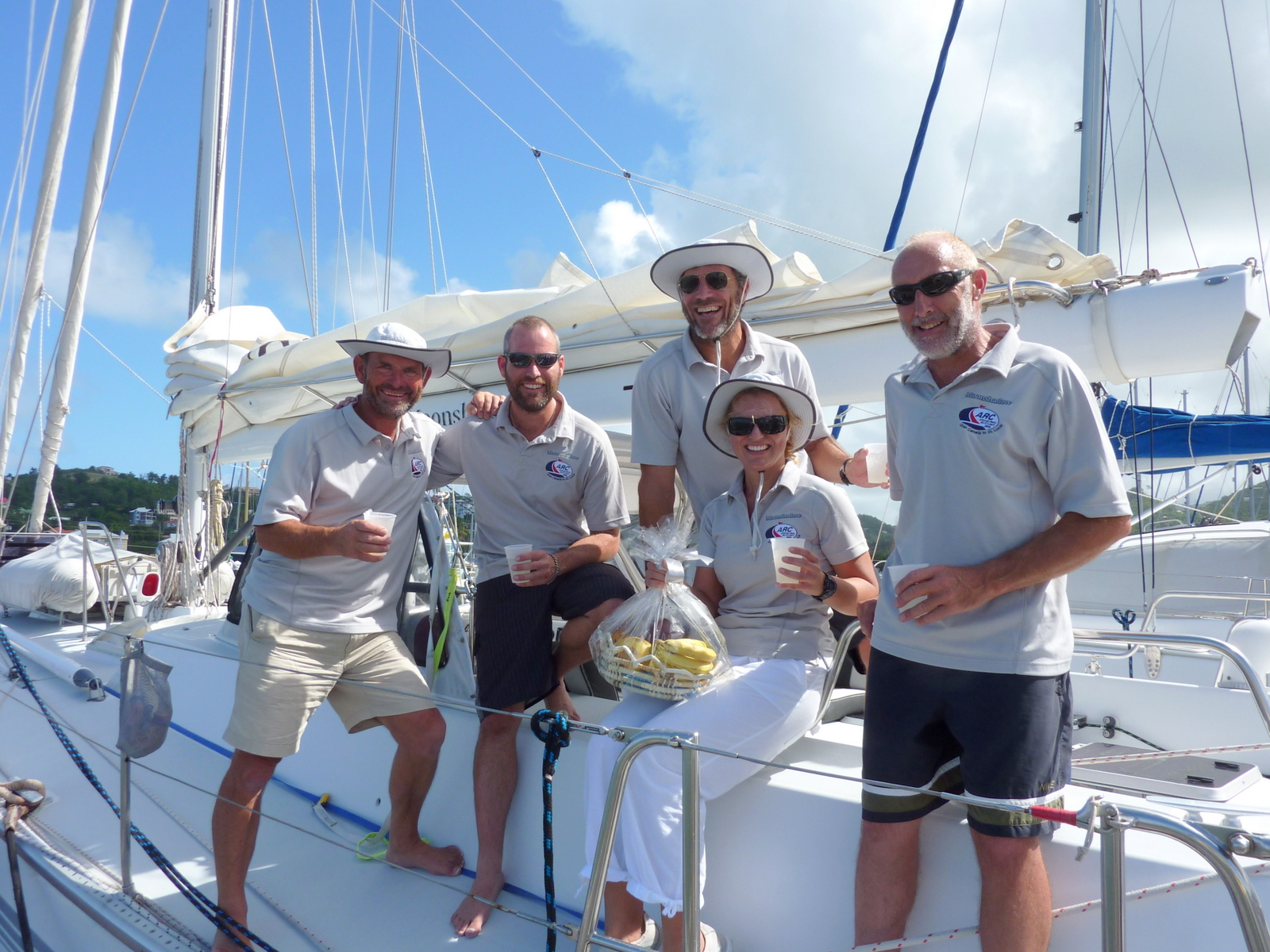